Question: Could you say a word about the ideology that’s behind the climate change, hype.

Marc Morano: “I saw a bumper sticker today, ‘Science is not a liberal conspiracy.'” 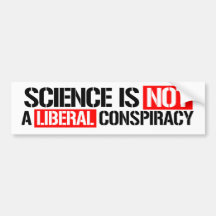 Morano: “Oh yes it is. Yes, it can be and much of it is. And here is where that bumper sticker is wrong. When the regulatory state, ie the Environmental Protection Agency’s the United Nations US federal government, the UN, EU — when they want to regulate, they look for justifications and causes and that’s the natural state of any government. So essentially the regulatory state is using climate now to achieve its ends.

And if you go back to the beginning of the, of the environmental movement of the modern environmental at the 1960s, they’ve used every environmental scare from overpopulation to resource scarcity to threat a famine to deforestation to global cooling, as an excuse to increase the regulatory powers of the state. In other words, we’re facing overpopulation we’re facing global cooling we need to redistribute wealth, we need sovereignty limiting treaties, we need more central planning, we need less freedom less capitalism. I actually point that out in my book.

‘Global warming’ is merely the latest environmental scare with the exact same solutions going back 50 years. In other words, it doesn’t really matter what the science of global warming. They actually have quotes, main figures say the science is irrelevant. The EU climate commissioner said even if we’re wrong on the science we’re doing the right thing by policy. See: EU Commissioner: Global Warming Policy Is Right Even If Science Is Wrong

What is that policy, the UN Climate chief explicitly stated — I interviewed her on this — we seek a centralized transformation that will make life on planet earth very different for everyone. See: Flashback: UN climate chief Christiana Figueres seeks ‘centralized transformation’ that is ‘going to make the life of everyone on the planet very different’ in order to fight ‘global warming’

The UN Climate sees that as the explicit goal, her assistant, a guy named Edenhofer actually said, we will redistribute wealth by climate policy is not even about environmental policy anymore. See: Flashback: UN IPCC Official Edenhofer: ‘We Redistribute World’s Wealth By Climate Policy’

This is their goal in global warming. It is merely the latest scare — you can go back and I do go back in the book, global cooling had the exact same solutions. It’s always the intervention and increasing the power of the regulatory state. See: ‘Global Warming Solutions Same As Global Cooling Cures’

That is why we’re hearing about global warming. We’re not hearing about global warming because of temperature or storms, or polar bears. It’s because they’re seeking a justification for regulations. They don’t want to argue on the merits of their policies like the Green New Deal.  They just admitted, AOC’s Chief of Staff said this was never about the climate, this was a. increase the government kind of thing a change the whole economy type of thing. Her former campaign aide actually said a similar thing that this was actually not about the climate. See: AOC’s Chief-Of-Staff Admits Green New Deal About Implementing Socialism – ‘It wasn’t originally a climate thing at all’ – It’s a ‘change-the-entire-economy thing’ & FORMER OCASIO-CORTEZ CAMPAIGN AIDE CALLS ‘GREEN NEW DEAL’ A PLAN TO ‘REDISTRIBUTE WEALTH AND POWER’ FROM RICH TO POOR

They’re openly admitting that they don’t want to argue their points on the merits. So instead they use subterfuge — we only have 12 years left or we’re facing a climate emergency — as cities and colleges are now comically declaring that across the world. That’s how global warming fears become a tool for the regulatory state.

Study in Journal Nature tries to ‘blacklist’ skeptics – Ranks Climate Depot’s Morano as NUMBER ONE ‘climate contrarian’ in the media! (#1 out of 386 skeptics)

Watch: Morano on Fox with Varney: You have been Amazon.CONNED about rainforest fires & the Democratic Party is ducking climate debates & Inslee fails

Morano: “Bernie doesn’t want to be outdone by an upstart like AOC. He is coming out with his more aggressive, more expensive, more sweeping plan. So now the burden is back on AOC is she going to come back and compete with Bernie here” I don’t know, Bernie is now the king of the Green New Deals.”

Morano: “The Green New Deal is nothing more than the same solutions they were peddling in the 1960s and 70s for the overpopulation scare for the resource scare with limited resources. All of that is the same exact solution. They’re using is global warming as the latest environmental scare to have the same solutions of wealth redistribution, sovereignty, limiting treaties, and massive intervention is central planning.

Arnold Schwarzenegger, when he was governor in a video address to the state he told Californian’s they should air-dry their clothes for six months on the clothesline — for six months in order to reduce their carbon footprint. At the same time, he was flying a daily jet to the governor’s mansion to his house.

16-year old climate activist Greta Thunberg is taking a yacht across the Atlantic because she doesn’t want to fly. First of all, the yacht is made out of carbon fiber. But they are going to have to fly the crew back to you Europe. There are going to be all sorts of flights associated with her voyage, but the symbolism of her on a yacht is all that matters. It’s all they care about.

Watch Climate Depot’s Morano on Tucker Carlson Tonight discussing Gore’s latest money-making venture. Gore lobbies for regulations that will enrich himself.
Al Gore Poised To Profit Big From Anti-Meat Drive – Largest Investor in ‘Beyond Meat’ – Via No Tricks Zone website-“Al Gore is standing to rake in millions from a World Resources Institute meat consumption reduction report, a report that will certainly help boost profits for the meat substitute manufacturers – in which Gore just happens to be a big stakeholder…Al Gore, partner and advisor to Kleiner Perkins, Beyond Meat’s big investor, stands to haul in millions, should governments move to restrict real meat consumption and force citizens to consume the dubious substitutes and fakes.”
‘Food Police’ – Watch: Morano on Fox & Friends on UN Meat report: UN seeks ‘massive expansion of the UN’s regulatory power…lifestyle controls’