UN admits ‘historic’ Paris climate pact did not save Earth after-all! Now says: Cutting CO2 ‘not enough’ – ‘We must change food production to save the world’

UN in 2019: We must change food production to save the world, says leaked report - Cutting carbon from transport and energy ‘not enough’ IPCC finds

Al Gore in 2015 on Paris pact: “Years from now, our grandchildren will reflect on humanity’s moral courage to solve the climate crisis and they will look to December 12, 2015, as the day when the community of nations finally made the decision to act."

French foreign minister, Laurent Fabius in 2015: “History is coming, in fact, history is here,” he said. “On 12 December 2015, we can have a historic day, a major date to go down in the history of mankind. The date can become a message of life."

The United Nations is now admitting that the much-hailed “historic” UN Paris climate pact did not “save” the planet and is instead “not enough” to prevent a climate change catastrophe! Despite being praised by former Vice President Al Gore, former Sec. of State John Kerry and many others, it appears the UN is demanding even more climate “action” to address what it claims is a climate problem. We must change food production to save the world, says leaked report
Cutting carbon from transport and energy ‘not enough’ IPCC finds

Attempts to solve the climate crisis by cutting carbon emissions from only cars, factories and power plants are doomed to failure, scientists will warn this week.

A leaked draft of a report on climate change and land use, which is now being debated in Geneva by the Intergovernmental Panel on Climate Change (IPCC), states that it will be impossible to keep global temperatures at safe levels unless there is also a transformation in the way the world produces food and manages land.

Humans now exploit 72% of the planet’s ice-free surface to feed, clothe and support Earth’s growing population, the report warns. At the same time, agriculture, forestry and other land use produces almost a quarter of greenhouse gas emissions.

In addition, about half of all emissions of methane, one of the most potent greenhouse gases, come from cattle and rice fields, while deforestation and the removal of peat lands cause further significant levels of carbon emissions. The impact of intensive agriculture – which has helped the world’s population soar from 1.9 billion a century ago to 7.7 billion – has also increased soil erosion and reduced amounts of organic material in the ground.

The new IPCC report emphasises that land will have to be managed more sustainably so that it releases much less carbon than at present. Peat lands will need to be restored by halting drainage schemes; meat consumption will have to be cut to reduce methane production; while food waste will have to be reduced.

[Climate school striker Greta] Thunberg admitted that the Paris Climate Accord – which would have cost the United States trillions of dollars and hundreds of thousands of jobs – has been an abject failure.

Thunberg wrote: “…recent research shows that we are on track to produce 120% more fossil fuels in 2030 than would be consistent with the 1.5°C limit. The concentration of climate-heating greenhouse gases in our atmosphere has reached a record high, with no sign of a slowdown. Even if countries fulfill their current emissions-reduction pledges, we are headed for a 3.2°C increase.”

In 2015, the Paris climate accord gave every country in the world the ability to set its own goals to combat the climate crisis. World leaders agreed to do their part toward stopping planet temperatures from rising more than 2 degrees Celsius—later updated to 1.5 degrees—above pre-industrial levels.

Even the left-leaning New York Times admitted that the Paris Climate Accord has been a failure, reporting that “even if every country did manage to fulfil its individual pledge, the world would still be on pace to heat up well in excess of 2 degrees Celsius (3.6 degrees Fahrenheit) over preindustrial levels, the threshold that world leaders vowed to stay ‘well below’ in Paris because they deemed it unacceptably risky.” 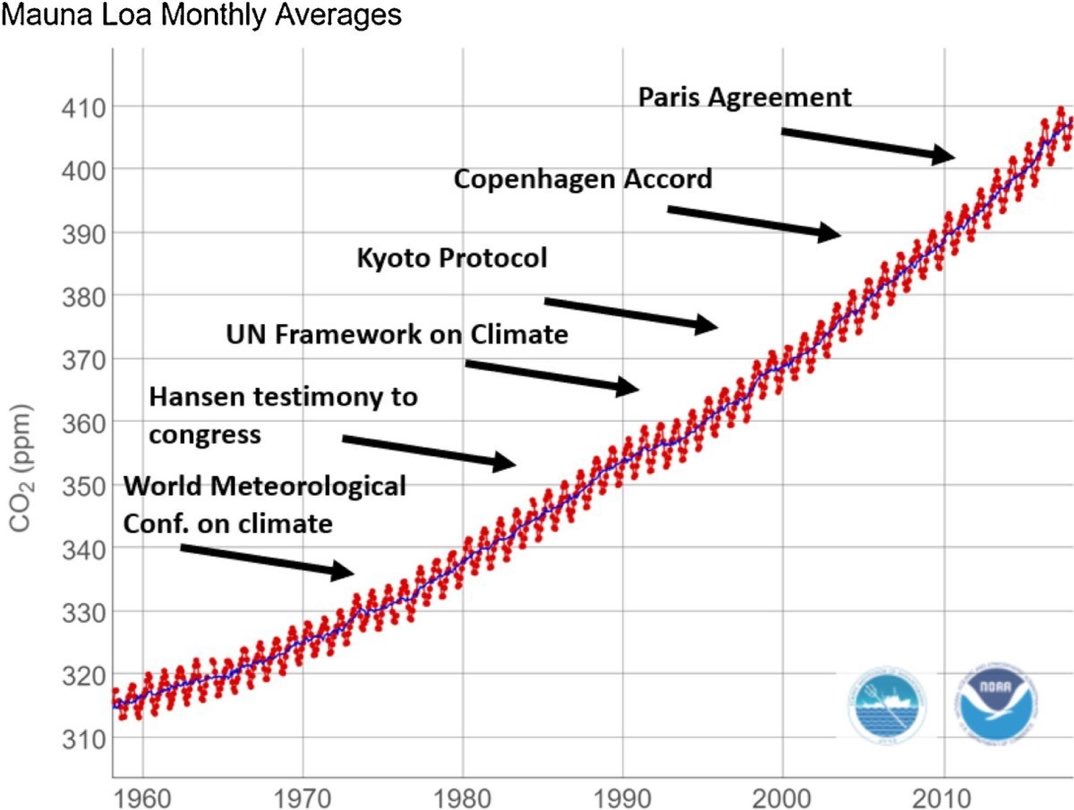 The reality is those so-called climate solutions like the UN Paris pact, cap-and-trade and carbon taxes are never enough for climate campaigners. Years later, the UN even admitted that the Kyoto protocol failed. See: 2009 Confessions Continue: UN IPCC Chair Pachauri Admits it: ‘Kyoto Protocol did not work’

See: Reality Check: Every UN Climate Summit Hailed as ‘Last Chance’ To Stop ‘Global Warming’ Before It’s Too Late – Previous ‘last chance’ deadlines turned out to be — well — not the ‘last chance’ after all. – “This was the last chance,” said Miguel Arias Canete, Europe’s climate chief about the UN Paris pact. “And we took it.” 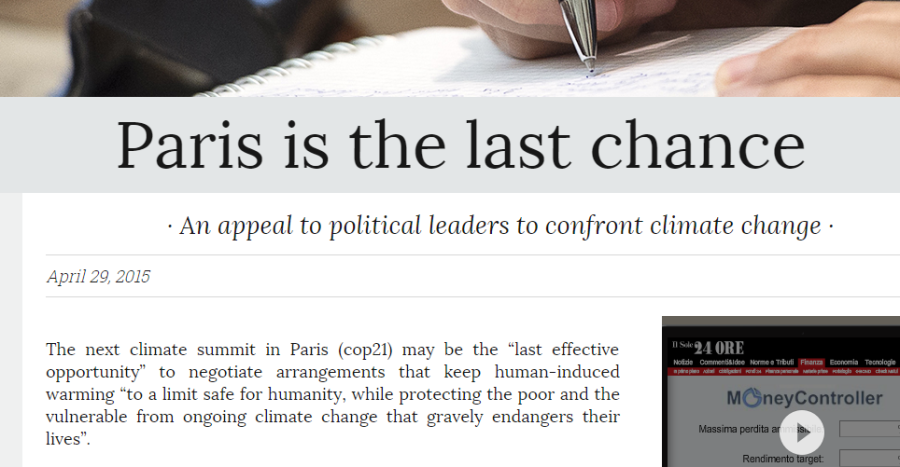 WaPo 2018: ‘The surge of optimism that came with UN Paris pact has faded – ‘Promises that are widely acknowledged to be too weak to begin with’

The UN Paris pact was supposed to have saved the Planet and “solved” global warming. Here is a small sampling of praise for the alleged “historic” climate pact.

U.N. Secretary-General Ban Ki-moon: “History will remember this day,” Ban Ki-moon said after the pact was gaveled through to thunderous applause. “The Paris agreement on climate change is a monumental success for the planet and its people.”

Al Gore on Paris pact: “Years from now, our grandchildren will reflect on humanity’s moral courage to solve the climate crisis and they will look to December 12, 2015, as the day when the community of nations finally made the decision to act,” Gore said.

The Washington Post in 2015 reported on the final passage of the Paris pact: ‘Cheers echoed up and down the tent city where thousands of journalists, activists and business leaders awaited news of the deal, which was sealed during the final 48 hours of nearly non-stop talks.”

WaPo reported: President Obama, in an appearance at the White House, hailed the agreement as a “turning point for the world,” adding, “We came together around the strong agreement the world needed. Together we’ve shown what’s possible when the world stands as one.”

Secretary of State John F. Kerry said after the accord was announced: “This is a tremendous victory for all of our citizens–not for any one country or bloc, but a victory for all of the planet, and for future generations.”  “The world has come together behind an agreement that will empower us to chart a new path for our planet: a smart and responsible path, a sustainable path.”

Economist Lord Stern added: “This is a historic moment, not just for us but for our children, our grandchildren and future generations. The Paris agreement is a turning point in the world’s fight against unmanaged climate change which threatens prosperity.

Former French president, François Hollande, said: “This is a major leap for mankind.”

Fmr. British prime minister, David Cameron, also welcomed the deal, praising those involved for showing what ambition and perseverance could do. “We’ve secured our planet for many, many generations to come – and there is nothing more important than that,” he said.

French foreign minister, Laurent Fabius:  “History is coming, in fact, history is here,” he said. “On 12 December 2015, we can have a historic day, a major date to go down in the history of mankind. The date can become a message of life.”

Newsweek OPED: THE PARIS AGREEMENT WILL SAVE OUR LIVES

Climate Depot’s Marc Morano: ‘Now that the United Nations has officially ‘solved’ man-made global warming, does this mean we never have to hear about ‘global warming’ fears again!? Does this mean we can halt the endless supply of federal tax dollars funding ‘climate change’ studies? Does this mean we can stop worrying about ‘global warming’s’ ability to end civilization and cause wars, and increase prostitution, bar room brawls, rape, airline turbulence, etc.? Can we finally move on to other issues? I spent the last week in Paris marveling at how so many believe a form of modern witchcraft: That a UN agreement or EPA climate regulations can alter Earth’s temperature and the level of storms. But now I realize that if they truly believe the UN has solved ‘climate change’ even skeptics should rejoice! Now that the UN treaty has ‘solved’ global warming, can we all just move on to something else?’

Flashback 2015: Rush Limbaugh praises Morano for understanding UN Paris climate treaty – Rush Limbaugh: “You know Marc Morano — since you bring that up — our former man in Washington. At Rush Limbaugh the TV show we had a roving man in Washington with a camera and a microphone that went around and harassed Democrats whenever he could find them, and usually he found them when they were a little tipsy, they’d been consuming adult beverages. It was funny. Well, Morano now runs a global warming website, an anti-global warming website, and he asked a great question…My only point here, Morano says, since they signed this deal, since they’ve now fixed it, can we stop hearing about it? And I think that is a brilliant question, because we will not stop hearing about it…But, anyway, it’s just a good question. Okay. So you guys in Paris, you got a deal, and it’s done. Can we please stop hearing about it? And the fact that we will not stop hearing about it means it isn’t about global warming. Just mark my words on this.

2019: UN Pushes for ‘Paris Agreement on Steroids’ – According to Marc Morano, bestselling author of The Politically Incorrect Guide to Climate Change,  the proposed treaty is far more dangerous than the Paris Climate Accord from which President Trump extricated the U.S. last year. Morano told Fox: “This new global environmental pact will have more teeth and cover more aspects of human civilization than the U.N.-Paris climate pact. This new environmental pact is looking to be the U.N. Paris agreement on steroids because they are making it binding, and it appears even wider in scope.”

‘No Trick’s Zone’s Pierre Gosselin: ‘New UN ‘Historical Draft’ Is Delusional …Will Go Down In History As Certificate Of Madness – Reading it I couldn’t help but think this is a document of madness. Global temperature cannot be regulated. It’s delusional to think so. Unless you’re going to make money from it, why would anyone want to sign it and ensure a place in history’s Laughing Stock Hall of Fame?’ 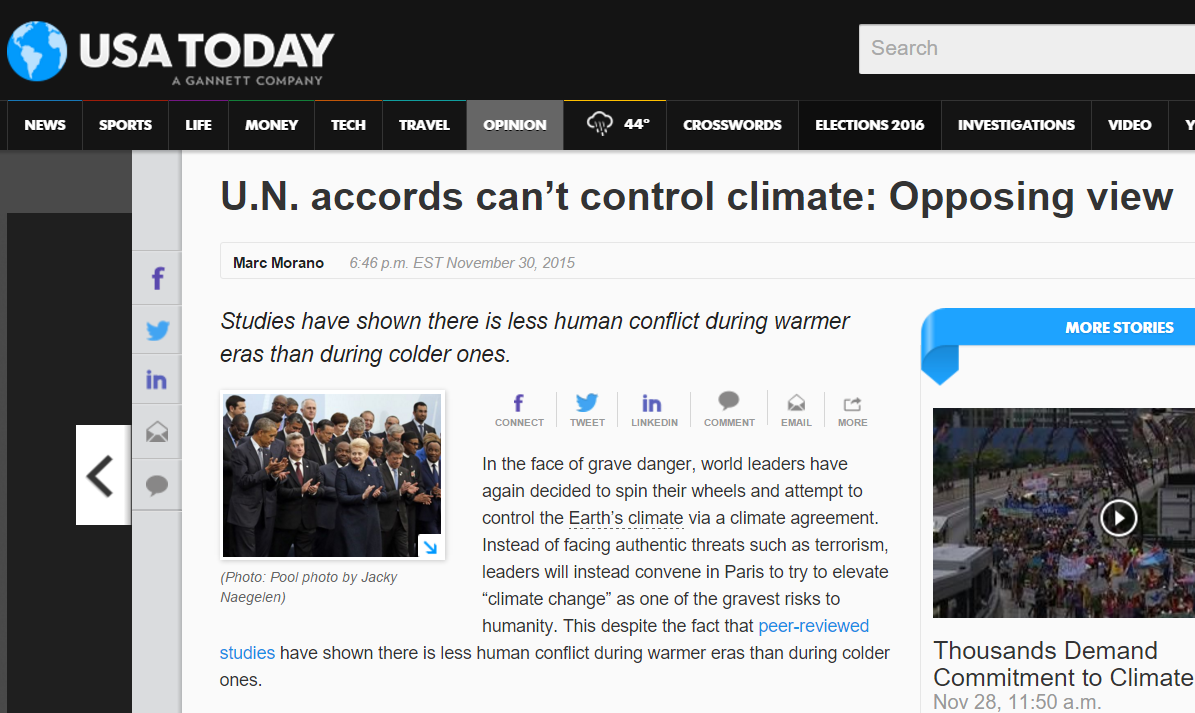 Marc Morano in USA Today’s ‘Opposing View’ on UN summit: “The U.N. summit’s goal of limiting the Earth’s temperature to a rise of no more than 2 degrees Celsius is also not based on science. The Climategate emails revealed that even U.N. scientists admitted that the 2-degree goal was “plucked out of thin air.” The notion that a U.N. agreement to limit emissions will somehow alter the Earth’s temperature or storminess is bordering on belief in witchcraft.”

Morano: ‘If we faced a climate catastrophe and had to rely on the U.N. to save us, we’d all be doomed! Nothing the U.N. is proposing to “solve” climate change would have any measurable impact on temperatures or storminess, even if you accept their scientific claims.’