Morano: "This is nothing more than regulatory lifestyle controls by the UN. They are empowering themselves with this report...This is an open call by the United Nations for activist policies in taxes and regulation. And we have seen activists come out with ideas like the meat patch, like a nicotine patch, which would induce allergies to people so they won’t eat meat. It’s getting whackier and whackier."

"What's interesting is back in the 1970s, they predicted a food catastrophe based on the global cooling scare."

Brian Kilmeade: The latest item on the chopping block for climate change activists. A new report from the UN says eating less meat is crucial to saving the planet. The planet we are discussing is Earth. Here to weigh in from ClimateDepot.com and author of The Politically Incorrect Guide To Climate Change. Marc Morano. Marc, If we don’t stop eating meat, what will happen to the planet? Nothing good according to the UN. Marc Morano: >> The UN Is at it again. After already saving the planet in 2015 with the UN Paris agreement. They had celebrations and claimed they finally solved ‘global warming.’  They are now saying they didn’t save the planet after all with the UN Paris pact. (See: UN admits ‘historic’ Paris climate pact did not save Earth after-all! Now says: Cutting CO2 ‘not enough’ – ‘We must change food production to save the world’) Now we need a massive expansion of the UN’s regulatory power by limiting and reducing and actually getting rid of meat-eating altogether.

Kilmeade: The U.S. eats more meat they claim. The avg. American consumption of beef 57 pounds per year. Poultry 110lbs and pork rinds 50lbs. What do those numbers do to the environment?

Marc Morano: They claim that meat-eating is one of the most destructive environmental practices. Emissions from cows in past UN reports claimed to account for more emissions than all of the transportation sector — airlines, planes, automobiles, combined. [See: Cow ’emissions’ more damaging to planet than CO2 from cars: UN report: ‘Livestock are responsible for 18 per cent of the greenhouse gases that cause global warming, more than cars, planes and all other forms of transport put together’] The UN has made the cow its primary target. This goes into the Green New Deal as well. The Green New Deal is going after meat-eating as well.

If your behavior — like eating meat — is at odds with the climate agenda you are at odds with the regulatory state. They are talking about huge taxes, a proposed 19% tax in Germany right now.

Kilmeade: If we have to get rid of the energy sector because now we have to tell the farmers and tell those ranchers to get rid of cattle, is anyone going to work anymore? Meanwhile, here’s a look at how much we have. They say America eats 25% of the world’s meat. So, again, all eyes on us.

Marc Morano: All eyes on us. What’s interesting is back in the 1970s, they predicted a food catastrophe based on the global cooling scare. (In 1974, a CIA report warned of a potential food a coming food crisis due to global COOLING.) 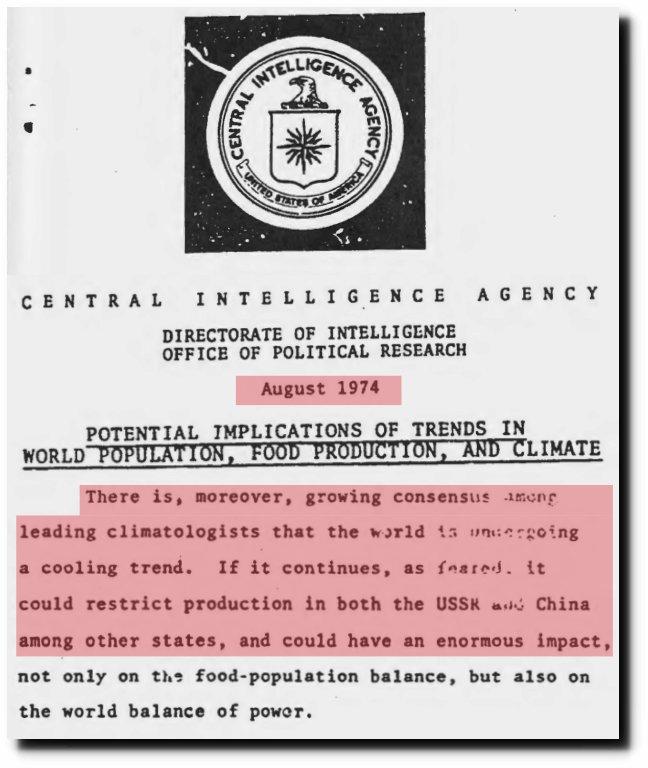 [CIA Report August 1974: “Potential implications of trends in world population, food production, and climate”: Excerpt: “There is, moreover, growing consensus among leading climatologists that the world is undergoing a cooling trend. If it continues, as feared…could have an enormous impact, not only on the food-population balance, but also on the world balance of power.”]

Morano: Now they are saying because of global warming, they claim we need to change meat habits. This is nothing more than regulatory lifestyle controls by the UN. They are empowering themselves with this report. They claim more than 100 experts came together. This is an open call by the United Nations for activist policies in taxes and regulation. And we have seen activists come out with ideas like the meat patch, like a nicotine patch, which would induce allergies to people so they won’t eat meat. It’s getting whackier and whackier. [See: Flashback: NYU Bioethicist Prof. Liao on Eating meat: Seeks to ‘Make ourselves allergic to those proteins…unpleasant reaction…The way we can do that is to create some sort of meat patch’]

Morano: They are dead serious. They are going after meat-eating in a way we have never envisioned.

Kilmeade: How soon before protesters go into a restaurant and find people with a steak and start screaming at them with loud signs. Meanwhile, the co-chair of the UN panel on climate change says this: ‘We don’t want to tell people what to eat.’ Actually, they do. ‘But it would indeed be beneficial for both climate and human health if people in many rich countries consumed less meat and if politics would create appropriate incentives to that effect.’ Appropriate incentives make it so expensive that people don’t want to eat meat.

Morano: ‘Appropriate incentives’ are taxes. Germany proposed a 19% tax on meat now to save the planet. This is what the entire agenda is about. It would have no impact on the climate. There are actually studies — one from Carnegie Mellon — showing that vegetables have three times the supposed climate impact that meat does. [See: STUDY: Vegetarian Diets ‘Worse’ For ‘Climate Change’ – Three Times ‘More Harmful to the Environment’]

Morano: There are all different ways to look at this. The UN has simplified it too. ‘We know best. We want to regulate how you eat.’

Kilmeade: And by the way, look it up we might show a little bit later said Sen. Elizabeth Warren got schooled by an Iowa farmer yesterday on a New Green Deal and everything else the Democrats stand for. Marc Morano. Thank you so much.

Warmist George Monbiot: ‘Beef is like a loaded gun, pointed at the living world’ Monbiot: “Beef is like a loaded gun pointed at the living world. It is an absolutely disastrous product.”
Are Weeds the Future of Food? seen as ‘part of the solution to boosting harvests in a warming world’
#
A sampling of Morano’s recent Fox News appearances.

Marc Morano: “This is politics, not science. The UN is trying to expand its base to include climate and species. They’re looking for more treaties, more regulation. They’ve identified a problem. They’ve juiced it up and they put themselves in charge of solving the problem. That’s called a self-interested lobbying organization.”

Watch: Morano on Fox on Google vanishing Greenpeace co-founder: ‘Google is frighteningly following the pattern’ of Soviet airbrushing of history