Are Weeds the Future of Food? seen as ‘part of the solution to boosting harvests in a warming world’

Weeds that resemble knee-high grass grow in planter pots in a small room at a U.S. Department of Agriculture (USDA) lab just outside Washington, D.C. Light, heat and carbon dioxide reach the plants at steady levels. For more than a month, the weeds have sustained the same conditions expected to be Earth’s norm 35 years from now—carbon dioxide levels equivalent to an urban traffic jam, and temperatures tipping into the dangerous zone for the planet’s health. 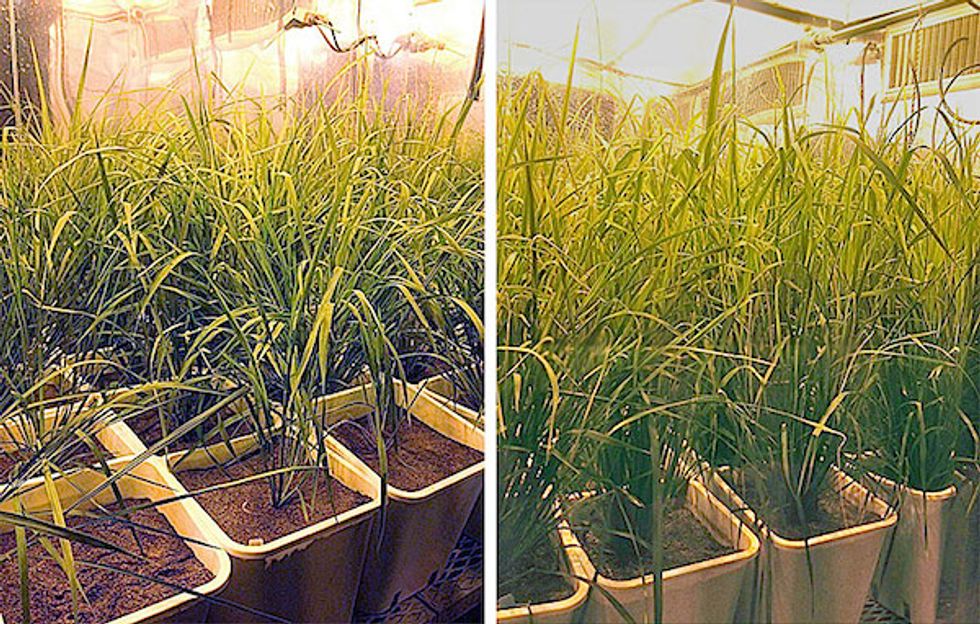 On the left is bushy red rice, technically a weed, under standard growing conditions at a USDA lab near Washington, DC. On the right, red rice at the USDA lab grows taller and thicker after being exposed to elevated levels of CO2 and higher temperatures, mimicking conditions plants will face this century as the world warms. Photo credit: Lisa Palmer

But rather than choking from such treatment, the weeds—a wild plant called red rice—are thriving. The test lab mimics conditions expected around the world by 2050, when an additional 2.6 billion people will be wondering what’s for dinner.

Lewis Ziska, a plant physiologist with the USDA’s Agricultural Research Service, studies, among other things, weeds in food production and human health. Weeds beguile Ziska. Weeds may be the largest single limitation to global crop yield. But they also have traits that are useful to plant growth. Red rice, for instance, can adapt to more carbon dioxide and heat by producing more stems and grain—red rice has 80 to 90 percent more seed than cultivated rice.

Now, plant breeders and plant physiologists are capitalizing on those traits and counting on all possible sources of genetic variation, including weedy lines of rice, to improve productivity in cultivated crop varieties. Such cross-breeding could play an important role in helping the world’s staple food crops better adapt to a warming climate.

Plant physiologists such as Ziska usually put weeds in two categories: “an unwanted or undesired plant species” and “early vegetation following soil disturbance.” Ziska thinks a third definition could be more suitable: the unloved flower. “A weed is a plant whose virtues have yet to be discovered,” he says, paraphrasing Emerson.

Ziska is not the only one with this perspective. Many scientists now believe that weeds may be part of the solution to boosting harvests in a warming world. Wild lines of wheat, oats and rice—which are, in fact, weeds—have genetic characteristics that may be useful to adapt their domesticated cousins to an uncertain future.

Why weeds? When other plants are wilting at extremes of temperature and rainfall, weeds thrive. Ziska studies weeds for their redemptive qualities. His research in this area was bolstered on a sweltering day in an abandoned industrial lot in Baltimore, 25 miles from his USDA research center, where he observed weeds that were two to four times bigger than weeds growing on his rural test plot. The urban weeds prompted further research on weeds that could be valuable to raising crops in high-carbon, high-heat scenarios.

Ziska tries not to call red rice a weed. Sometimes he calls it skanky rice, but mostly he refers to it as wild or feral rice. All crop plants were wild at some point. They became domesticated in the same way cows and pigs became domesticated on farms: through breeding and selection. Wild and feral crop relatives are the original source of raw genetic material from which all modern crop varieties were first developed, but these reservoirs of natural variation have not been well studied.

Breeding from wild, ancestral plant populations may hold the key to creating crops of the future. Wheat breeding has already made significant progress in producing weedy lines, which have led to the cultivation of edible wheat. Because it has a large genome, wheat can incorporate traits that better withstand heat and drought. Matthew Reynolds, head of the wheat physiology program at the International Maize and Wheat Improvement Center in Mexico City, says that wheat producers are fortunate because they are slightly ahead of the curve in developing heat- and drought-resistant varieties. 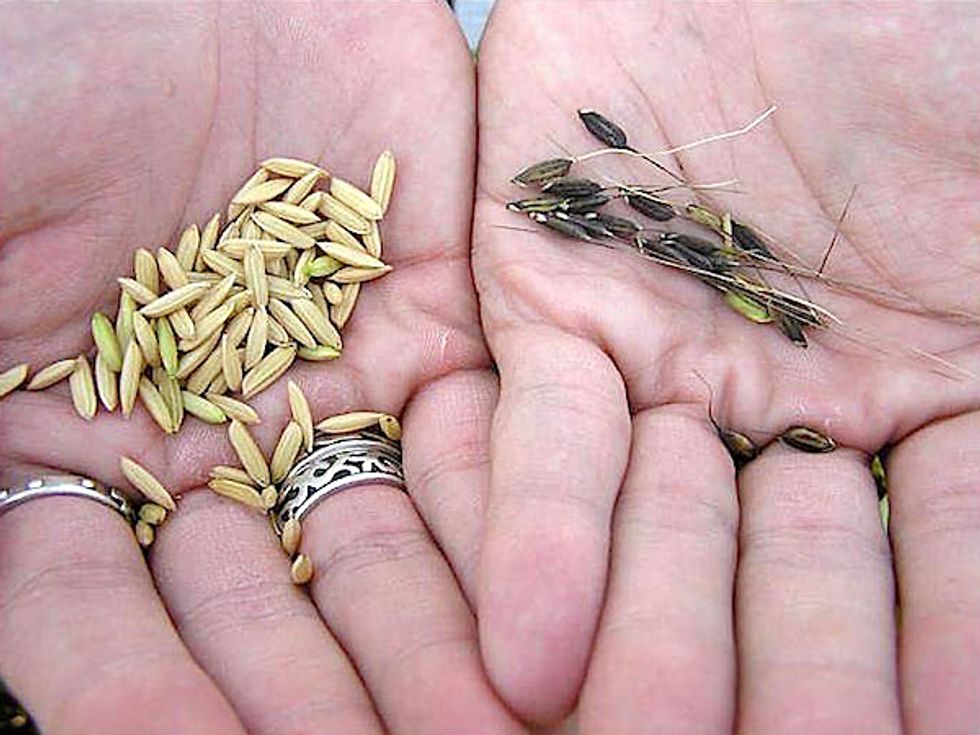 A standard rice variety, at left, with a red rice variety—technically a weed—at right. Red rice has 80 to 90 percent more seed than cultivated rice, but it is almost impossible to harvest because the seeds fall to the ground and shatter. Photo credit: N. Burgos/ University of Arkansas

The value of using wild relatives of crops as sources of environmental resilience and resistance to pests and diseases led to an estimated $115 billion in annual benefits to the world economy by 1997, primarily through increased production, according to research at Cornell University.

Although seeds are readily accessible in 1,700 gene banks throughout the world, “they are not used to their full potential in plant breeding,” said Susan McCouch, a plant geneticist at Cornell. “There are still vast reserves of valuable genes and traits hidden in low-performing wild ancestors and long forgotten early farmer varieties that can be coaxed out of these ancient plants by crossing them with higher-yielding modern relatives. These crosses give rise to families of offspring that carry a myriad of new possibilities for the future.”

McCouch says the plant breeder’s job is to utilize a combination of insight, field experience, technology and innovative breeding strategies to select the most promising offspring and prepare them for release as new varieties. The breeding system allows ancient traits and genes to be constantly recycled and recombined, giving rise to an infinite range of new possibilities with every generation.

“The same process happens in nature,” McCouch said, “but the plant breeder can bring together parents from diverse sources that would never have found each other in the wild.”