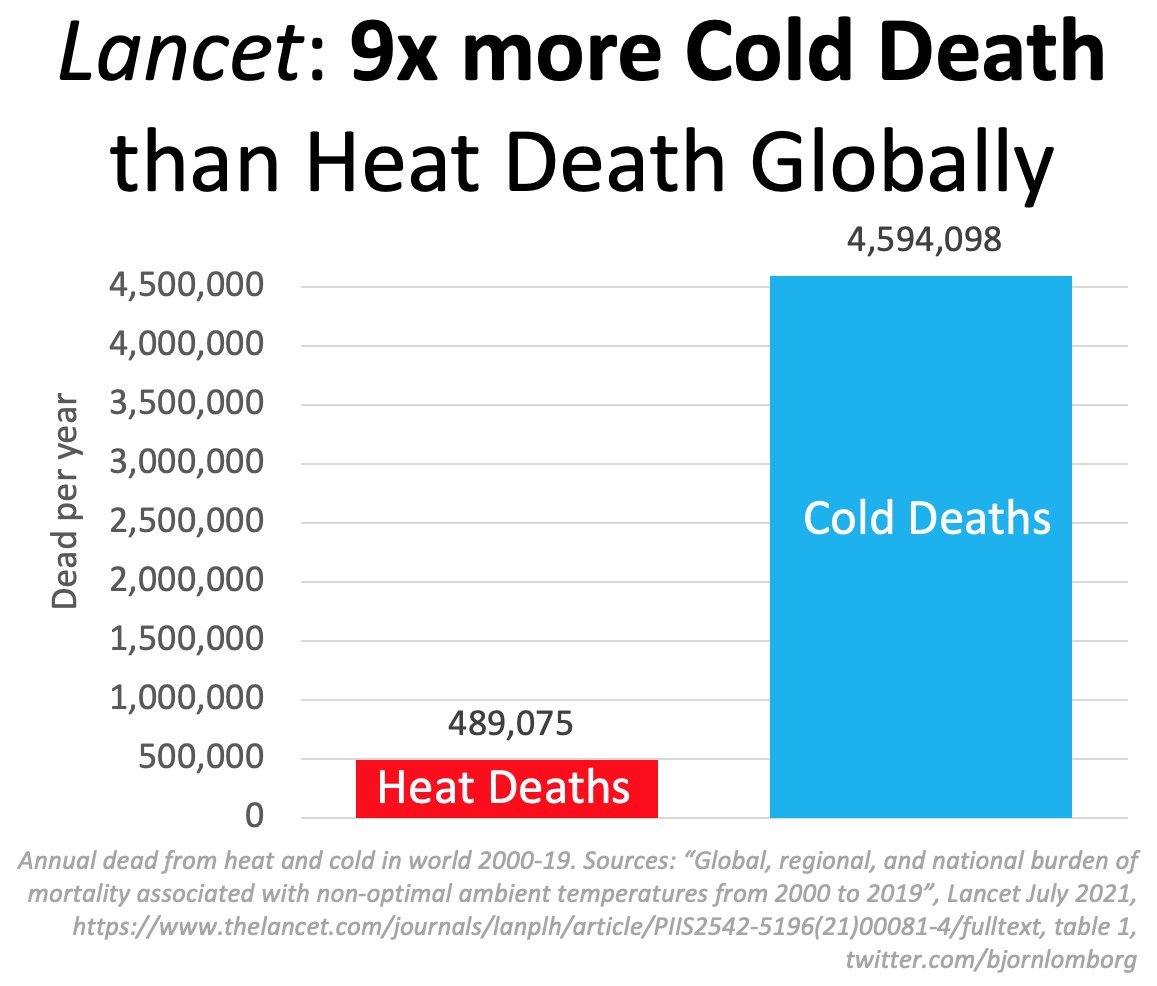 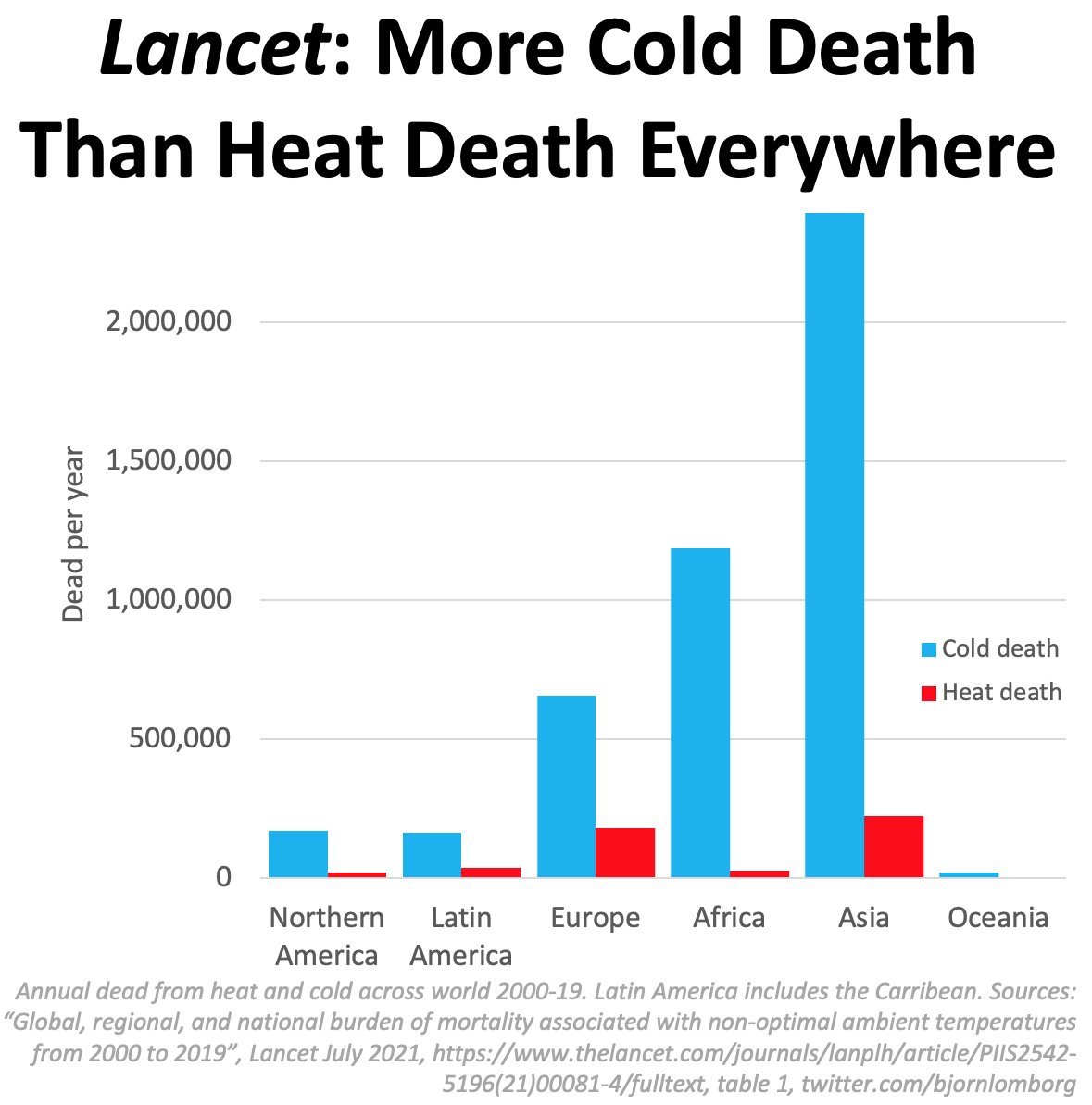 This news shouldn’t surprise you a bit, but given the global warming hysteria it might still do so.

According to a study published in The Lancet, cold weather is far more deadly than excessive heat. In fact, for every person in the world who dies due to some heat-related cause, 9 die due to excessive cold.

Common sense and the barest knowledge of history tells us this, and The Lancet’s study merely confirms (and amplifies) what every sentient human being already knows. It’s not like there are mass migrations of human beings from warmer climes to colder ones. People rarely retire to Siberia or even Minnesota. The flow goes the other direction.

Cold kills much more than heat on every continent

Yet, most reporting focus on heat deaths, because it fits the climate narrativehttps://t.co/4k5eU2IaGa pic.twitter.com/TqdUxGwJ6H

But we don't hear

Reporting focus on heat deaths, because it fits the climate narrative

Here is the full, academic overview of heat and cold deaths 2000-19https://t.co/4k5eU2r7Ea pic.twitter.com/O6xLa9Mdaw

There is a reason why the Medieval warm period has been referred to as a “climate optimum”–it was a time when the range of human flourishing expanded greatly. Grapes were grown in Great Britain, and agriculture thrived throughout Europe. A warmer climate was far better for human beings than previous or subsequent periods. Go back 10 millennia and much of the Northern hemisphere was covered in ice, and the human population was measured in the millions, not billions. 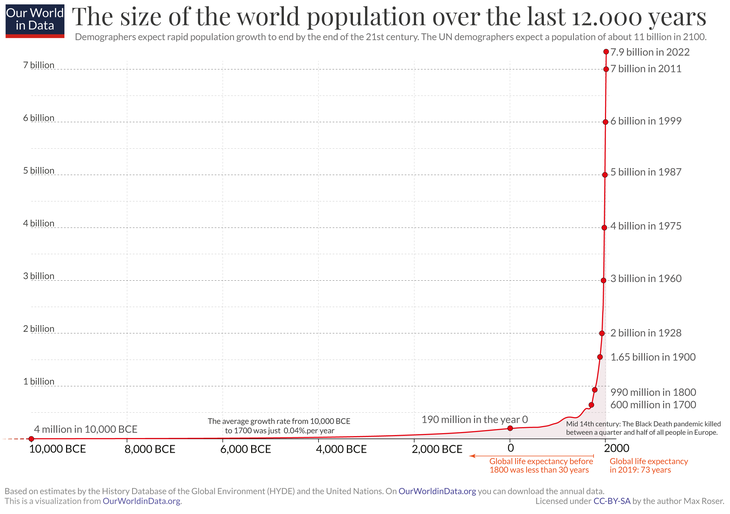 A cold Earth is a nearly dead Earth. A warm Earth is filled with life. Go to the tropics, then visit northern Canada. The difference is stark. 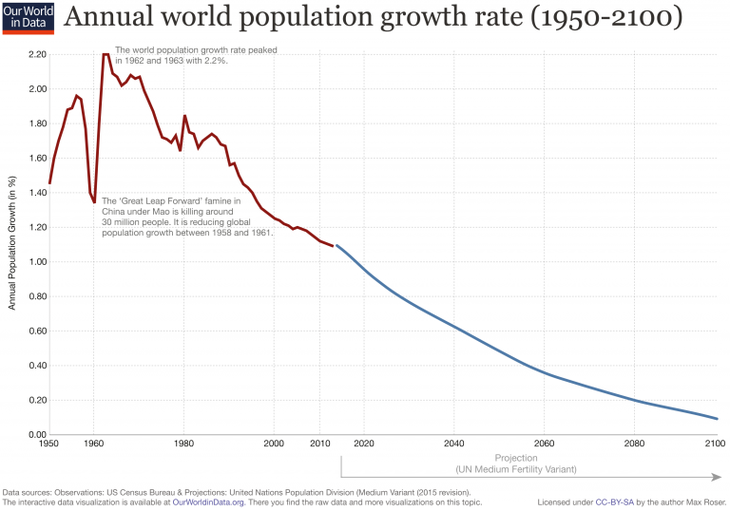 If you are excessively worried that the human population is outgrowing its ability to feed itself, fear not. As our population has skyrocketed over the past few decades the growth rate has slowed drastically, and will continue to do so. If I were you I would worry more about the rapid aging of our population than being overwhelmed in a Soylent Green population bomb. This is one reason why pro-natalists are worried so much–as the population ages out our social welfare states will be put under greater and greater strain.

Perhaps, though, that too will be overcome by technology. Japan is struggling with these issues and is trying to adapt to changing demographics. Immigration is not on the table there, unlike in many Western countries for good or ill. 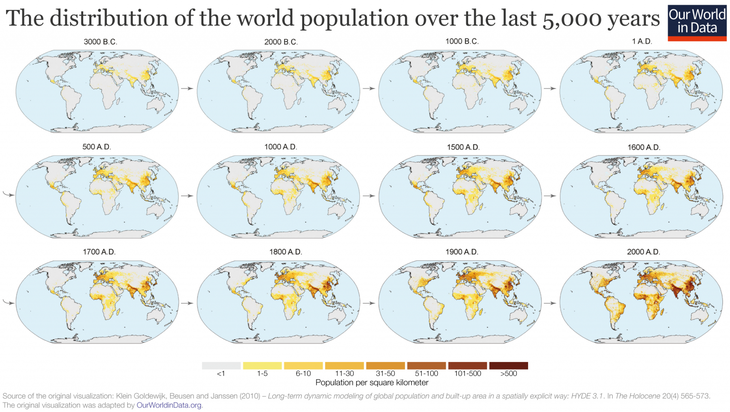 A quick view of the geographic distribution of population over time also reaffirms my assertion that we need not fear a warming of the Earth’s effects on human well-being. As you can see, human population has traditionally been concentrated around the equator, and to a great extent still is. Our ability to live in colder climates is an adaptation, not a normal optimal condition for human flourishing. Nobody’s vision of the Garden of Eden includes snow, because cold sucks.

The only arguments for worrying about global warming that have any traction with me have to do with changes to the ocean flows and chemistry. The ocean has far more impact on climate and weather conditions than the chemistry of the atmosphere. It is an enormous heat sink, distributes energy around the globe (which is why much of Europe is quite temperate despite being at high latitudes), and of course we know little about the ocean’s ecosystems.

Were I a climate scientist I would focus my efforts on two things in particular: the effects on ocean life of changing ph values, and the effects of melting Greenland glaciers on the heat flow in the Atlantic. We know far less about these things than we should, and much of the research is filled with more scaremongering projections than actual concrete knowledge.

We do know, though, that vast amounts of fresh water has been dumped into the oceans in recent times. The melting of the glaciers 10-15 millennia released unimaginable amounts of water into the oceans, and at least at that time the effects appear to have been for the better, not worse.

We often hear scare stories about 1 to 2 feet of sea level rise–for which there is sparse evidence–without any context. Since the last glacial maximum a few millennia ago sea levels have risen by hundreds of feet. 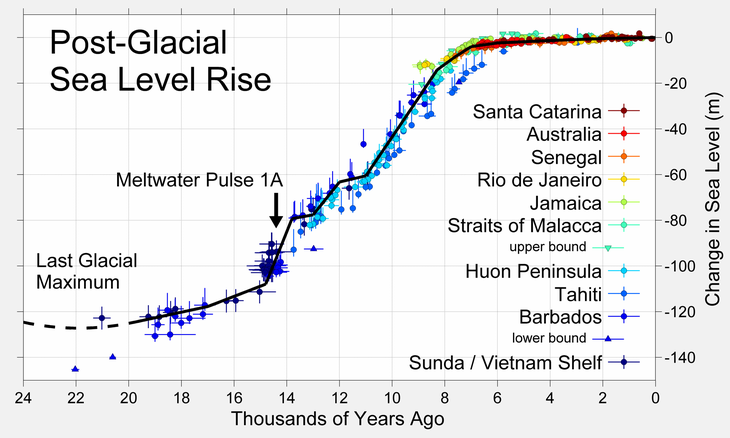 20,000 years ago the sea level was around 400 FEET lower than it is today. That is an astronomical amount of water that poured into oceans in a geological eyeblink–and as all that cold water flowed into the world’s oceans the human population exploded from less than a million to 8 billion. Any projected increase of sea levels from the melting of the world’s glaciers would literally be unnoticeable on this chart.

Which gets us back to The Lancet study. Excessive heat is 1/9 as likely to kill a person as excessive cold, yet all we hear about is heat waves and heat misery.

The facts clearly don’t back up the Narrative™, but as usual the facts are utterly irrelevant. 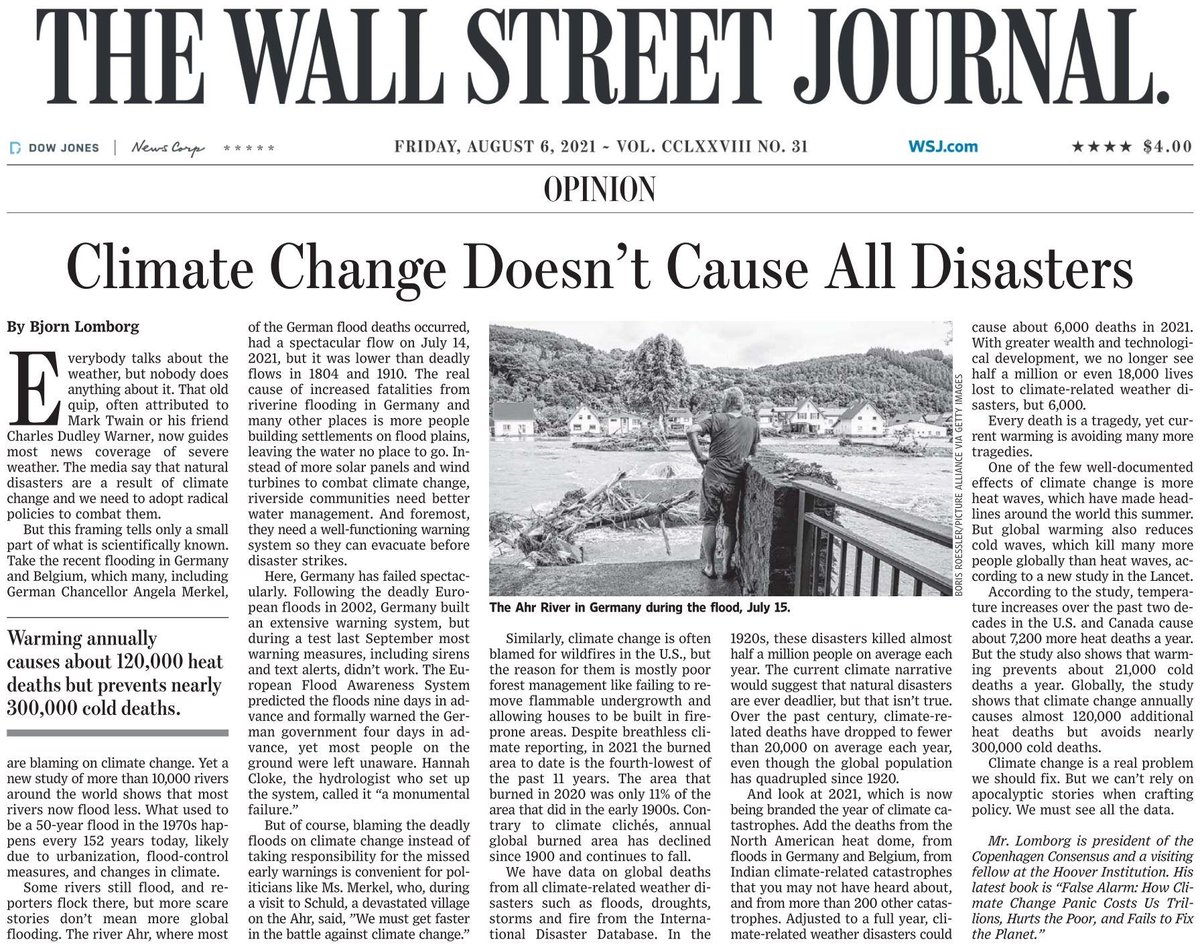 A bit of sanity in a typically stupid story from AP science reporter Seth Borenstein: ‘The increase in heat wave deaths is more than offset by reduced cold deaths in milder winters’

‘This quite simply is fraud’: Claim: Thousands of people in the UK have already died because of global warming – Ignores larger number of deaths from cold weather

Paul Homewood: “No mention in the article or the press release whatsoever about the number of cold-related deaths, which number in the tens of thousands each year…And significantly the senior author, Antonio Gasparrini, himself confirmed that cold kills more than heat throughout the world in another paper back in 2015.” …

“Needless to say their numbers are the product of computer models, which have no relation with reality. But the long list of funders, including the NERC and the EU Horizon Project  no doubt got the headlines they wanted.”

Of course, presenting science to counter a claim does not work if that science is declared ‘racist’: ‘The data is racist!’ Rhode Island professor denounces ‘science, statistics, and technology’ as ‘inherently racist’
#
Climate Staticistian Bjorn Lomborg calls Gina McCarthy’s claims “silly”: “Heart disease kills 33% and cancer 26% of all Americans. Heat kills 0.3% and declining. Cold 6.4% and increasing. Heat deaths have declined precipitously in the US since 1960s, much of it because of widespread availability of air conditioning.
Across world, heat deaths typically (& surprisingly) small compared to cold deaths. Here [is] India: Each year, 584,300 die from moderate cold. 47,800 die from extreme cold. Yet, almost all stories on India’s extreme weather is extreme heat (25,100/yr). Moreover, most heat deaths are rather easy to tackle (which is why they are declining), bc only affect people for a few days. Cold deaths much worse, because they require months of good heating (why they increase).
What about extreme weather deaths? “These are almost nil, because societies know how to reduce deaths dramatically. Air pollution is a big deal, but almost orthogonal to climate — cutting air pollution is much cheaper (scrubbers) than cutting CO₂ (replace with renewables).”
Posted January 27, 20213:06 PM by Marc Morano | Tags: astrology, biden, health, identity, McCarthy, mkey