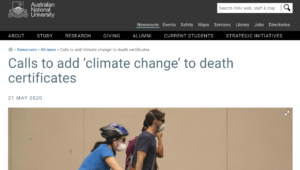 Cause of Death? Climate Change.

"Climate change is a killer, but we don't acknowledge it on death certificates," co-author Dr Arnagretta Hunter, from The Australian National University (ANU) Medical School, said. "There is second component on a death certificate which allows for pre-existing conditions and other factors.

"If you have an asthma attack and die during heavy smoke exposure from bushfires, the death certificate should include that information. We can make a diagnosis of disease like coronavirus, but we are less literate in environmental determinants like hot weather or bushfire smoke." ...

"Climate change is the single greatest health threat that we face globally even after we recover from coronavirus," Dr. Hunter said.

Professors in academia are touting a new study that is being used to call for “climate change” to be added as a cause of death on death certificates. “Climate change is a killer, but we don’t acknowledge it on death certificates,” co-author Dr. Arnagretta Hunter, from The Australian National University (ANU) Medical School, said. The study was published May 20, 2020 in The Lancet Planetary Health.

Given the focus on COVID-19 infection rates and death tolls, it appears the climate activists in academia may want in on the scary and emotional death toll counts in order to draw attention back to their climate cause.

Hunter explained: “There is second component on a death certificate which allows for pre-existing conditions and other factors. “If you have an asthma attack and die during heavy smoke exposure from bushfires, the death certificate should include that information.”

“We can make a diagnosis of disease like coronavirus, but we are less literate in environmental determinants like hot weather or bushfire smoke.” …  “Climate change is the single greatest health threat that we face globally even after we recover from coronavirus,” Dr. Hunter said.

The study claims: “Death certification needs to be modernized, indirect causes should be reported, with all death certification prompting for external factors contributing to death, and these death data must be coupled with large-scale environmental datasets so that impact assessments can be done.” Ron Clutz of Science Matters ridiculed the study: “No doubt they noticed how powerful were the Covid19 death statistics in getting the public to comply with lockdown regulations. Their logic is clear: When people die with multiple diseases, pick the one that’s politically useful. (‘Never let a crisis go to waste.’)”

They discovered a way to boost fear and keep control! Simple, too. Just add "climate change" to death certificates. https://t.co/wrbnAuUpeG

All drownings are now caused by rising sea levels

The climate skeptic blog Tallbloke was not receptive to claims that “climate change” should be added to death certificates. “Climate alarmists yet again strain credulity to the limit, no doubt hoping to stir up guilt in the populace about energy use,” the blog noted.

Dr. John Dunn told Climate Depot: “The claim that brushfire inhalation or respiratory conditions could be attributed to climate change is remote causation for sure, the fires in Australia were, in many cases, known to be caused by arsonists. Does that mean the death certificate for someone who allegedly died from smoke inhalation is the victim of an arsonist? This is the pattern–the left decides they can use deaths as an effective method of silencing dissent to their theories. This is a pure propaganda project, and it comes from physicians who should know better when faced with their obligation to give a science-based Cause of Death. Otherwise Death Certificates are going to be nothing more than another weapon of the political agitators and advocates.”

A comment on the Tallbloke blog also ridiculed the study’s claims, noting: “Australia must have a lot of health threats if the ‘single greatest’ one accounts for 2% of the mortality rate.”

Thomas Lifson writing in American Thinker explained: “Perhaps inspired by the success of Coronavirus fearmongering in impoverishing the formerly prosperous West, global warming enthusiasts are beginning to agitate to list “climate change” as the cause of death on death certificates.” – Just wait for the headlines about “Millions killed by climate change.” And “Climate change death toll mounts.” If it bleeds, it leads. Politicized science is now a fact of life in the Western world, undermining the very foundations of the technological and material progress that liberated the mass of humanity from permanent poverty, the normal state of affairs until the scientific and industrial revolutions changed the state of civilization. Stalin was the pioneer in bending science in service of a political agenda, and under him, Trofim Lysenko led the charge to corrupt science, which ended disastrously when agriculture was forced to accept practices based on phony science. Lysenkoism is the name given to the practice of bending science to politics.

Richard Baehr imagines all sorts of conversations once “climate change” is listed as a cause of death:

Honey I got the results from the doctor.it’s bad.

What then- heart problem?

OMG how awful. How long do you have?

Depends on emissions this summer.

Greta told me to be strong.

If “climate change” becomes a cause of death listed on death certificates, it could result in some interesting reading. Many climate activists have claimed that “global warming” will lead to cannibalism. See: Warnings of climate cannibalism are nothing new: Ted Turner in 2008 warned that AGW survivors ‘will be cannibals’ & Paul Ehrlich warned in 2014 that ‘climate change’ will force humans to ‘eat bodies of dead’

See: Say what?! U. S. Department of Transportation asks: ‘How might climate change increase the risk of fatal crashes in a community?’

So if Gore is correct that “climate change” impacts “every organ” in the human body, that could mean that anyone who dies of organ failure could now be listed as a “climate change” cause of death.

If someone dies from a car crash, cancer or organ failure, “climate change” could be listed as a cause of death on a death certificate.

Recent scientific research has countered the claims of a health threat from climate change.

See: Study Finds We’re Winning The War On Climate-Related Diseases – ‘A wholesale rolling back of the biggest killers like diarrhea and malaria’

&
We Are Winning The War On Climate-Related Diseases – ‘Dramatic falls in climate-related mortality over the last 30 years’
New Study by Dr. Indur Goklany: ‘Global Warming Policies Might Be Bad for Your Health’ – ‘Issues of poverty like malnutrition and unsafe water have a global impact of death and disease 70 times larger than that of theoretical climate change’ Heat-related deaths have been “substantially underreported” on Australia’s national records, according to experts from The Australian National University (ANU).

Researchers say the amount of deaths attributed to excessive natural heat is at least 50 times more than recorded on death certificates.

Published in The Lancet Planetary Health, figures show over the past 11 years 340 deaths in Australia were recorded as being due to excessive heat but statistical analysis found 36,765 deaths could have been attributed to heat.

“Climate change is a killer, but we don’t acknowledge it on death certificates,” co-author Dr Arnagretta Hunter, from the ANU Medical School, said.

“There is second component on a death certificate which allows for pre-existing conditions and other factors.

“If you have an asthma attack and die during heavy smoke exposure from bushfires, the death certificate should include that information.

“We can make a diagnosis of disease like coronavirus, but we are less literate in environmental determinants like hot weather or bushfire smoke.”

“Climate change is the single greatest health threat that we face globally even after we recover from coronavirus,” Dr Hunter said.

“We are successfully tracking deaths from coronavirus, but we also need healthcare workers and systems to acknowledge the relationship between our health and our environment.

“In Australia heat is the most dominant risk posed from climate change.”

The researchers say death certification needs to be modernised to reflect the impact of large-scale environmental events.

“We know the summer bushfires were a consequence of extraordinary heat and drought and people who died during the bushfires were not just those fighting fires – many Australians had early deaths due to smoke exposure,” Dr Hunter said.

This is a brilliant tactical move by climate activists. They will have their daily death tolls just like COVID to use to force climate policies like Green New Deal on us. As the climate change "death tolls" mount, the urgency for new regs will grow greater.

‘Scaremongers’ want a ‘supercilious’ change to mortality records – Sky News host Chris Smith says a “stupid thought bubble has emerged” one which should “never see the light of day”. It comes as researchers from the Australian National University are calling for climate change to be added to death certificates. Experts said the number of deaths attributed to excessive natural heat was at least 50 times higher than the number recorded on death certificates. Mr Smith said the climate change “scaremongers” are back at it as they “propose another supercilious change to our normal lives”. “Unless you’re wandering through a desert with no water, you can rarely die from the heat alone,” Mr Smith said.

Study co-author: Our environment has always affected our mortality, should we add climate change to death certificates? – “As we respond to the global pandemic we have a remarkable opportunity to combat a number of serious threats to our human future, creating a safer, cleaner and kinder world. Part of addressing the challenge comes from recognizing the magnitude of the risk to our health.”

James Delingpole: Doctors Push for ‘Climate Change’ to Be Recorded on Death Certificates – Researchers at Australian National University (ANU) have called for ‘climate change’ to be recorded as a cause of death on death certificates. They claim that in Australia, the rate of people dying as a result of global warming may be 50 times higher than is officially acknowledged. … Climate activists around the world see the coronavirus pandemic as a crisis which they must not allow to go to waste. The timing of this letter suggests that they are learning their lessons well. They may have noted that in many countries, the medical authorities have adopted extraordinarily lax policies towards the inclusion of “Covid-19” on death certificates. In the UK, for example, as Ronan Maher has reported here and here, the Coronavirus Act (2020) includes clauses which makes it possible for doctors to put Covid-19 as a cause of death on certificates without even having seen the patient before their death — and with little independent oversight. … As the authors of the letter to Lancet Planetary Health must surely be aware, including ‘climate change’ as a cause of death on death certificates is fraught with similar difficulties. As well as being easily abused by activists with an agenda, it is impossible to attribute with any certainty even extreme weather events to climate change.

Do you see a parallel with #COVID hysteria?

It's just a way to spread fear and gain control of your life.

‘Blame White People, Science Says’ – Study: White people to blame for pollution – But blacks and Hispanics suffer the most

Blame White People, Science Says: White people are primarily the cause of the disproportionate amount of pollution inhaled by Black and Hispanic communities across the United States, new research shows.

Flashback 1846: White Men Blamed For Destroying The Climate For Over 200 Years – 1846: ‘That great changes have taken place in the climate of Australia all testimonies satisfactorily prove…It is evident to any observer,at some period, the country has been subjected to the mighty action of heavy rains, and of sweeping, deluging floods…The aborigines say that the climate has undergone this change since white-man came in country’