Note: Morano's one-on-one interview with The Dartmouth Review was conducted in person the same day Morano was a featured speaker on campus. For video of speech see here:

Morano: "This is what’s so shocking. It’s now 2022. The Green New Deal was introduced in Congress. What happened? It fizzled. There was no debate. There were no hearings. There was no scheduled vote. There were no town halls. There were no AOC infomercials. What happened? Very simple. They made a decision. And when I say they, I mean the climate activists, the Sunshine Movement, the people that helped Biden get elected. They were going to essentially try to implement the Green New Deal without a vote of Congress. And that’s what’s occurring right now. The Biden Administration in early 2021 announced that they are going to implement the climate agenda through every cabinet agency. It’s become an administrative state thing. ... They don’t want to hear from Congress. They don’t want cable news and talk radio and town halls and people flooding their offices. They don’t need these things. They’re achieving the Green New Deal the same way they did COVID. They’re not dumb."

Debunking the Climate Myth: An Interview with Marc Morano

The following is an interview between Digital Editor of the Review Lintaro Donovan (LD) and Marc Morano (MM), former Republican Congressional staffer and founder and executive director of climate change news aggregator ClimateDepot.com. He is the author of Green Fraud: Why the Green New Deal Is Even Worse than You Think (published in 2021) and The Great Reset: Global Elites and the Permanent Lockdown (published in 2022).

If you go to 1850, when the end of the Little Ice Age happened, we’ve definitely warmed. If you go to the time since the 1930s in the United States, heat waves were much, much worse in the continental U.S. during the 1930s.

One of the things that climate activists do is they start at 1970. And they say since 1970, we’ve increased our warming this much. And they’ll say, if this continues… Well, 1970 is one of the coldest periods of the 20th century.

To answer your question, yes, mankind does influence the climate. We influence it through carbon dioxide, other greenhouse gasses, but we can also cool it through aerosols.

The way to look at it is there’s hundreds of factors that influence the climate. Carbon dioxide (CO2) has been one of mankind’s contributions, but the climate is a very complex system. We’ve had many times higher CO2 levels in the past. We’re actually within the coldest 10% of geologic periods right now.

In that context, where there is no climate crisis and it’s this fiction created out of studies or timelines that have been manipulated or are incomplete, should politicians be doing anything at all to address the climate?

It’s kind of a difficult question. I worked in the U.S. Senate Environment and Public Works Committee. I worked when the Republicans both had their majority and then minority.

When it comes to environmental policy, what you need to do is what we would do regardless of whether there’s a climate crisis.

The Green New Deal wouldn’t affect global emissions. The UN Paris agreement would not even affect emissions. Assuming all the countries adopted it, there would be an imperceptible temperature difference.

It’s all virtue signaling and essentially restructuring the economy, causing a lot of pain and giving progressives that ideological vision that would do nothing for the climate.

To answer your question, we should actually promote prosperity, technology, and wealth. We should do what we’ve been doing since the first Earth Day in 1970, when we had filthy rivers, dirty air, and massive pollution.

We raised awareness and ended up with, in the 50 years since 1970, radical increases in population, radical increases in economic growth, and incredible improvements in just about everything, to the point where even mainstream media and climate activists now admit that the pollution problem has largely been solved.

Where we were and where we are now is a light-and-day difference. I would argue that we do the best environmental policy, that we invest in technology, and that we keep doing what we’ve been doing.

The major architects of the Green New Deal, such as Alexandra Ocasio-Cortez and her former chief of staff, all admit that it was never a climate thing to begin with. It was a “how do you change the whole economy?” thing. And they were borrowing from the 1960s and 1970s with Paul Ehrlich, the overpopulation scare, and the global cooling scare.

They [people like Ehrlich] literally seized on any real or perceived crisis, and they said, “This is what we need to do,” empowering the government and taking away freedom, liberty, and free choice among people.

John Holdren in the 1970s lamented that America’s problem was too much energy, too fast. He lamented that, in America, people can hop in their car and go to the grocery store to get a six-pack of beer and drive home. People like Holdren were offended by that. His ideology became sort of this anti-modernism ideology. This is, I think, what ultimately motivates the Left.

And this is where I bring in COVID. In 2000 and the beginning of the late 2000s, you had major climate activists from Tom Friedman to the U.N. climate chief to Obama’s Secretary of Energy all praising China’s one-party rule in how to deal with climate change.

China didn’t have the messiness of democracy. China was just the model in their minds of efficiency of government. So COVID comes along in March of 2020. And many aspects of the Green New Deal got enacted overnight.

Behind the Green New Deal is the plan of the degrowth movement. I’ve been to almost every single U.N. summit in the last 20 years. And people actually show up. Intellectuals. One of them was Kevin Anderson, who talked about planned recessions to fight global warming, that this is the way to solve climate change.

What happened was COVID came along, and, at first, the climate activists were jealous. John Kerry said the parallels between COVID and climate were screaming at us. Other activists basically said that “if we can do this for a virus, we can do it for climate.”

And what is the “this”? Shutting down the economy, stopping travel, turning off the greenhouse- gas machine of modern civilization. This was their dream. The reason I brought up China is it’s the Left’s progressive vision of the world (a one-party state). And the crisis helps them achieve it.

Do Alexandra Ocasio-Cortez and these public leftists in Congress truly believe that the climate crisis is some apocalypse to be addressed? Or are they just using it as a way to accomplish big government?

I do think that these are true believers. Politically left people are drawn to climate. They’re drawn to COVID. It’s kind of like the Tom Cruise movie “Jerry Maguire” when they said ‘You Had Me at Hello.’ These people were “had” by the idea that the solutions to climate change and COVID require massive intrusion of government and crushing your freedom. They’re not going to question the scientific claims too much.

AOC is a believer. She acts like a believer. She gave a 12-year deadline to solve climate change. Then she got such ridicule that she later came out and claimed that it was just hyperbole and that she was joking. But if you go back, she was never joking about it.

On the subject of children in politics, how do you think conservatives should respond when the Left trots out children like Greta Thunberg or David Hogg?

There’s no reason why you can’t have a broad energy mix. You just can’t have an irrational fear and seek net-zero [carbon emissions], which, 10, 20, 25 years from now, is going to be just sucking the life out of our energy and our economy. And it’s also a national security threat.

If you personally were in charge of an organization like a College Republicans or a Review-style conservative student newspaper, what actions would you take to stop this climate hysteria?

Science is hard. Start debating science with people, they’re not going to know what to believe.

People don’t understand epidemiology, right? So what were you told to do [during COVID]?

To shut up and listen to the experts.

You don’t want to mask your kid? You think there’s something wrong with two years of masking and Anthony Fauci as head of the world? Who are you? You’re just a parent in rural Kansas. How the hell do you know what’s best for your kid? Shut up, peasant.

The same thing happened with climate.

If I were on a college campus, the first thing I would do is to pick apart whatever someone proposed to do. Let’s talk about the Green New Deal’s impact on climate. Let’s see the numbers.

You can see this for the cap-and-trade bill. You can see it for the UN Paris Agreement. Even if you enact all of this stuff, John Kerry’s admitted it, emissions would continue to rise because of China, the developing world, and India.

Unless you’re going to somehow wave a magic wand and/or crush the billion people who don’t have running water and electricity still left in the world, you’re not going to get anywhere. Climate activism is all virtue signaling by people who are being conned into supporting an agenda of progressivism, which is too afraid to stand on its own merits and is using this sort of patina of climate change.

Either from the climate or from a virus, it’s the same thing. I would go after these “solutions” and then I would just keep an open debate.

What is the future of the Green New Deal?

What happened? Very simple. They made a decision. And when I say they, I mean the climate activists, the Sunshine Movement, the people that helped Biden get elected. They were going to essentially try to implement the Green New Deal without a vote of Congress.

And that’s what’s occurring right now. The Biden Administration in early 2021 announced that they are going to implement the climate agenda through every cabinet agency. It’s become an administrative state thing.

They saw how they could spend decades pounding their head, getting nothing passed in the climate movement. No carbon tax, no cap–and-trade, no Green New Deal, no U.N. Paris Agreement. None of it. But suddenly, COVID showed them the way: unelected bureaucracy. That’s what they’re doing. And it’s going brilliantly right now for the Biden Administration. On almost every level, every department, even in spending bills.

That’s why the Green New Deal is not going to come up for a vote. The Left is essentially implementing it all, throughout the Biden Administration, at the moment.

Watch: Morano speech at Dartmouth College following his interview with Dartmouth Review: ‘The Green New Deal: Not Green, Not New, Not a Deal’ – Discusses Climate/Energy/Covid lockdowns in 45 min. in person talk

Dartmouth Libertarians hosted Morano.
The Dartmouth Libertarians are excited to welcome Marc Morano of the Committee For A Constructive Tomorrow (CFACT) for a discussion about whether the proposed Green New Deal is a reasonable response to climate change. Marc Morano is the Director of Communications for CFACT and the producer, writer and host of Climate Hustle (2016). Mr. Morano currently serves as executive editor and chief correspondent for CFACT’s award-winning ClimateDepot.com, a news and information service he founded in 2009. During his tenure as senior advisor, speechwriter, and climate researcher for U.S. Senator James Inhofe (R-OK), he managed the communication operations of the GOP side of the U.S. Senate Committee on Environment and Public Works. Mr. Morano received his Bachelor of Arts in Political Science at George Mason University.
#
Morano goes Ivy League! Will speak at Dartmouth on Feb 10 on Folly of Climate Agenda: Libertarians host Marc Morano and Paul Driessen of CFACT next Thursday, February 10 for a discussion on the pitfalls of green energy proposals and modern energy needs. 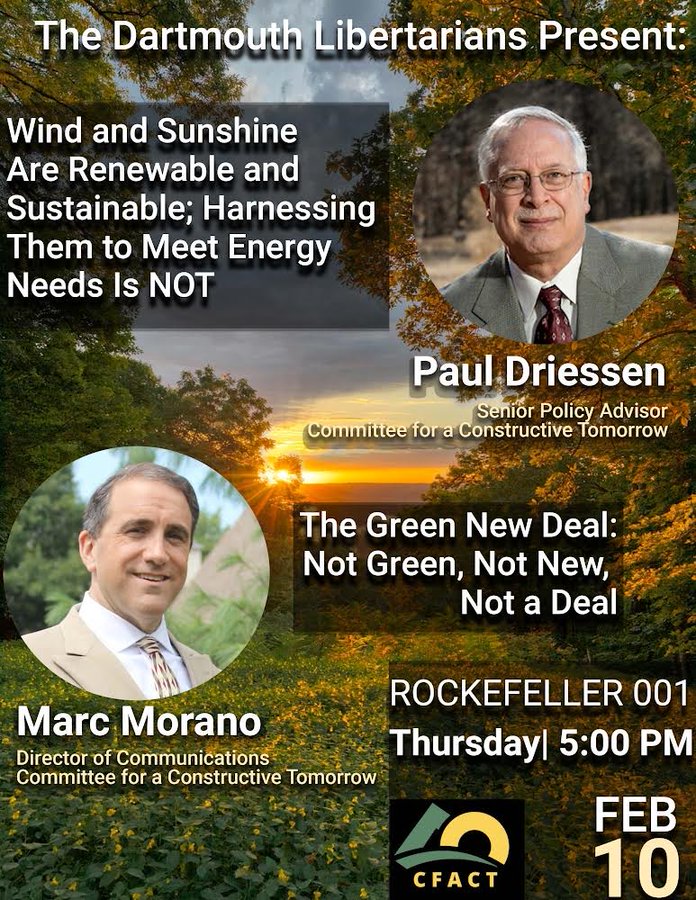