New Evidence That the Ancient Climate Was Warmer than Today’s – ‘Roman Warming was the warmest in the last 2,000 years’ 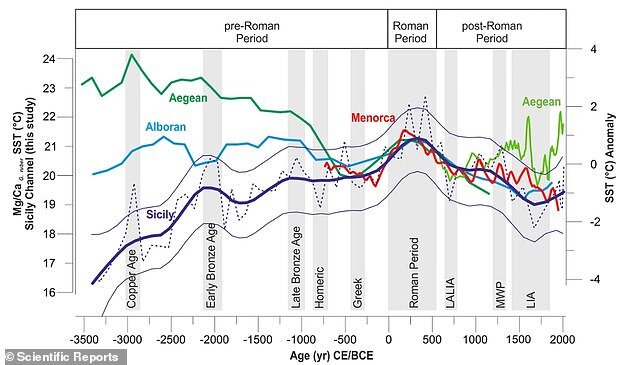 Two recently published studies confirm that the climate thousands of years ago was as warm or warmer than today’s – a fact disputed by some believers in the narrative of largely human-caused global warming. That was an era when CO2 levels were much lower than now, long before industrialization and SUVs.

One study demonstrates that the period known as the Roman Warming was the warmest in the last 2,000 years. The other study provides evidence that it was just as warm up to 6,000 years ago. Both studies reinforce the occurrence of an even warmer period immediately following the end of the last ice age 11,000 years ago, known as the Holocene Thermal Maximum.

The first study, undertaken by a group of Italian and Spanish researchers, reconstructed sea surface temperatures in the Mediterranean Sea over the past 5,300 years. Because temperature measurement using scientific thermometers goes back only to the 18th century, temperatures for earlier periods must be reconstructed from proxy data using indirect sources such as tree rings, ice cores, leaf fossils or boreholes.

This particular study utilized fossilized amoeba skeletons found in seabed sediments. The ratio of magnesium to calcium in the skeletons is a measure of the seawater temperature at the time the sediment was deposited; a timeline can be established by radiocarbon dating. The researchers focused on the central part of the Mediterranean Sea, specifically the Sicily Channel as indicated by the red arrow in the figure below. The samples came from a depth of 475 meters (1,550 feet).

Analysis of the data found that ancient sea surface temperatures in the Sicily Channel ranged from 16.4 degrees Celsius (61.5 degrees Fahrenheit) to 22.7 degrees Celsius (72.9 degrees Fahrenheit) over the period from 3300 BCE to July 2014. This is illustrated in the next figure, in which the dark blue dashed line represents the Sicily Channel raw temperature data and the thick dark blue solid line shows smoothed values. The other lines are Mediterranean temperatures reconstructed by other research groups.

With the exception of the Aegean data, the results all show distinct warming during the Roman period from 0 CE to 500 CE, when temperatures were about 2 degrees Celsius (3.6 degrees Fahrenheit) higher than the average for Sicily and western Mediterranean regions in later centuries, and much higher than present-day Sicilian temperatures. The high temperatures in the Aegean Sea result from its land-locked nature. During the 500 years of the Roman Warming, the Roman Empire flourished and reached its zenith. Subsequent cooling, seen in the figure above, led to the Empire’s collapse prior to the Medieval Warm Period, say the researchers.

The second study was conducted by archaeologists in Norway, who discovered a treasure trove of arrows, arrowheads, clothing and other artifacts, unearthed by receding ice in a mountainous region of the country. Because the artifacts would have been deposited when no ice covered the ground, and are only being exposed now due to global warming, temperatures must have been at least as high as today during the many periods when the artifacts were cast aside.

The oldest arrows and artifacts date from around 4100 BCE, the youngest from approximately 1300 CE, at the end of the Medieval Warm Period. That the artifacts come from several different periods separated by hundreds or thousands of years implies that the ice and snow in the region must have expanded and receded several times over the past 6,000 years.

During the Holocene Thermal Maximum, which occurred from approximately 10,000 to 6,000 years ago and preceded the period of the stunning Norwegian discoveries, global temperatures were higher yet. In upper latitudes, where the most reliable proxies are found, it was an estimated 2-3 degrees Celsius (3.6-5.4 degrees Fahrenheit) warmer than at present. The warmth contributed to the rise of agricultural societies around the globe and the development of human civilization.

Paradoxically though, the Greenland ice sheet – the present melting of which has sparked heated debate – is thought to have been even larger at the peak of the Holocene Thermal Maximum than it is today, when Greenland temperatures are lower. This can be seen in the following figure, showing that the ice sheet extent is currently about the same as it was about 7,500 years (7.5 ka) ago, although it retracted to a minimum in the intervening period, but was greater before that.

Puzzles like this mean that we still have much to learn about the earth’s climate, both past and present, especially in the area of natural variability.