‘A planned economic recession’: Global warming prof. Kevin Anderson – who has ‘cut back on showering’ to save planet – asserts economic ‘de-growth’ is needed to fight climate change

Anderson: 'Continuing with economic growth over the coming two decades is incompatible with meeting our international obligations on climate change' - Put simply, for the wealthier nations, 'the necessary levels of 2°C mitigation and short-to-medium term economic growth are incompatible'

Flashback: Kevin Anderson ‘cuts back on washing and showering’ to fight climate change – Admits at UN climate summit: ‘That is why I smell’ – Defends his call for ‘a planned economic recession’ 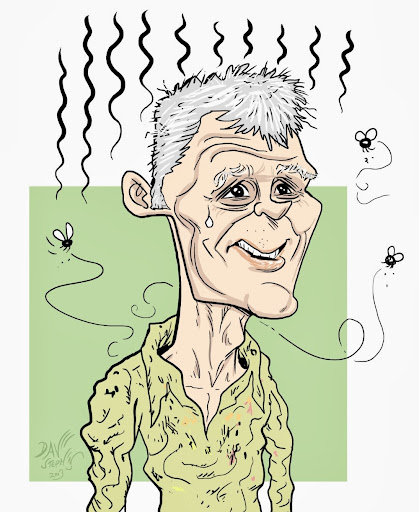 Kevin Anderson, a professor of Energy and Climate Change at the University of Manchester and Deputy Director of the Tyndall Centre for Climate Change Research in the UK, reaffirms his analysis that economic ‘de-growth’ is necessary to fight global warming.  ([email protected])

Don’t shoot the messenger: why disliking a conclusion is not a good basis for disregarding it.

“… for a reasonable probability of avoiding the 2°C characterization of dangerous climate change, the wealthier (Annex 1) nations need, temporarily, to adopt a de-growth strategy.”

Anderson Excerpts: This article summarizes the reasoning behind the contentious conclusion arising from Alice Bows-Larkin and my research – that continuing with economic growth over the coming two decades is incompatible with meeting our international obligations on climate change. The piece was catalysed by a twitter dialogue between Nikolai Astrup (a Norwegian MP), Glen Peters (a researcher at Cicero), Paul Price and me, and followed the Tyndall Centre/Cicero event (slides available from the Tyndall site) at the Warsaw climate change negotiations (COP19, Nov. 2013).

To summaries, if:
1.  reductions in emissions greater than 3-4% p.a. are incompatible with a growing economy,
2.  the 2°C obligation relates to a twenty-first century carbon budget,
3.  a 50% chance of exceeding 2°C is adjudged an acceptable risk of failure,
4.  and Non-Annex 1 nations peak emissions by 2025 & subsequently reduce at ~7% p.a.,
5.  then the wealthier nations’ carbon budget is the global 2°C budget minus the poorer nations’ budget,
6.  and consequently wealthier nations must reduce emissions at 8 to 10% p.a.,
7. Q.E.D. Annex 1 mitigation rates for 2°C are incompatible with economic growth

Update: Warmist Kevin Anderson, who advocates ‘planned recessions’ and cut back on his showering, tells UN climate summit: ‘Nations should give up growth obsession’ – Focus instead on ‘health and food and shelter’  – Anderson: ‘Industrialized countries need a 70% reduction in emissions consumption in 10 years to give us an outside chance of holding temperatures to a 2C rise. They need to cut emissions by 10% annually.’

Flashback: Kevin Anderson ‘cuts back on washing and showering’ to fight climate change – Admits at UN climate summit: ‘That is why I smell’ – Defends his call for ‘a planned economic recession’  – Excerpts:

Anderson responded: “First, it’s not ‘believe’. I concluded. And it’s related to some caveats that went with it.”

Anderson and his colleague Alice Bows wrote in 2008: “Unless economic growth can be reconciled with unprecedented rates of decarbonization (in excess of 6% per year15), it is difficult to envisage anything other than a planned economic recession being compatible with stabilization at or below 650 ppmv CO2e.”

Anderson and Bows explained that global warming was such an urgent problem that it “demands a radical reframing of both the climate change agenda, and the economic characterization of contemporary society.”

Morano concluded the interview with Anderson by stating: “So you don’t shower, you don’t bathe regularly. You believe in planned recessions.”

Warmist Kevin Anderson on his personal efforts to prevent CO2-induced bad weather: ‘I’ve done without a fridge for 12 years, but recently relented…I’ve cut back on washing and showering’ – 2012 – –[email protected]

‘Planned recession’ could avoid catastrophic climate change – A new report from the Tyndall Centre for Climate Change Research said these targets are inadequate to keep global warming below two degrees C above pre-industrial levels. The report says the only way to avoid going beyond the dangerous tipping point is to double the target to 70 per cent by 2020. This would mean reducing the size of the economy through a “planned recession”. Kevin Anderson, director of the research body, said the building of new airports, petrol cars and dirty coal-fired power stations will have to be halted in the UK until new technology provides an alternative to burning fossil fuels.

Flashback 2012: Warmist Kevin Anderson weighs in again: our best and possibly only hope for survival is an economic crash, or at least a planned ‘recession’

Flashback 2011: Warmist Kevin Anderson, dir. of UK’s Tyndall Centre: ‘I think it’s extremely unlikely that we wouldn’t have mass death at 4 degrees’ rise in temps — ‘terrifying’  [Note: Anderson told Climate Depot that he was misquoted about the ‘mass death’ in the 2011 news article and registered a complaint with the newspaper]

Physicist slams Tyndall’s Kevin Anderson for doomsday preaching: ‘I wonder whether those loons actively realize what they are saying’ — Suggests Anderson belongs ‘in a psychiatric asylum’

2009: Ramp up the fear! The Whole World is Laughing at UK Professor Kevin Anderson: Claims global warming will ‘wipe out billions’ — only around half a billion people – will survive!’

Excerpt: In a series of papers published by the Royal Society, physicists and chemists from some of world’s most respected scientific institutions, including Oxford University and the Met Office, agreed that current plans to tackle global warming are not enough.

Unless emissions are reduced dramatically in the next ten years the world is set to see temperatures rise by more than 4C (7.2F) by as early as the 2060s, causing floods, droughts and mass migration.

As the world meets in Cancun, Mexico for the latest round of United Nations talks on climate change, the influential academics called for much tougher measures to cut carbon emissions.

In one paper Professor Kevin Anderson, Director of the Tyndall Centre for Climate Change Research, said the only way to reduce global emissions enough, while allowing the poor nations to continue to grow, is to halt economic growth in the rich world over the next twenty years.