Via Daily Wire: The Post notes that the admission came during an exchange between Saikat Chakrabarti, the chief of staff to Rep. Alexandria Ocasio-Cortez (D-N.Y.) and Sam Ricketts, climate director for Washington Gov. Jay Inslee (D), who is a long shot running for president. The Post reports:

Chakrabarti had an unexpected disclosure. “The interesting thing about the Green New Deal,” he said, “is it wasn’t originally a climate thing at all.” Ricketts greeted this startling notion with an attentive poker face. “Do you guys think of it as a climate thing?” Chakrabarti continued. “Because we really think of it as a how-do-you-change-the-entire-economy thing.”

Update: AOC's chief of staff responds to the reaction to his admission.

Climate Depot Note: This is another in a long line of admissions about the real motives behind climate “solutions.” Climate change is merely the latest env. scare being used to seek the same “solutions” of more central planning. See:

‘Global Warming Solutions Same As Global Cooling Cures’ — Wait . . . What? – 1977 book titled ‘The Coming of the New Ice Age’: The “solutions” prescribed to solve both Global Warming and the looming Ice Age are exactly the same. In both cases, proponents of the theory-du-jour say that in order to stave off disaster, we must reverse the march of civilization, stop our profligate use of carbon-based fuels, cede power and money from the First World to the Third World, and wherever possible revert to a Luddite pre-industrial lifestyle.

EU Commissioner: Global Warming Policy Is Right Even If Science Is Wrong – ‘Regardless of whether or not scientists are wrong on global warming, the European Union is pursuing the correct energy policies even if they lead to higher prices, Europe’s climate commissioner Connie Hedegaard’s has said.’  EU’s Hedegaard in 2013: ‘Let’s say that science, some decades from now, said ‘we were wrong, it was not about climate’, would it not in any case have been good to do many of things you have to do in order to combat climate change?.’

Flashback: 1993: Former U.S. Senator Timothy Wirth: ‘We’ve got to ride the global warming issue. Even if the theory of global warming is wrong, we will be doing the right thing, in terms of economic policy and environmental policy.’

STUDY: Green New Deal Would Have ‘No Effect’ On Climate Change – Even using UN ‘science,’ GND’s temperature impact would be ‘barely distinguishable from zero’

Even EPA Climate Models Show The ‘Green New Deal’ Would Have No Detectable Impact On Global Temps – Even if all the Green New Deal’s goals were achieved, it would have a negligible, and likely immeasurable, impact on projected global warming, according to climate model simulation provided by a libertarian think tank. – “I seriously think the effect would — at best — be barely detectable in the climate record,” Patrick Michaels, a climatologist with the Cato Institute, told The Daily Caller News Foundation. “The year-to-year variation is very close to the total amount of warming that would be ‘saved’ by 2100, according to EPA’s own model,” Michaels said.

And my book is out with new edition that includes 2019 Bonus Chapter on Green New Deal! 'The Politically Incorrect Guide to Climate Change' pic.twitter.com/NO8UdiLDAD

Analysis: ‘Green New Deal has always rested on deception’ – ‘Like a dictator declaring a bogus ‘state of emergency’ to grant him extraordinary powers’

Philip Klein of DC Examiner: The Green New Deal has always rested on deception. Ocasio-Cortez and her backers have argued that we are facing catastrophic emergency and that if we don’t act immediately the looming devastation will be unavoidable. But at the same time, the plan is a wish list of ideas that American socialists would be pushing regardless of the climate issue, and they are in no way necessary to address the global emergency: free college, more union jobs, free healthcare for all, economic security, and “guaranteeing a job with a family-sustaining wage, adequate family and medical leave, paid vacations, and retirement security to all people of the United States.”…

What’s fueled climate change skepticism — or denialism, as liberals would put it — is the belief that liberals are just using it as an excuse to implement their economic agenda. Chakrabarti has provided critics with more ammunition to say, “See, we told you so.”

They finally got us! The #GreenNewDeal is a plan to solve climate change AND reverse wealth inequality by proactively building the new energy economy in America. That means building solar panels, bullet trains, electric cars, batteries, new smart grids, and so much more. https://t.co/9k9i65whWu

Becket Adams of DC Examiner comments:  That is a nice attempt at spin by Chakrabarti, but I am not sure anyone is stupid enough to buy it. The Green New Deal resolution does indeed call for a multitrillion-dollar restructuring of the U.S. economy. It is a wish list of preposterously ambitious initiatives, including one that would upgrade or replace all existing buildings in the U.S. “to achieve maximal energy efficiency, water efficiency, safety, affordability, comfort, and durability, including through electrification.”
But Chakrabarti is lying when he says his team has always been upfront about the proposal being first and foremost a “how-do-you-change-the-entire-economy thing.” From day one, Ocasio-Cortez and the measure’s Democratic Senate sponsor, Sen. Ed Markey of Massachusetts, have sold this stupid resolution as an emergency measure meant to address the world’s most pressing crisis: Climate change. That the Green New Deal also addresses jobs and the economy has been sold to voters as being secondary to the primary issue of saving the environment. So, yes, the resolution has always called for an overhaul of the economy. But, no, they never admitted that this had been the chief focus all along, and that climate change was just an excuse for socialism.

Socialist Rep. Alexandria Ocasio-Cortez’s (D-NY) far-left chief-of-staff, Saikat Chakrabarti, admitted in a recent Washington Post interview that the Green New Deal was not created to protect the environment, but to implement socialism.

The Post notes that the admission came during an exchange between Chakrabarti and Sam Ricketts, climate director for Washington Gov. Jay Inslee (D), who is a long shot running for president. The Post reports:

Chakrabarti had an unexpected disclosure. “The interesting thing about the Green New Deal,” he said, “is it wasn’t originally a climate thing at all.” Ricketts greeted this startling notion with an attentive poker face. “Do you guys think of it as a climate thing?” Chakrabarti continued. “Because we really think of it as a how-do-you-change-the-entire-economy thing.” [emphasis added]

[Sam Ricketts, climate director for Washington Gov. Jay Inslee (D) responded: “Yeah,” said Ricketts. Then he said: “No.” Then he said: “I think it’s, it’s, it’s, it’s dual. It is both rising to the challenge that is existential around climate and it is building an economy that contains more prosperity. More sustainability in that prosperity — and more broadly shared prosperity, equitability and justice throughout.”]

Via Wash Examiner: Chakrabarti further said of Ricketts’ climate plans with Inslee, who has campaigned almost exclusively on environmental issues, “I’ll be honest, my view is I still think you guys aren’t going big enough.” AOC had previously tweeted that “@JayInslee’s climate plan is the most serious + comprehensive one to address our crisis in the 2020 field.”

Conservatives have long warned that Ocasio-Cortez’s $93 trillion “Green New Deal” is a trojan horse that is designed to implement socialism.

Climate change is real and deserves our attention. But not every policy to address it can be taken seriously. Take, for example, the Green New Deal – a sweeping proposal to “save our planet” that reads more like a parody of the progressive agenda. No laughing matter, however, is the proposal’s ultimate objective: to give government unprecedented power over people’s lives and our entire economy. …

…Other aspects of the Green New Deal seem wildly out of place for an environmental resolution. Consider the promise of massive new entitlement programs that could only be achieved through a radical redistribution of wealth. Here, the proposal shows its true colors. This is not some run-of-the-mill progressive policy – it is a Trojan Horse for socialism.

The Green New Deal aims to upend our entire economic system, wresting consumer choice from everyday Americans and putting personal decisions – from the food we eat to the cars we drive – in the hands of an unelected elite. …

A senior Democratic aide told The Washington Post that, in internal conversations, top Democratic officials have said that “they want” Ocasio-Cortez’s chief-of-staff “out.” 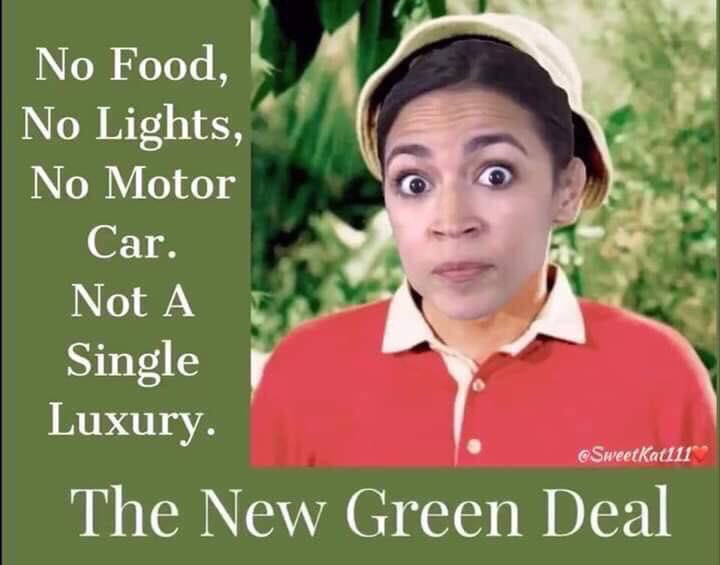