Lovelock rips scientists attempting to predict temperatures as 'idiots': “Anyone who tries to predict more than five to 10 years is a bit of an idiot, because so many things can change unexpectedly.” 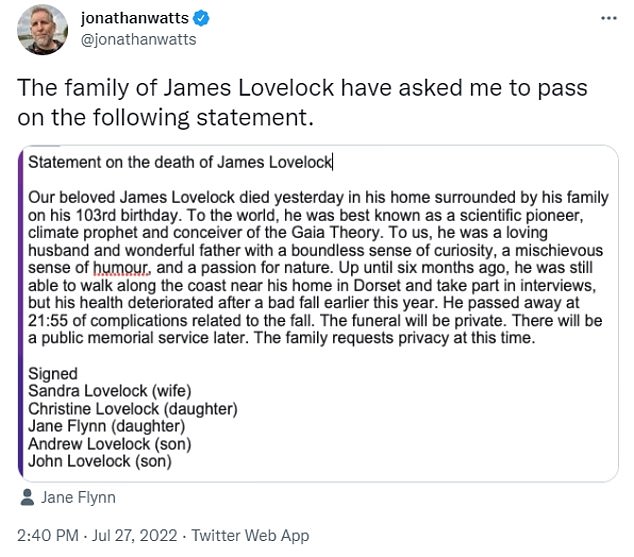 The family said until six months ago Lovelock ‘was still able to walk along the coast near his home in Dorset and take part in interviews, but his health deteriorated after a bad fall earlier this year’

His family said until six months ago Lovelock ‘was still able to walk along the coast near his home in Dorset and take part in interviews, but his health deteriorated after a bad fall earlier this year.’

What is the Gaia hypothesis?

The Gaia hypothesis – first proposed in the 70s – doesn’t claim that the earth is actually ‘alive’ – but that all living organisms and their non-living surroundings are bound together into a ‘system’ that maintains the conditions for life.

It was initially scorned by scientists, but is now being seriously investigated by Earth scientists and scientists in other disciplines – observing how the evolution of life contributed to the stability of temperature and ocean salinity.

It’s also inspired various political and religious movements – with many interpreting the hypothesis as a claim that the Earth actually is alive.

A full statement posted on Twitter reads: ‘Our beloved James Lovelock died yesterday in his home surrounded by his family on his 103rd birthday.

‘To the world, he was best known as a scientific pioneer, climate prophet and conceiver of the Gaia Theory.

‘To us he was a loving husband and wonderful father with a boundless sense of curiosity, a mischievous sense of humour, and a passion for nature.

‘Up until six months ago, he was still able to walk along the coast near his home in Dorset and take part in interviews, but his health deteriorated after a bad fall earlier this year.

‘He passed away at 21:55 of complications related to the fall. The funeral will be private. There will be a public memorial service later. The family requests privacy at this time.’ 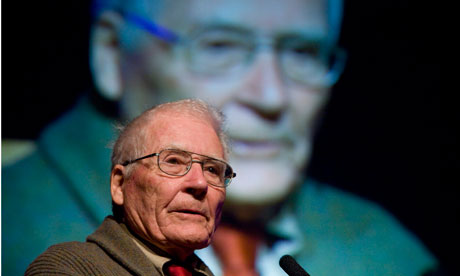 Lovelock rips scientists attempting to predict temperatures as ‘idiots’: “Anyone who tries to predict more than five to 10 years is a bit of an idiot, because so many things can change unexpectedly.”

Lovelock: Fracking is great, the green movement is a religion, his dire predictions about climate change were nonsense – and robots don’t mind the heat, so what does it matter? At 97, the creator of Gaia theory is as mischievous and subversive as ever

What has changed dramatically, however, is his position on climate change. He now says: “Anyone who tries to predict more than five to 10 years is a bit of an idiot, because so many things can change unexpectedly.” But isn’t that exactly what he did last time we met? “I know,” he grins teasingly. “But I’ve grown up a bit since then.”

Lovelock now believes that “CO2 is going up, but nowhere near as fast as they thought it would. The computer models just weren’t reliable. In fact,” he goes on breezily, “I’m not sure the whole thing isn’t crazy, this climate change.”…

Nowadays, Lovelock feels “laid back about climate change”. All things being equal – “and it’s only got to take one sizable volcano to erupt and all the models, everything else, is right off the board” – he expects that before the consequences of global warming can impact on us significantly, something else will have made our world unrecognisable, and threaten the human race.

Lovelock, on BBC TV, slams the global warming claims including those of of the United Nations climate panel. ‘They just guess. And a whole group of them meet together and encourage each other’s guesses.’

Lovelock was once one of the leading voices of climate alarm. See: 2006 Climate Shocker: Lovelock Predicted Global Warming Doom: ‘Billions of us will die; few breeding pairs of people that survive will be in Arctic’

Fast Forward to April 2012: ‘Gaia’ scientist James Lovelock reverses himself: I was ‘alarmist’ about climate change & so was Gore! ‘The problem is we don’t know what the climate is doing. We thought we knew 20 years ago’

Lovelock becomes UN IPCC’s biggest critic: Green Guru Lovelock Slams UN IPCC & Greens: ‘Whenever UN puts its finger in it seems to become a mess’ — ‘The green religion is now taking over from the Christian religion’ — James Lovelock: ”IPCC is too politicized & too internalized’ — On Green religion: ‘I don’t think people have noticed that, but it’s got all the sort of terms that religions use. The greens use guilt. You can’t win people round by saying they are guilty for putting CO2 in the air’

Green Guru James Lovelock slaps down ‘global warming’: ‘Don’t try and save the world, it’s pure hubris’ – ‘Anyone that tries to predict more than 5 to 10 years ahead is a bit of an idiot’

Lovelock: ‘We don’t need to save the planet, it’s looked after itself for four billion years. It’s always been habitable and things have lived on it, so why worry.’

‘That’s one reason global warming hasn’t been so noticeable around here. Far from being an automatic warming up. If the sea starts moving the currents in different directions we get quite cold conditions.’

He added that global warming proponents stated that the earth would get hotter and hotter but “they don’t really know,” and climate models are only based on what data goes into them, so it was hard to say what would happen in the future.

Lovelock: “Environmentalists appall me”
“Fracking is a damn good idea”
“Windmills and Solar Panels …. are just Silly things to do”
“We should have kept to Nuclear”

The Interviewer asks: Do you think we should give up trying to save the Planet?

Interview Question: ‘So what do you think of mainstream environmentalism?’
Lovelock: ‘It appalls me, that’s my view. I think using guilt is a good old hangover of the bad side of Christianity. It is not a good way of solving problems.’
Posted February 13, 20152:52 PM by Marc Morano | Tags: consensus buster, debate, lovelock

James Lovelock concedes: ‘A lot of investment in green technology has been a giant scam, if well intentioned’

Journal question: ‘Will nuclear energy be part of the future, despite the Fukushima nuclear disaster in Japan?’

Lovelock: ‘The business with Fukushima is a joke. Well, it’s not a joke, it is very serious — how could we have been misled by anything like that? Twenty-six thousand people were killed by the magnitude-9 earthquake and tsunami [that caused the nuclear meltdown], and how many are known to have been killed by the nuclear accident? None.

[On the Chernobyl nuclear disaster, Lovelock writes in A Rough Ride to the Future: “The most amazing lies were told, still are told and widely believed… Despite at least three investigations by reputable physicians, there has been no measurable increase in deaths across Eastern Europe.”] A lot of investment in green technology has been a giant scam, if well intentioned.’

Lovelock: “No I don’t [support Extinction Rebellion], I think the silly buggers are going far over the top. It’s all very well to mount a barrier, but make sure when you jump off you don’t crash on the other side!”

Lovelock’s suspicions were confirmed by an Extinction Rebellion activist, Stuart Basden, who has written a piece admitting that XR isn’t about really about climate. “And I’m here to say that XR isn’t about the climate. You see, the climate’s breakdown is a symptom of a toxic system of that has infected the ways we relate to each other as humans and to all life. This was exacerbated when European ‘civilisation’ was spread around the globe through cruelty and violence (especially) over the last 600 years of colonialism, although the roots of the infections go much further back.”

Green guru James Lovelock on climate: ‘Nobody can predict the climate in two or three years’ time. It could be almost anything’

Green guru James Lovelock his evolving views on climate change: “Well, at first you get into a panic. At least I did. And then eventually you realize that there’s not a lot you can do about it.” –

James Lovelock on climate: “There was news of a very large volcano eruption emerging in the middle of the Pacific, from below. Well, of course, if that develops and magma starts coming up, that could change the whole picture.”

Green Guru James Lovelock on voting Brexit, ‘wicked’ renewables and why he changed his mind on climate change

Green Guru James Lovelock reportedly ‘a great admirer of Donald Trump, whom he recognises as a fellow maverick.’