NASA's Jet Propulsion Lab climate scientist Peter Kalmus: "Here's why race justice and climate justice are one & the same: The oppressive extractive plutocracies that colonize and kill black bodies and colonize and kill our planet are one and the same." 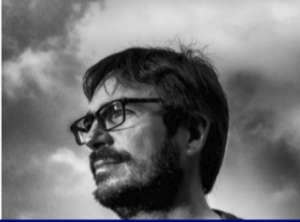 A NASA Jet Propulsion Lab climate scientist has linked race and climate issues during the racial protests sweeping the nation. NASA’s Peter Kalmus wrote on May 30, 2020:

Kalmus ([email protected]) was responding to the protests and riots springing up across the country in the wake of allegations of racism in law enforcement. Kalmus added: “They’d literally rather have a race war than charge even one cop for murdering an innocent black man.” 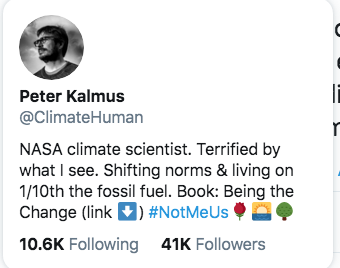 This really isn't about climate, is it? pic.twitter.com/xO2qXNWmKp

Kalmus website describes himself as “a climate scientist at NASA’s Jet Propulsion Lab. I use satellite data and models to study the rapidly changing Earth, focusing on boundary layer clouds and ecological forecasting.”

“My awareness of climate breakdown reached the point where I had no choice but to respond in some meaningful way,” Kalmus writes at his website. “Global warming is happening with a rapidity that leaves me speechless,” he explained. Kalmus’ claims he “uses about 1/10th the fossil fuels of the American average.” Kalmus is a member of the American Meteorological Society and the American Geophysical Union.

In his 2018 article, “Thoughts on Climate Action From a Scientist Who Gave Up Flying,” Kalmus wrote of how “tears poured down” when he thought about the calamity of man-made climate change.

“In order to embrace what’s coming next, I had to let go of what went before. My grief was like the leap of a trapeze artist, letting go of one trapeze, flying through space, and catching the next one. There were times when tears poured down. I mourned the world I’d known my whole life. I mourned my children’s future. I mourned how avoidable this all was. I mourned the strange and hard reality, and I mourned waking up. I mourned every blow struck in anger, and I mourned every bullet fired. I mourned all the species that are leaving us, never to return. I mourned this whole beautiful Earth. But then, through these tears, I accepted reality as it is. Somehow, on the far side of the tears, I found the strength to go forward.”

Flashback 2007: Crying Activist Part 3: NPR: Laurie David on her climate awakening: ‘I remember crying every day at five in the afternoon’

A weatherman breaks down in tears and considers having a vasectomy, vows NEVER to fly again due to grim UN climate report: Eric Holthaus tweeted ‘no children, happy to go extinct’

Flashback 2007: The Crying Dutchman: UN’s Yvo de Boer breaks down into ‘flood of tears’ after warning that failure to reach climate deal could ‘plunge the world into conflict’

2010: Watch: UN’s Christiana Figueres Breaks Down in Tears, Tells Youth That Cancun Will Be ‘Insufficient’ But A Necessary Step

Global warming scaremongering: Children in tears — ‘This is what happens when a mother, who has been brainwashed tells her children about the forthcoming climate armageddon’

Kalmus envisioned a climate-friendly world where “there is no war, no crime, hatred, or negativity.”

“Let’s work to build a world where everyone puts others above self and where we live aligned with the biosphere. In such a world, there is no war, crime, hatred, or negativity,” he wrote.

“A plethora of insights about nature and ourselves, revealed by one man’s journey as he comes to terms with human exploitation of our planet,” Hansen, the former director of NASA’s Goddard Institute for Space Studies, wrote about Kalmus’ book.

Hansen has a history of endorsing extreme climate books.

See: 2010: Time for Meds? NASA scientist James Hansen seems to endorse book which calls for ‘ridding the world of Industrial Civilization’ – Hansen declares author ‘has it right…the system is the problem’ -Book proposes ‘razing cities to the ground, blowing up dams and switching off the greenhouse gas emissions machine’

In fact, Kalmus is following the lead of Hansen, who was arrested multiple times protesting climate change, in making climate science a political issue.

I thought NASA was all about Muslim outreach?

NASA also had a policial controversy in 2010. See: NASA chief says agency’s goal is Muslim outreach, forgets to mention space – NASA chief CharlesBolden: “Perhaps foremost, [President] Obama wanted me to find a way to reach out to the Muslim world and engage much more with dominantly Muslim nations to help them feel good about their historic contribution to science, math and engineering.”

A group of former NASA scientists and engineers has tried to bring NASA back to science.“The Right Climate Stuff,” which includes engineers and scientists from across generations who have taken part in NASA’s most high-profile missions dating back to Apollo. The group has produced its own “rigorous, earth surface temperature model using conservation-of-energy principles” that operates similarly to the way the surface and internal temperature of a spacecraft is analyzed, the Right Climate Stuff team explains on its website.

Former Obama Green Czar and current CNN analyst Van Jones: “Even the most well-intentioned white person has a virus in his or her brain”

Climate Depot Response: The wacky world of warmism strikes again. This is just the latest in a round of racially charged climate conflicts and identity politics within the ‘global warming’ movement. Climate Change activism is increasingly being divided into gender, racial and age categories.

Longtime climate activist David Roberts unleashes on fellow activists: ‘I am sick to f*cking death of hearing white men drone on about climate, myself included’

Sierra Club: The Big Problem With Environmentalism Is ‘Unsustainable Whiteness’

PAPER: ‘Overwhelming Whiteness’ Is Holding Us Back In The Fight Against Global Warming

The Environmental Movement Needs to Reckon with Its Racist History – Because racism in environmentalism hasn’t gone away, and it’s holding the movement back. – By Julian Brave NoiseCat – Indigenous peoples and people of color are disproportionately affected by our global climate crisis. But in the mainstream green movement and in the media, they are often forgotten or excluded. This is Tipping Point, a new VICE series that covers environmental justice stories about and, where possible, written by people in the communities experiencing the stark reality of our changing planet.

Why I Quit Being a Climate Activist – “The climate movement is overwhelmingly white. So I walked away.” – By Karin Louise Hermes – But after a while I realized I would only be called upon when climate organizations needed an inspiring story or a “diverse” voice, contacts for a campaign, or to participate in a workshop for “fun” when everyone else on the (all-white) project was getting paid.  Whenever I would question the whiteness of these spaces and how strategies didn’t take race into account, I would be met with uncomfortable silences. The last time, at a nationwide movement-building workshop last April, I was asked, “Well then, why are you even here?” So I decided not to be there anymore. After four years of helping organize direct actions, speeches, workshops, and countless video calls, I started hiding and declining requests. I was burned out.