Pelosi: Biden-Manchin climate bill will appease ‘angry’ Earth: ‘Mother Earth gets angry from time to time, & this legislation will help us address all of that’ House Speaker Nancy Pelosi on Biden-Manchin climate: “How can they (Republicans) vote against the planet?” Pelosi said. 'Mother Earth gets angry from time to time, & this legislation will help us address all of that'

Climate Depot's Morano Comments: "Has it comes to this, a climate bill in DC will appease 'angry' Mother Earth? Will human sacrifices be next to appease the 'angry' Earth gods? Actually, this bill will create human sacrifice by imposing even more suffering from energy deprivation, supply chain issues, food shortages, inflation, debt, and bad science. Congress is allegedly passing this pork-barrel spending bill in Washington to make the Earth 'happy'? But, the Earth -- 'angry' or not -- will not notice the impact on global CO2 emissions, let alone the climate! Is Pelosi's comment what passes for intelligent climate discourse in Washington DC these days?!" See: Analysis: Biden’s 50% emissions reduction target for 2030 (if achieved) would have a ‘nearly unmeasurable’ impact on overall global CO2 emissions

CRAZY NANCY: "Mother Earth gets angry from time to time, and this legislation will help us address all of that." Does Sacrifice Appease The Sun? ‘This is an age old idea used by Aztecs. It was well known at the time that global warming was ubiquitous and caused by a lack of human blood being spilled’

Today, ‘politicians now take a more subtle approach to human sacrifice. By raising energy prices, they can freeze people to death silently in their homes, which has the same effect of appeasing the CO2 gods’

2006: Catholic Cardinal George Pell: ‘In the past, pagans sacrificed animals and even humans in vain attempts to placate capricious and cruel gods. Today they demand a reduction in Co2 emissions’

But in a speech to US Catholic business leaders, Dr Pell said Western democracy was also suffering a crisis of confidence as evidenced by the decline in fertility rates. “Pagan emptiness” and Western fears of the uncontrollable forces of nature had contributed to “hysteric and extreme claims” about global warming.

“In the past, pagans sacrificed animals and even humans in vain attempts to placate capricious and cruel gods. Today they demand a reduction in carbon dioxide emissions.”

Analysis: Biden’s 50% emissions reduction target for 2030 (if achieved) would have a ‘nearly unmeasurable’ impact on overall global CO2 emissions

“Dr. Roger Pielke ran the numbers and found that, even if it achieved Biden’s 50% emissions-reduction target for 2030, which it almost certainly won’t, the impact on overall global emissions would be nearly unmeasurable.”

Climate Depot’s Morano comments: Biden is pushing for utterly meaningless climate-based emission reductions of CO2 that would have no potential impact on the climate — and even if fully achieved, would have no impact on global emissions! All of this as we further hammer America. Biden should have listened to his climate envoy John Kerry has admitted this publicly several times.

See: Flashback: John Kerry explains climate futility: If U.S. zeroed out CO2 emissions, it ‘still wouldn’t be enough to offset the carbon pollution coming from the rest of the world’ Watch: World Economic Forum touts Biden-Manchin climate/spending bill: ‘New US climate deal could pay people in the US to be more sustainable’

Does that mean Bill Gates & China buy up all of your farmland?! Stop The Manchin Green New Deal: Contrary to Manchin’s rhetoric, the deal contains many of most destructive elements of Green New Deal

And now we know why Sen. Manchin cut a deal on energy bill – ‘Mandate completion of a natural gas pipeline through’ in West VA

AOL News: Senators Manchin, and Schumer report an abrupt deal on health, energy, taxes – “Measure would raise $739 billion over 10 years in revenue, the biggest chunk coming from a 15% corporate minimum tax. It would spend $369 billion on energy and climate initiatives.”

NYT: “The plan would raise most of its new tax revenue, an estimated $313 billion, by imposing a minimum tax on the so-called book income of large corporations, like Amazon and FedEx, that currently use tax credits and other maneuvers to reduce their tax rates below the 21 percent corporate income tax rate in the United States.”

Climate Depot’s Marc Morano: “Manchin caved to utter climate nitwittery that has real consequences for the U.S. economy currently being starved of energy by a wacko ideology that is dominant within the Democratic Party. This is a bad day on Capitol Hill for America. More spending, more debt, more nonsensical scientific claims about how a pork barrel federal spending bill will somehow alter the geologic history of the Earth. Sen. Manchin held strong against the climate agenda — until he didn’t. Does Manchin’s support for this climate bill mean the Earth will not have a geologic era called the Manchin-cene?!” See: Flashback Morano: ‘We’ve reached peak climate insanity’ as Sen. Manchin kills Biden’s bill – ‘Completely unhinged’ activists claim a pork barrel fed spending bill will alter Earth’s geologic history! Morano: Sen. Chuck Schumer is ‘shell-shocked’. The House Budget Committee Chairman said ‘we’re all going to die’. We have a climate activist Bill McKibben actually saying that Joe Manchin’s name is going to be a geologic era in the Earth —  that Manchin is altering the geologic history of the earth. They are completely unhinged because one politician is not going to support a pork barrel spending bill, which they somehow think is going to save the planet. Just another pork barrel spending bill in Washington somehow has this power. We’ve reached peak climate insanity.” 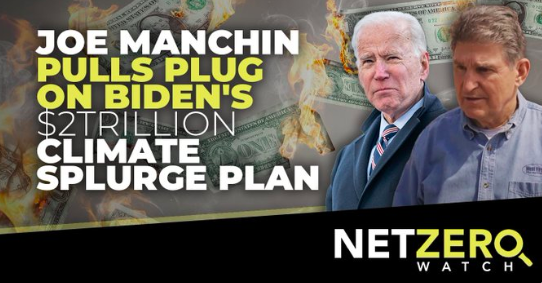 NYT: Leah Stokes, a professor of environmental policy at the University of California Santa Barbara who has advised congressional Democrats on climate legislation, sobbed on Thursday night as she described the months of work she and other activists, scientists and legislative staff had poured into negotiations. “The stakes are so high,” she said. “It’s just infuriating that he is condemning our own children.”

Thank you, Sen. Manchin! Manchin: “I cannot vote to continue with this piece of legislation…This is a no,” Manchin said.

And apparently – only American fossil fuels etc can be pollutants.
Once we sell our Strategic Reserve oil to China – it becomes – magically- carbon neutral.
And the hundreds of coal fired power plants China and India are building are "Clean energy"

Ah yes Nature worship. We've regressed right back to the dawn of man. Ironically Pelosi may well be the only person who was there the last time around.

While sane people laugh at this, it is the perfect formulation for people who have adopted climate alarmism, with all its symbols, rituals, and arcane dogma, as their state religion. https://t.co/YDX5I6ZgdT