Manchin: "I cannot vote to continue with this piece of legislation...This is a no," Manchin said. It’s all over for Joe Biden’s climate agenda 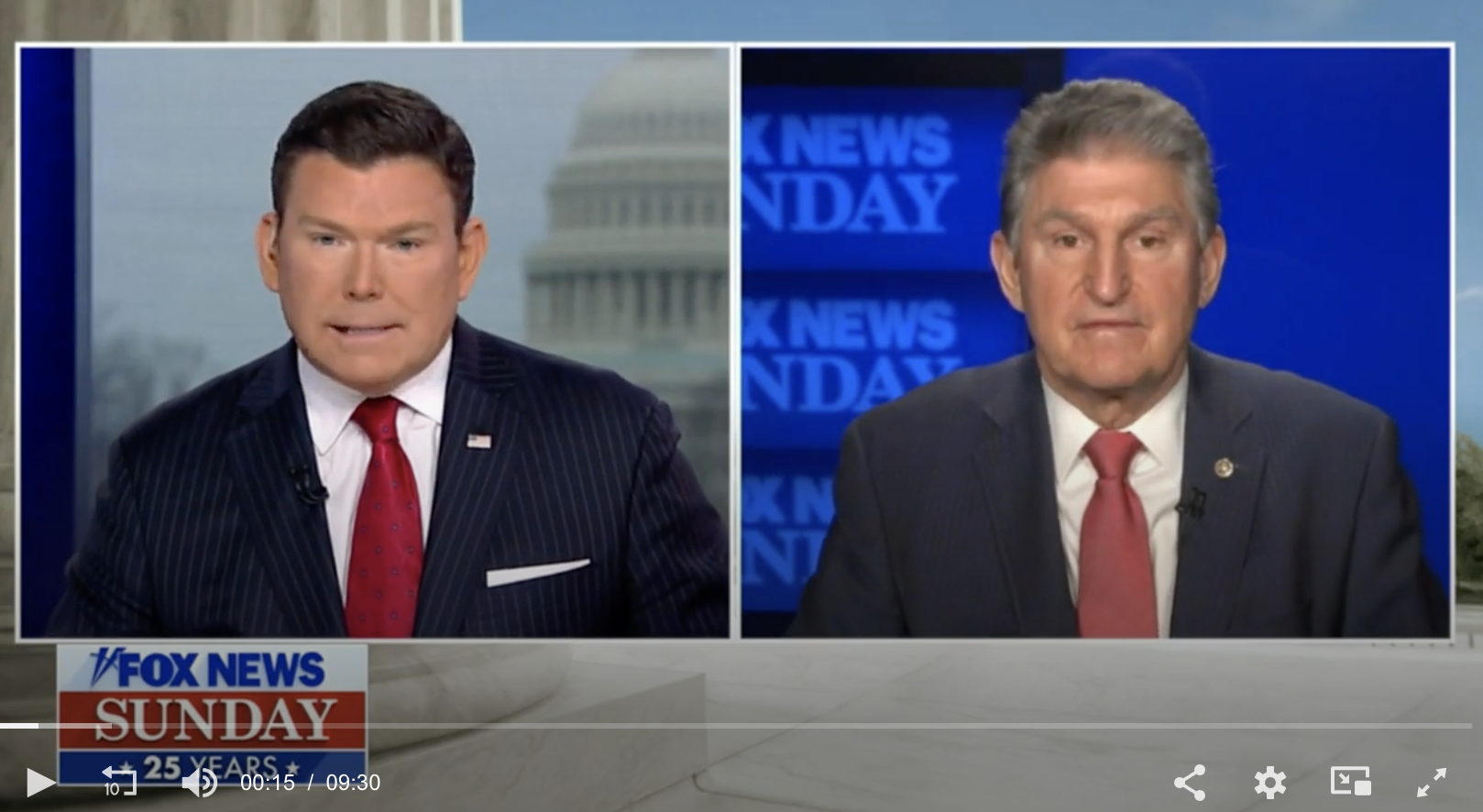 It’s all over: Manchin says he ‘cannot vote’ for Build Back Better

‘I cannot vote to continue with this piece of legislation,’ he said

Sen. Joe Manchin, D-W.Va., declared Sunday that after months of negotiations he has determined that there is no way he can support the massive social spending bill known as the Build Back Better Act. Speaking with “Fox News Sunday,” Manchin said that he has spoken with President Biden, House Speaker Nancy Pelosi, and Senate Majority Leader Chuck Schumer, D-N.Y., “I’ve done everything humanly possible,” Manchin said, talking about how hard he has worked to try to reach an acceptable compromise on the bill.

In the end, however, he said that between ongoing inflation, the national debt, “geopolitical unrest,” and the COVID-19 pandemic, the bill being pushed by his fellow Democrats was too much.  “When you have these things coming at you the way they are right now … I cannot vote to continue with this piece of legislation,” he said, stating that if he cannot explain to his constituents why he would vote for a bill, then he cannot vote for it, despite all the work he and other Democrats have put into trying to make it work. “This is a no,” he said. “I have tried everything I know to do.”

Squad slams Sen Joe Manchin for killing Biden’s progressive Build Back Better plan: AOC rages that ‘our entire democracy is on the line’

The conservative Democrat appeared on Fox News on Sunday and struck the death knell to the ambitious and massive social spending policy that was the president’s top priority.

Sen. Joe Manchin (D-WV) finally put the nail in the coffin of the Biden administration’s ambitious Build Back Better social spending package, declaring on Sunday that he was a “no” on the legislation and “can’t vote for it.” 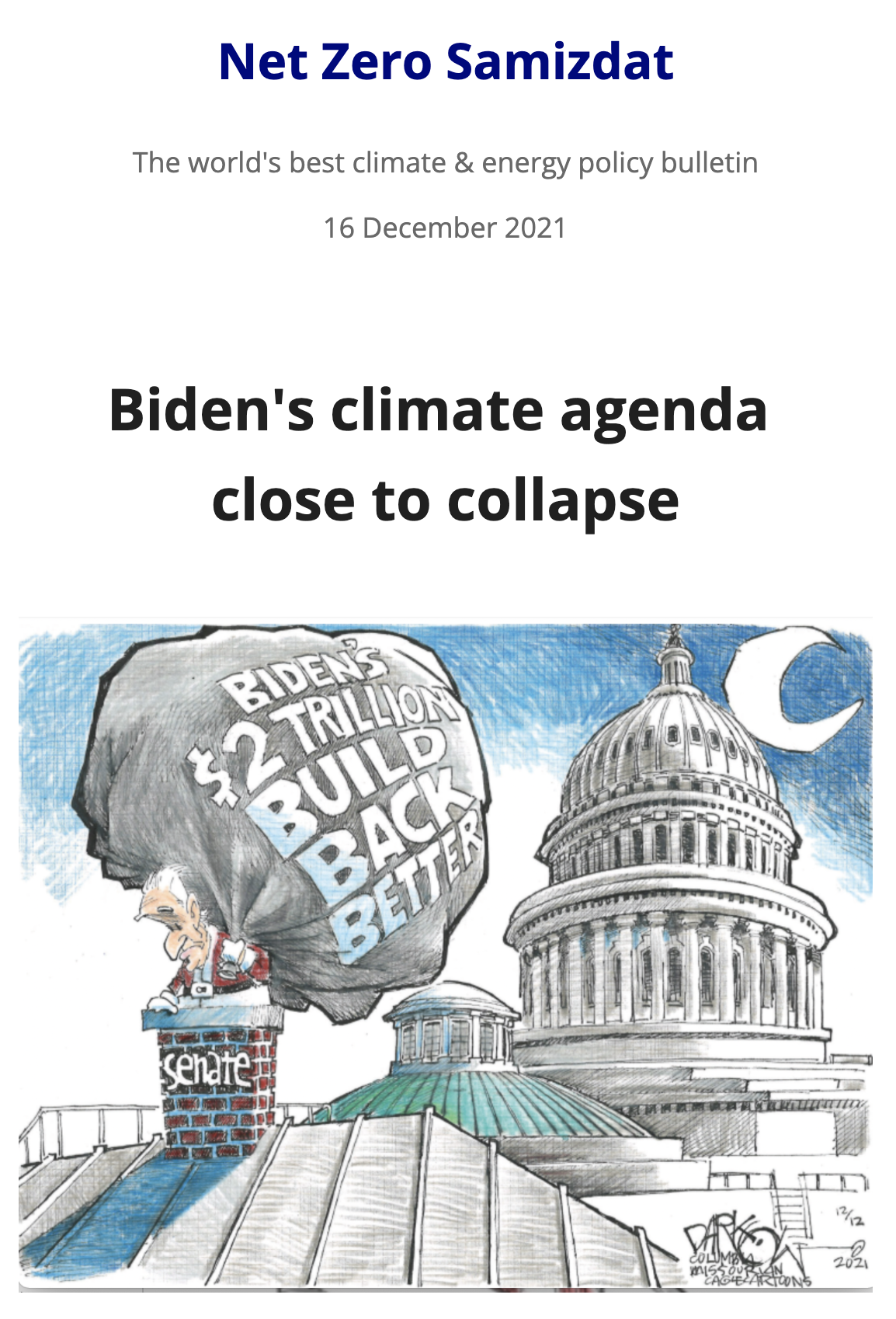 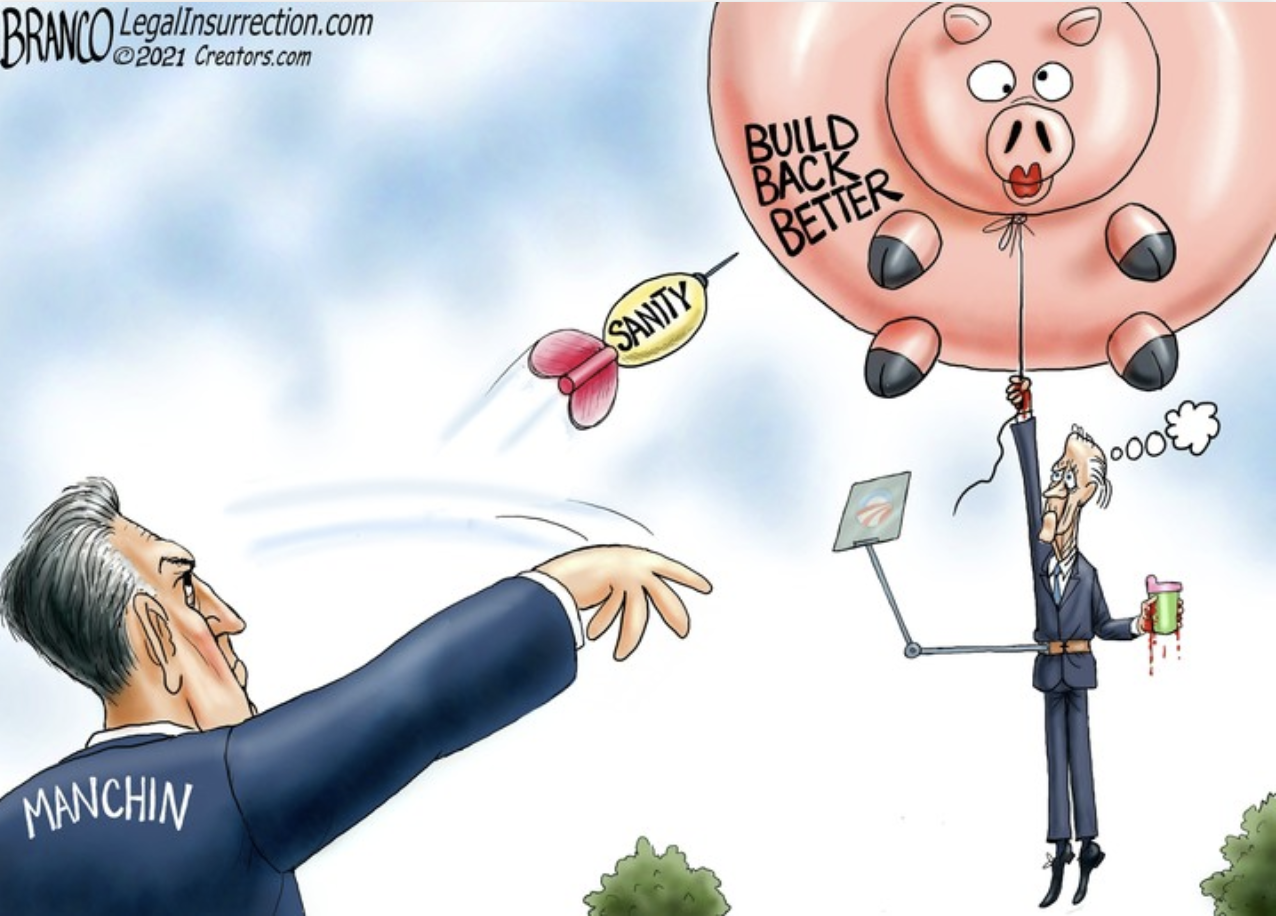 Kudos to Sen Manchin for opposing Build Back BANKRUPT! As this video clip shows, the progressives put all the pressure on him that they could. https://t.co/yYjb0MH4qX

Michael Mann on MSNBC: “Well, you know, we need to pass Build Back Better, because that –that bill has climate provisions that will address this problem at its, you know, at its core, which is the warming of the planet due to carbon pollution, fossil fuel burning, so that’s most important. We can prevent this from getting worse if we act on climate.” …

Mann: “It’s really both. It’s adapting to the changes that we are already forced to deal with and preventing it most importantly, from getting worse by acting on climate.”

Marc Morano comment: “Pass a pork-barrel spending bill to improve the weather!? Mann must be utilizing every ounce of his Ph.D. to have come up with climate ‘solution.'”  See:‘BONKERS!’ Watch Morano Minute: ‘The Jurassic, Holocene, and now….Manchin-cene??!’ Climate activists say Sen. Manchin’s opposition to Biden’s pork-barrel spending will alter Earth’s geologic record!

Climate activists are claiming that Senator Joe Manchin’s opposition to Biden’s pork-climate spending bill, aka “Build Back Better,” will be so harmful we will see the impact of it on the geologic record.

The Jurassic, Holocene, and now….Manchin-cene??

.@GoldmanSachs unhappy over the death of Wall Street's prospects for climate and inflation profiteering from BBB.

Manchin said he does not agree that the federal government’s role should be supporting private-sector EV infrastructure buildouts.

JEFF GOODELL of Rolling Stone: “West Virginia Sen. Joe Manchin just cooked the planet. I don’t mean that in a metaphorical sense. I mean that literally. Unless Manchin changes his negotiating position dramatically in the near future, he will be remembered as the man who, when the moment of decision came, chose to condemn virtually every living creature on Earth to a hellish future of suffering, hardship, and death.”

Sen Schumer goes full witchcraft: ‘If We Would Do More on Climate Change, We’d Have Fewer of These Hurricanes’– Schumer claims: Human Beings Could Reduce Frequency of Hurricanes

New York Senator Chuck Schumer: “If we would do more on climate change, we’d have fewer of these hurricanes and other types of storms. Everyone knows that, except a few.” – Schumer said the Trump administration has done nothing but “move the issue backward.”