New Study: ‘Methane emissions have a negligible impact’ on climate

The greenhouse effect makes this planet more hospitable. Greenhouse gas molecules in the atmosphere keep the planet warmer than it would otherwise be by re-radiating some of the energy back toward the earth – in a process called back radiation. Water vapor is by far the most important greenhouse gas. Much of the discussion of the greenhouse effect has been rooted in an incorrect picture of the atmosphere: nearly all climate models begin by assuming “dry air” as the gas. As shown in Figure 1, that assumption yields this picture of the atmosphere: 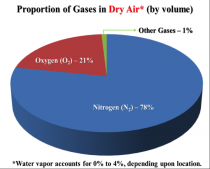 Mentioning H2O (Water vapor) in an asterisk is definitely not the right way to go about it. Dry air does not exist in nature, but must be created in the laboratory with specialized equipment. Therefore, the above picture seriously misrepresents the reality of air and the reality of the greenhouse effect. In reality, the greenhouse gases (GHGs) comprise a small finite fraction of the atmosphere, and H2O is by far the most important of them. In the pie-chart shown in Figure 2 below, we illustrate better how the greenhouse effect is “divvied up” in the real world, unlike the imaginary world of dry air.

Figure 2: Breakdown of the “natural” greenhouse effect by contributing gas. IPCC ReportAR-1. 1992. (Because halocarbons are industrial gases they are not represented here).

However, to draw even this graph, it was necessary to choose some specific amount of water vapor in a representative atmospheric model. That’s not a very reliable way to guess (given the forecast reliability of climate models), but it’s far better than guessing zero, which is the case with “dry air.” In Figure 2, 28% of the greenhouse effect is attributed to “other gases” which are almost entirely CO2. That percentage is very likely way too high. The magnitude of CO2’s influence is now being challenged worldwide 1 , 2 . However, the point we wish to make herein is about methane (CH 4 ) and its actual greenhouse impact, not that of CO 2 .

In the U.S., regulation of methane emissions from numerous sources is currently being debated. Currently, this debate is not at all about the scientific basis for regulation, but rather totally about the costs involved with regulating various sources. However, contrary to the common assertions, the GHG temperature impact of methane is negligible 3 . Thus, water vapor and clouds are primarily responsible for the greenhouse gas (GHG) effect. Climate modelers have tried to model this highly complex thermodynamic process by starting with dry air and then introducing H2O as a “feedback” effect. That clearly doesn’t work as shown below.

There is a huge difference between methane as a confined gas inside laboratory equipment and methane as it is found in normal air. In the real world of real air, the very few possible absorption-lines of CH4 are utterly swamped by the prominent absorption-lines of H 2 O at the very same wavelengths. Any photon that might be captured by CH 4 has long since been captured by H 2 O. Add to that the fact that there is very little energy in the CH 4 region of the infrared spectrum (7.65 microns), because the radiation emanating from earth is centered around 15 microns and spread from about 9 microns to 30 microns. Also, add to that the fact that CH 4 concentration is about 1.8 parts per million, while H2O is about 15,000 parts per million. As it turns out, H2O’s impacts, including its phase-change-related impacts, overwhelm everything else in the entire “greenhouse” game.

The entire furor over methane (and the “cow farts” which are good for some giggles) is simply a result of imagining an atmosphere having an idealized chemical-laboratory setting instead of thinking of the earth’s actual atmosphere, made up of real air, which contains H20 – lots of it, not to mention the enormous oceans always ready to evaporate more H2O upon warming.

The mechanism by which methane goes away is this: being far lighter than air (atomic weight 16), CH 4 drifts from the surface (where its origin is termites, wetlands, rice paddies and a little from human and animal activities, etc.) up through the troposphere into the stratosphere. There it is soon oxidized to H2O and CO2 . That happens in the daytime, aided by solar photons. (CH4 and O2 molecules don’t just automatically combine when nearby, and infrared photons are too weak to energize the reaction.) The amount of H2O in the stratosphere is about 4 or 5 ppm. Why not zero? H2O was supposed to have all frozen out and turned into clouds in the upper troposphere, was it not? It seems very likely that virtually all the H 2 O molecules in the stratosphere are what is produced via the oxidation of CH4. But these H2O molecules are of such low density that the H2O-to-H2O collisions (required to begin a snowflake) would occur very infrequently. People guess that the lifetime of CH4 in the atmosphere might be around 5 years. That’s a guess because it hasn’t been measured well. The many different emission sources of CH4 are ‘ubiquitous”, i.e. “all over the place” and there’s no current way to track atmospheric CH4 concentration. Moreover, there is more being originated every day. But, once again, since CH4 is lighter than air, it gradually heads for the stratosphere anyway where the above mentioned chemical reaction dispenses with it!  Hence the hand-waving guess of 5 years still stands. But, nobody cares, because CH4 goes away on its own with negligible impact on the Earth’s temperature. There is no place akin to Mauna Loa where CH4 atmospheric concentration has been measured over a large fraction of the past century; thus, unlike for CO2 , any claim that a century ago CH4 concentration was half its value
today is specious.

Rather the entire fear of CH4 is based entirely on the IPCC “Global Warming Potential” number being a “factor of 28 stronger” than CO2. But that concept is rooted in thinking about “dry air” in the laboratory, not about “real air” in nature.

Water vapor and clouds totally dominate the greenhouse gas impact on the Earth’s temperature. Methane emissions have a negligible impact and there is no need whatsoever for their regulation. In fact, the cost/benefit ratio associated with any attempt at regulation to reduce methane emissions would be infinite, since the “global cooling benefit” would be zero – not to mention the costs being huge!

New research finds methane virtually irrelevant as a greenhouse gas  – Physicist Dr. Tom Sheahen: “Worrying about methane emissions is the greatest waste of time in the entire lexicon of global warming fanaticism. Converting methane to CO2 is done by the process of “flaring” — setting fire to the stack gas coming off from an oil well, as is done daily throughout the middle east, where the oil is valued but the CH4 is not…The number ‘Global Warming Potential’ is completely false, a nonsense calculation thought up by the IPCC to drum up more concern beyond just CO2.”

Another climate scare fades away: Warmist Michael Mann criticizes fellow activists for promoting the ‘pseudo-science’ of the Arctic ‘methane bomb’