“We are witnessing catastrophic ecosystem collapse of the largest living organism on the planet.”

“I am in the confronting position of being one of the few Australians who sees the terrifying reality of the climate crisis.”

Remember when scientists were dispassionate, cautious people? Well, forget that. 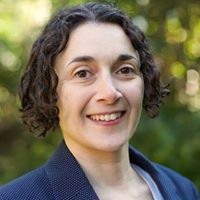 Joelle Gergis unleashes a message of full gut-wrenching, stomach sinking, terrible truth and brutality. Lordy, 50 per cent of the Great Barrier Reef is dead. Sometimes she cries after her talks. She has a vision, a precognition of awful events, but only she and a few other UN certified seers can see. Climate change is the terrifying eco-disaster that sounds more and more like a Stephen King novel. How does a scientist sell climate change — with pools of blood. It’s like a brain haemorrhage. Seriously.

Her grief is rapidly being superseded by rage. “Volcanically explosive rage”.

What are the odds that a scientist like this would consider her results impartially — would be willing to toss out her pet ideas if 28 million radiosondes, 3,000 ocean buoys, 120 proxies, 1,000 tide gauges and 40 years of satellite data were all wrong, and all wrong in the same direction? This is the same woman who whipped up a storm of headlines about how Australia was warmer now than 800 years ago based on a 0.09C warming so small it’s less than the error bars and only “measured” with two stands of trees in Tasmania and New Zealand.

Is she hunting for the truth or looking for fame, status and a captive audience? Once upon a time scientists used to talk in caveats and careful qualifiers. Not any more.

And the irony — after all this hyperbolic unleashed emotion, she twists the knife to call for… wait...”an urgent and pragmatic national conversation.” Where’s the pragmatism in doing science as an unrelated horror movie analogy.

“We are witnessing catastrophic ecosystem collapse of the largest living organism on the planet.”

Being willing to acknowledge the arrival of the point of no return is an act of bravery.

Holy Horrors: This woman is so special — Look at me, so brave, so visionary!

She’s a messiah in the making. Joelle Gergis is one of the chosen ones:

As one of the dozen or so Australian lead authors on the United Nations Intergovernmental Panel on Climate Change’s (IPCC) sixth assessment report, currently underway, I have a deep appreciation of the speed and severity of climate change unfolding across the planet. Last year I was also appointed as one of the scientific advisers to the Climate Council, Australia’s leading independent body providing expert advice to the public on climate science and policy. In short, I am in the confronting position of being one of the few Australians who sees the terrifying reality of the climate crisis.

She’s so smart almost no one else sees what she sees.

Because climate change is like a brain hemorrhage. Explain to me how this has any scientific link at all — it’s mere theatre — the two topics connected by personal “shock”. She’s shamelessly milking family grief for propaganda mileage.

The last time this happened to me, [finding there was “no where to hide”] I was visiting my father in hospital following emergency surgery for a massive brain haemorrhage. As he lay unconscious in intensive care, I examined his CT scan with one of the attending surgeons who gently explained that the dark patch covering nearly a quarter of the image of his brain was a pool of blood. Although they had done their best to drain the area and stem the bleeding, the catastrophic nature of the damage was undeniable. The brutality of the evidence was clear – the full weight of it sent my stomach into freefall.

Which part is emotionally frozen?

Increasingly after my speaking events, I catch myself unexpectedly weeping in my hotel room or on flights home. Every now and then, the reality of what the science is saying manages to thaw theemotionally frozen part of myself I need to maintain to do my job. In those moments, what surfaces is pure grief. It’s the only feeling that comes close to the pain I felt processing the severity of my dad’s brain injury. Being willing to acknowledge the arrival of the point of no return is an act of bravery.

Sure. Blood n’ guts one minute, analytical the next:

As a climate scientist at this fraught point in our history, the most helpful thing I can offer is the same professionalism that the doctor displayed late that night in Dad’s intensive-care ward. A clear-eyed and compassionate look at the facts.

Dear Joelle, any time you want to start the clear eyed commentary, go right ahead.