Watch: Morano on Fox on UN Climate Fund & Reparations: ‘UN climate fund will subsidize governments that are best at keeping people poor. That is obscene’ 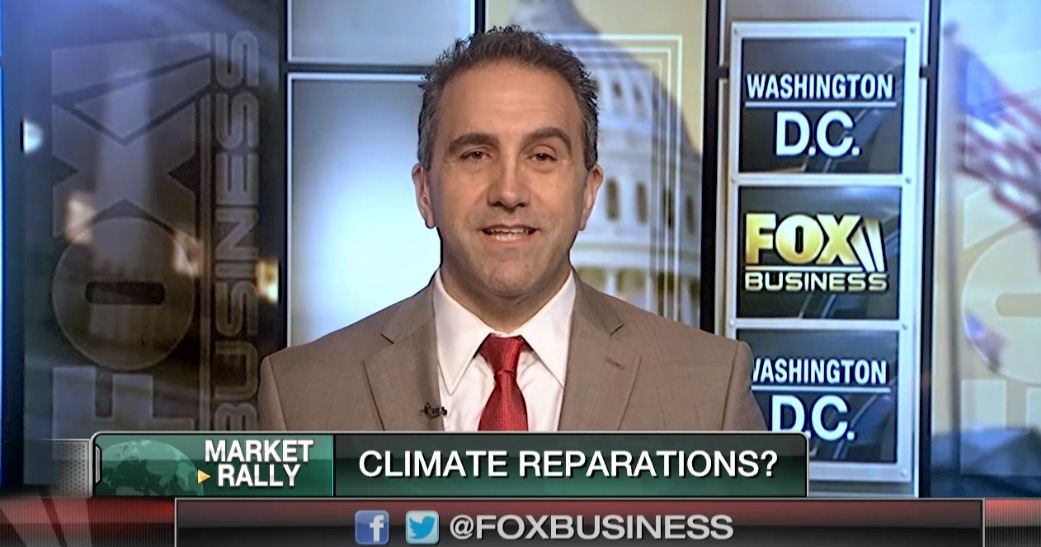 Morano: 'This UN climate fund is committing us to essentially helping poor countries stay poor. We are going to subsidize governments that are best at keeping people poor. That is obscene. And we are going to slow down their fossil fuel development. They will not be able to emulate the wealthy Western nations. They are going to have to stay poor in order to fight ‘global warming.’

Morano: ‘The money is going to countries that are best at keeping people in poverty. Because, obscenely, this will attempt to keep countries like Brazil and India from developing to their potential.

So countries, instead of giving vaccines, humanitarian aid, are going to reclassify that aid to meet the climate fund obligations. And a lot of development experts think the poor countries will suffer even more.’

Stuart Varney asks this Climate Fund is a done deal:

Morano: ‘It can be stopped by the next President. Both our entire domestic and international climate policy will depend on the next president’s direction…

This UN climate fund is committing us to essentially helping poor countries stay poor. We are going to subsidize governments that are best at keeping people poor. That is obscene. And we are going to slow down their fossil fuel development. They will not be able to emulate the wealthy Western nations. They are going to have to stay poor in order to fight ‘global warming.’

‘China is laughing at us. They are building coal plants every several weeks and going to full industrialization.

They love these climate policies in the West because we are tying our own economies back while China can continue unfettered.

There is a movement out now calling for ‘planned recessions’ in order to fight global warming. The UN IPCC wants to redistribute wealth by climate policy’

Cass Sunstein: Climate ‘Reparations’ for Poor Nations? Not So Fast: As part of any agreement, poor nations, such as Brazil and India, want wealthier countries to pay them a lot of money, both for scaling back their emissions and for adapting to a warming climate…Their argument has traction. Wealthy nations have agreed, in principle, to provide $100 billion by 2020 to the United Nations’ Green Climate Fund. Last year, President Barack Obama pledged to give $3 billion. — and in Paris, poor nations seem poised to demand far more, perhaps even trillions.

And if the real goal is to help poor nations, the argument for specific funds to combat climate change seems weaker than the argument for a general cash grant, which poor countries could use however they like (for example, to combat malaria). …The corrective justice argument also conflates current generations with past generations. Much of the current “stock” of greenhouse gas emissions was produced by the actions of people who are now dead. The median American was born in 1979. How, exactly, does he or she owe reparations to people now suffering from warmer climates in India, Vietnam or Bangladesh? There is a subtler problem. Through industrial activity, trade, and technology, rich countries have conferred big benefits on poor ones, not least in the form of improved health and opportunity. Consider the recent response to the Ebola crisis, life-saving medical innovations or the dissemination of cell phones throughout the world.  A full accounting might require poor countries to pay the rich ones back for those benefits.

NYT: Getting to $100 Billion in Climate Change Aid – Six years ago in Copenhagen, Hillary Clinton, then secretary of state, brought the moribund negotiations on a deal to slow climate change back from the dead with a single promise of $100 billion a year to help the world’s poor nations. The world’s advanced industrial nations committed to “mobilizing jointly $100 billion a year by 2020, to address the needs of developing countries.” The money was to come from “a wide variety of sources, public and private, bilateral and multilateral, including alternative sources of finance.”

But where’s the money?…Once a leader in the effort to muster money to help the world’s poor tackle climate change, the United States these days plays a more modest role. Facing complicated budgetary politics, Washington is having a hard time putting its money where its mouth was six years ago.

To be sure, the world has made progress. This week, France promised $5.6 billion in annual climate-related assistance by 2020, up from some $3.4 billion today. Britain also pledged to increase its budget for climate-related development finance. “We are well on our way to achieving this $100 billion goal,” Secretary of State John Kerry said after a meeting of rich countries in Paris this month to discuss climate finance.

Still, there’s a long way to go. “We are at $50 billion for sure,” said one knowledgeable European diplomat, who spoke on the condition of anonymity because he was not authorized to discuss the negotiations. “But something like $30- to $40 billion in new money will have to be mobilized between now and 2020.”…Poor nations urgently need financial resources to steel themselves against volatile, unpredictable weather. Foreign capital, however, is more interested in pursuing potentially lucrative renewable energy deals…

The Obama administration argues it is hardly dragging its feet. “The U.S. has contributed substantial climate finance to poor countries in recent years, including $12.8 billion from 2010 to 2014,” a United States government official said.

“While there is a lot of overlap between the climate and development, it is not the same thing,” said Rajiv Shah, who headed the United States Agency for International Development until earlier this year. “If we start cutting vaccines for poor countries to meet climate obligations, we will be doing a disservice to the world.”

Reaching $100 billion is essential more for its diplomatic significance than for its actual impact on climate change. Consider it a down payment intended to encourage countries to redouble efforts to cut carbon emissions and deal with increasingly bad weather in future years. The most important change requires redirecting trillions of dollars now flowing.

Flashback 2002: South African Activist Leon Louw: Poor countries should just say: ‘Go to hell’ to Wealthy Western Nations: ‘If you don’t want us to fill in our wetlands, then you bomb your big cities like Washington, a third of Holland and Rotterdam and so on, and restore them to being swamps’

Climate Depot warns of ‘a new form of colonialism’: ‘Western world is telling 1.6 billion people in developing world that they have to have their economies managed’

Ugandan Activist: ‘African life span is lower than it was in U.S. and Europe 100 years ago. But Africans told we shouldn’t develop’ because wealthy Western nations are ‘worried about global warming’: Excerpt: ‘Telling Africans they can’t have electricity and economic development – is immoral’

Flashback 2002: UN Earth Summit’s Failure Called ‘Good Thing’ For Poor Nations: Excerpt: The first world became rich without the IMFs and World Banks, and the less of them that are around, the more likely the Third World is to do the same.”

India: ‘It is morally wrong for us to reduce emissions when 40% of Indians do not have access to electricity’

Greenpeace Leader: There is urgent need for the suppression of economic growth in U.S…’Lifestyle of the rich in the world is not a sustainable model’ – August 20, 2009

Flashback 2002: Average American Lifestyle Called “Total Bull—t” by Environmentalist – Excerpt: ‘If anyone in a developing country looks to the U.S. and wants a lifestyle like the average American–it’s total bull—t!’

Former EU Environment Minister Margot Wallstrom: ‘Kyoto is about the economy, about leveling the playing field for big businesses worldwide’

Obama Advisor Warren Buffett ‘repeats criticism of cap and trade, saying it would be a huge, regressive tax’

Greens War on Modern Civilization: ‘Diaperless Babies’ More Earth Friendly? – ‘Reusable toilet wipes’ – ‘Save the Trees, Use More Wood!‘ — A Climate Depot FactSheet on the Demonization of Toilets and Toilet Paper and Diapers – Read all about the ‘easily flushable science’

Wash. Post’s Moment of Clarity: In Poorer Nations, Energy Needs Trump Climate Issues – September 9, 2009 – Excerpt: Millions of people are eager to buy their first washing machines, refrigerators and air conditioners…dearth of power hinders prosperity. […] Some environmentalists see a chance for Asian and African countries to take the lead in developing renewable energy technologies such as solar and wind power, bypassing Western energy models based largely on coal and oil. But many economic experts here are doubtful that will happen. “The United States and Europe have had the energy they needed to grow and develop,” said William Bissell, a prominent Indian entrepreneur and author of “Making India Work.” “But we haven’t had our 21st century yet.”