Panel member: 'A socialist world that will deliver a high standard of living for all.'

Bill McKibben: Climate change 'is the biggest problem that humans have ever been up against'

Naomi Klein: 'We are dealing with an existential terror'

Sen. Bernie Sanders: 'We all know what Fox TV does not know. Climate change is real.' 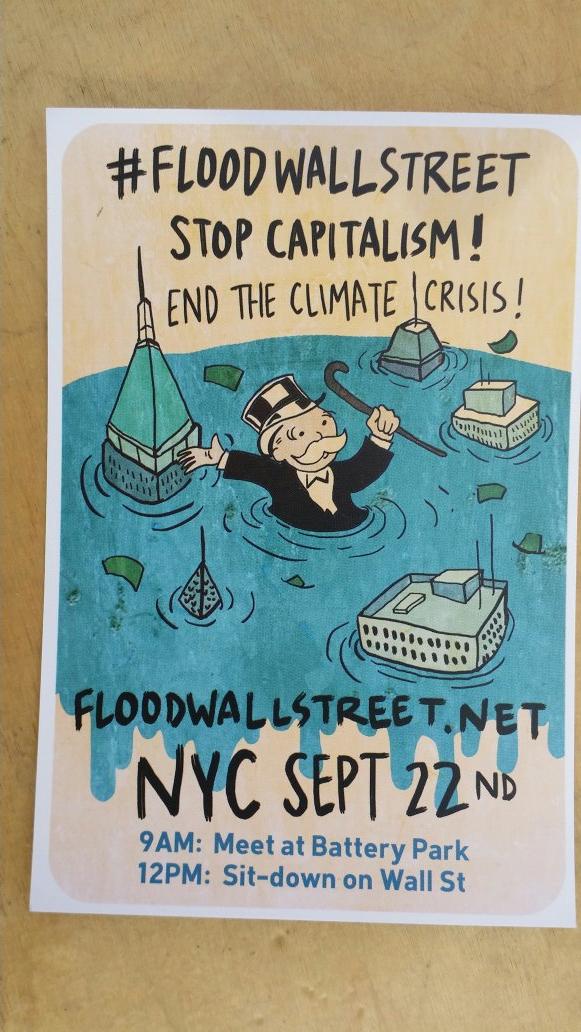 [ ALERT: Obama’s Own Scientist Runs Cold on Warming – Outs Himself as a Skeptic!

Hulk Actor: Questioning Gore & DiCaprio’s carbon footprint ‘defies the spirit’ of the climate march – ‘That is a question you shouldn’t be asking here today’ – Actor Mark Ruffalo – Don’t make me angry: ‘Anyone who attacks Leonardo DiCaprio is either a coward or an ideologue’]

The event, held at the Unitarian Church of All Souls, was titled “THE CLIMATE CRISIS: WHICH WAY OUT.” The event was permeated with socialist literature with the Socialist Alternative newspaper prominently on display. 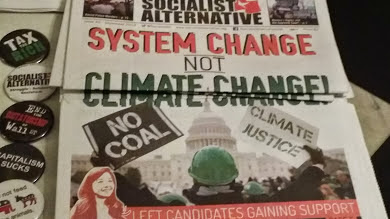 Literature prevalent at the event.

When Kshama Sawant, a socialist who won a seat on the Seattle City Council, noted she was the first socialist elected in decades, the church erupted in applause.

“A socialist world that will deliver a high standard of living for all,” Sawant said to applause.

Sawant ripped the current economic system: “The market is God, everything is being sacrificed on the altar of profits,” Sawant declared.  “We must bring giant corporations into public ownership. You cannot control what you don’t own,” she added.

Senator Bernie Sanders ripped Fox News Channel: “We all know what Fox TV does not know. Climate change is real,” he said to laughter. Sanders declared the “debate is over.” “This is the planetary crisis of our time.”

“Unless we address global warming this planet will be even more unstable than it is today.” [Sanders also faced a momentary protest from the crowd for his supporting “war.” Activists unfurled a big banner in front of Sanders while he spoke.] 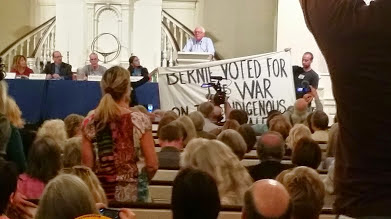 Climate marchers find Sen. Sanders too far to the right?!

350.org founder and march organizer McKibben called global warming the ‘greatest crisis.’ “This is the biggest problem that humans have ever been up against,” he declared.

McKibben warned of an apocalyptic future of human caused global warming. “The science of climate change is dark and hard,” he said and warned of 8 or 9 degree F [temperature rise] before the century is out.”

Also featured on the panel with McKibben was author Naomi Klein, author of the new book “This Changes Everything: Capitalism vs. The Climate”. See: Warmist Naomi Klein: ‘Capitalism is irreconcilable with a livable climate’ – Facing climate change head-on means changing capitalism

During the panel discussion, Klein was asked: “Even if climate change issue did not exist, you would be calling for same structural changes. Klein responded:  ‘Yeah.’

“Yes, I would still be for social justice even if there was not climate change. Yes, you caught me Marc,” Klein answered sarcastically as she abruptly ended the interview. [Also see: EU Commissioner: Global Warming Policy Is Right Even If Science Is Wrong ]

Klein told the activists she recommended “weaving this [climate] movement into all of our movements.”

Klein also singled out Climate Depot’s Marc Morano during her panel presentation, noting that “climate deniers and Heartland Institute people like Marc Morano, who I am told is here tonight, they understand that if the science is true, if the science is right, then of course we have to break every rule in their idiotic playbook because it is at war with life on Earth. ” The audience roared with approval.

Klein noted that the “ecological clock is ticking.”

“We are dealing with an existential terror,” she added.

Climate Depot’s Morano note: [I was reported to security for just being at the event. At this McKibben panel discussion, I was told “You cannot ask questions.” My reply was, “I have lots of questions.” Attendees recognized me and delivered long monologues on what a scurrilous human I was for “denying” global warming. Organizers of the People’s Climate March were warned days ago that I would be attending the march and the activists were warned not to speak with me.  See: Climate Depot’s Morano — The Most Feared Man at the Climate March?! Receives Threatening Email & Organizers warned Morano attending march, advised ‘not to engage’ – Climate Depot is also filming for the new climate documentary ‘Climate Hustle’]

When Hillary Clinton’s name was mentioned during the event, loud boos erupted throughout the room.

Author Chris Hedges was also on the panel. In an interview with Climate Depot, Hedges seemed to acknowledge the futility of governments trying to impact the climate.

Climate Depot asked him what impact he expects UN treaties or EPA regulations to have on the climate and whether he things they are worth implementing.

“It’s the difference between resisting for a slim chance of life and sort of passively accepting your own death. Why take it lying down? Lots of people have been in a situation where they realize their probably doomed. The climate science isn’t good,” Hedges explained.

Flashback 2013: Bill McKibben is not what he seems to be

Pop Culture Mentions Of Global Warming Have Plummeted Since 2007

Senate Dems rally behind major climate march:’Climate change deniers need to pull their heads out of the sand and stop obstructing efforts to address climate change’

Warmists excited: ‘Climate March Could Be a Turning Point on Global Warming’ – May ‘transition from being a science and policy issue into a full-fledged social movement. Perhaps it will become as large as the gay rights and civil rights movements’

Flashback 2013: Bill McKibben is not what he seems to be

Alex Epstein: Six Reasons Why the UN Should Not Intervene on Fossil Fuel Use (A Response to the Misguided People’s Climate March)