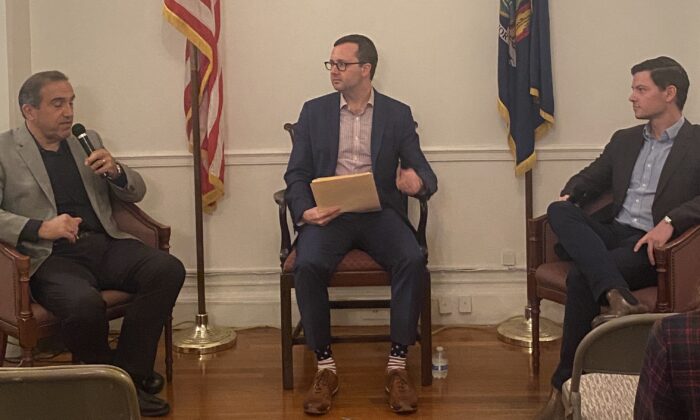 Republicans are divided when it comes to climate change, but the issue is likely to be brought into unified focus after the mid-term elections, according to Metropolitan Republican Club (Met Club) panelists.

“If Republicans take both Houses of Congress, that will throw a wrench in Biden’s climate agenda and the question will become, ‘What will the climate action items be that the 73-person strong Conservative Climate Caucus will come to the table with,’” asked Met Club Treasurer John H. Sweeney.

Sweeney was the moderator between two panelists debating opposing GOP views on the issue this week at the Met Club’s tiny East 83 Street townhouse on Manhattan’s Upper East Side.

“It’s a debate that more Republicans wish was happening,” Sweeney told The Epoch Times. “They would like to see a substantial policy discussion on what we actually support as a party rather than just hearing what we’re against.”

Founded in 2017, ACC’s mission is to motivate young conservatives on the belief that economic and environmental success go together while ClimateDepot.org is a project stemming from the non-profit, Committee for a Constructive Tomorrow (CFACT), which rejects the theory that human activity causes climate change.

“The Democratic Party will pay a price for their all-in philosophy on climate in the mid-term elections,” Morano said. “All they talked about was green energy, net zero, and climate and what it’s going to get them is a massive repudiation at the polls.”

The CCC characterizes itself on their website as a coalition that educates Republicans about conservative climate proposals while fighting policies that hurt the U.S. economy, American workers, and national security.

“The Caucus is not driving a policy agenda,” Robinson said. “What we’ll be pushing for is permitting reform; that’s the number one priority.”

Permitting reform, which is expected to shake loose some $3 trillion in clean energy investments between now and 2032, is one of the few environmental narratives that Morano and Robinson agreed on, along with clean water and clean air.

“Permitting reform makes it easier for us to get better American energy, cheaper and quicker, and to compete with foreign countries,” said Morano; the author of ‘The Politically Incorrect Guide to Climate Change,’ ‘Green Fraud,’ ‘Why the Green New Deal Is Even Worse Than You Think,’ and ‘The Great Reset: Global Elites and the Permanent Lockdown.’

Overall, the speakers differed in view on the costs of climate change impacts and what policies are actually effective to deal with any of these impacts.

“Just because we don’t like the Green New Deal doesn’t mean we should toss out climate change as an issue,” Robinson said.

Morano, on the other hand, doesn’t see climate change presenting any significant danger above existing natural disasters that require big government mandates to address. Instead, he believes that the U.N.-led climate agenda itself is the greatest threat to progress. He wants the Republican party to craft an American energy policy that promotes homegrown energy regardless of the varying views on climate.

“Wealth creates cleaner environments and technology creates lower emissions,” Morano said. “If you’re worried about climate, this is the way to go forward.”

Robinson argued that the GOP must cater to young conservatives who do believe that climate change is a threat, while Morano strongly opposes that approach.

“I don’t look at Greta Thunberg or the Youth Climate Movement that way,” he said. “I look at it as propagandizing kids and the last thing we want to do is legitimize it so that they’ll vote for us. I don’t buy that.”

Juliette Fairley is a graduate of Columbia University’s Graduate School of Journalism. Born in Chateauroux, France, and raised outside of Lackland Air Force Base in Texas, Juliette is a well-adjusted military brat. She has written for The New York Times, The Wall Street Journal, TheStreet, Time magazine, Newsmax, and many other publications across the country. Send Juliette story ideas at [email protected]

"Any effect that people attribute to carbon dioxide has been positive, such as warmer winters, which lowers the death rate," Morano argued. "The idea that it's some danger only exists in these ridiculous computer models using the most extreme scenarios." https://t.co/cw4Tpookcs