“We are seeing what’s happening in Sri Lanka, we are seeing what’s happening in the Netherlands, there are protests in other countries growing, [and] Canada is following the same line with fertilizer. This is a war against modern civilization. Morano blamed the World Economic Forum and U.S. climate envoy John Kerry, who “can go to the CEOs of major corporations and get them to sign a climate pledge, which then commits them to all of these green goals.” (see: The Great Reset: Global Elites and the Permanent Lockdown)

“They believe that us, the unwashed masses, if left to our own devices, will create inequity, racism, environmental destruction, [and] the climate crisis,” Morono claimed. “They literally want to regulate not just our farming but every aspect of our lives, and that is really what the World Economic Forum and the United Nations is after here, is controlling humans.” 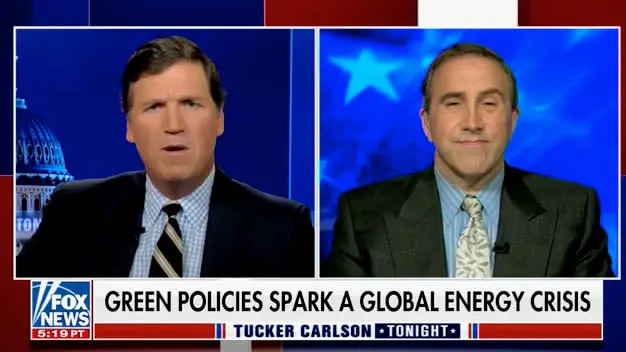 Daily Best Excerpt: Carlson began by discussing the ongoing public revolt against political leaders in Sri Lanka amid food and fuel shortages. The protests are the result of a combination of factors including excessive government borrowing, heavy monsoons, depleted tax and tourism revenue, the decreased value of the rupee, and a government ban on chemical fertilizers that limited harvests. Carlson honed in on this final cause.

What has happened in the island nation is an example of a country being “driven into the ground by green energy schemes thought up by morons like… [Rep. Alexandria Ocasio-Cortez] AOC,” Carlson said, marking yet another instance of the New York congresswoman’s name being mentioned derisively on the primetime Fox show.

“We are watching countries around the world… collapsing and entering into a state of revolution because these morons tampered with their energy grids. But they don’t care,” Carlson said. “They are going to continue doing it unless someone stops them—until exactly the same thing happens here.”

“I think green energy and this whole war on agriculture… the voters cannot support this anymore,” Morano said.

“It is a war against people,” Carlson chimed in. Life expectancy will “drop to the floor” if decision makers even so much as “tamper with” fossil fuels, which are “our greatest blessing,” he added.

“How do we allow people like [Ocasio-]Cortez and [Joe] Biden, who do not know what a carburetor is, to lecture us about something as complex as energy policy? Like, this is insane,” Carlson huffed.

Morano responded by blaming individuals in the World Economic Forum and U.S. climate envoy John Kerry, who “can go to the CEOs of major corporations and get them to sign a climate pledge, which then commits them to all of these green goals.”

“They believe that us, the unwashed masses, if left to our own devices, will create inequity, racism, environmental destruction, [and] the climate crisis,” Morono claimed. “They literally want to regulate not just our farming but every aspect of our lives, and that is really what the World Economic Forum and the United Nations is after here, is controlling humans.” Tucker Carlson’s full opening monoluge: Fossil fuels are the thing that make the US a rich country – but Biden doesn’t care
# The UN Chronicle, which bills itself as “The magazine of the United Nations, Since 1946” originally published this essay in 2008 by Professor George Kent of the University of Hawaii: “Hunger has great positive value to many people. Indeed, it is fundamental to the working of the world’s economy. Hungry people are the most productive people, especially where there is a need for manual labour. … How many of us would sell our services if it were not for the threat of hunger?”

“More importantly, how many of us would sell our services so cheaply if it were not for the threat of hunger?” …

“For those of us at the high end of the social ladder, ending hunger globally would be a disaster. If there were no hunger in the world, who would plow the fields? Who would harvest our vegetables? Who would work in the rendering plants? Who would clean our toilets? We would have to produce our own food and clean our own toilets. No wonder people at the high end are not rushing to solve the hunger problem. For many of us, hunger is not a problem, but an asset.”

Update: After outcry, the UN pulls the essay from its website on July 6, 2022, claiming it was satire! (UN essay archived here🙂

Climate Depot’s Morano comments: “This is a UN article and was published in 2008 in the UN Chronicle. It is now just getting media attention and the author of the article, Professor George Kent, told Climate Depot on July 6, 2022, that the UN article is most definitely not a ‘satire’ but intended to be ‘provocative.’ The UN is now trying to erase history by deleting the essay and falsey pretending that it was merely a “satire.”

Given how the world has been transformed under the ‘new normal’ of COVID lockdowns, it seems this old UN Chronicle article presciently reveals how the World Economic Forum and the UN & the WHO, seek to rule humanity with an iron bureaucratic fist and wish to keep the ‘masses’ poor, tired, and hungry.” Meanwhile, a new July 2022 UN report finds: U.N. says 2.3 billion people severely or moderately hungry in 2021

Watch: The Great Reset & the UN’s New Slavery. Morano with Sebastian Gorka One on One

“Its leaders fell under the spell of Western green elites peddling organic agriculture and “ESG,” which refers to investments made following supposedly higher Environmental, Social, and Governance criteria. Sri Lanka has a near-perfect ESG score (98) which is higher than Sweden (96) or the United States (51).” …

“The numbers are shocking. One-third of Sri Lanka’s farm lands were dormant in 2021 due to the fertilizer ban. Over 90% of Sri Lanka’s farmers had used chemical fertilizers before they were banned. After they were banned, an astonishing 85% experienced crop losses. The numbers are shocking. After the fertilizer ban, rice production fell 20% and prices skyrocketed 50 percent in just six months.”

Sri Lanka & the global revolt against the laptop elites: ‘From Sri Lanka to the Netherlands, Albania to Canada, the masses are stirring’

Sri Lanka’s quest “to become a Net Zero nation. A nation of fertiliser-free farming.” … In April last year, the Sri Lankan government banned the import of chemical fertilizers and pesticides. Its aim was to encourage organic farming. This was a borderline psychotic policy – 90 percent of Sri Lanka’s farmers use fertilizers, and they predicted, rightly, that their crop yield would diminish in the absence of these modern substances. The production of rice, tea and rubber was seriously undermined by the ideological rush to organic. …

The World Economic Forum promoted organic in Sri Lanka. Many elite campaigners in the West advocated for Sri Lanka to move to full organic, some of them supported by funds from ostentatiously eco-friendly corporations like Google, Disney and JPMorgan. …

The green ideology may provide the new elites with a sense of purpose, flattering their narcissistic delusion that they are saving the planet from a man-made heat death, but it hits the pockets of workers in the West who will end up paying for the Net Zero madness, and it inflames hunger and destitution in those parts of the world not yet as developed as the West.

‘In a bid to make new taxation new green and eco-friendly.’ The Tragedy Of Sri Lanka: A Cautionary Tale On ‘Going Green’ – ‘Stems from a fertilizer reduction policy’

“The enviros got what they wanted. Sri Lanka has a near-perfect ESG score (98) which is higher than Sweden (96) or the United States (51). It also can’t feed its people and it has run out of nearly everything.”

Watch: Morano on Newsmax TV: ‘What you’re seeing in the Netherlands is literally a preview of what’s going to happen globally’ 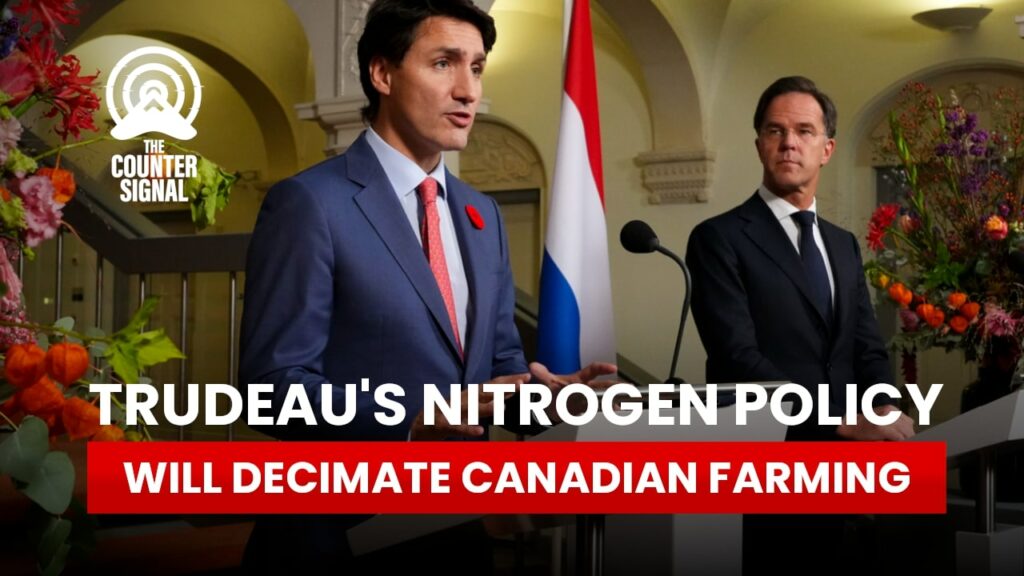 In December 2020, the Trudeau government unveiled their new climate plan, with a focus on reducing nitrous oxide emissions from fertilizer by 30% below 2020 levels by 2030. “Fertilizers play a major role in the agriculture sector’s success and have contributed to record harvests in the last decade. They have helped drive increases in Canadian crop yields, grain sales, and exports,” a news release from Agriculture and Agri-Food Canada reads.

“However, nitrous oxide emissions, particularly those associated with synthetic nitrogen fertilizer use have also grown significantly. That is why the Government of Canada has set the national fertilizer emissions reduction target, which is part of the commitment to reduce total GHG emissions in Canada by 40-45% by 2030….” This is a tacit admission that any attempt to lower admissions by reducing nitrogen fertilizer will consequently lower crop yields over the next decade, hurting the Agriculture sector and, more importantly, hurting farmers.

The draft, dated June 15 and prepared by aides of European Council President Charles Michel, was to be presented at a summit of EU leaders last week, however the EU Commission then “explicitly opposed the text,” warning that supporting fertilizer production in developing nations was incompatible with their ‘green’ initiatives.

Reuters: “The EU Commission explicitly opposed the text, warning that supporting fertiliser production in developing nations would be inconsistent with the EU energy and environment policies, officials said.” … “Fearing a plan to invest in plants in Africa would clash with EU green goals.”

Europe at risk of civil unrest unless it returns to fossil fuels, EU warns 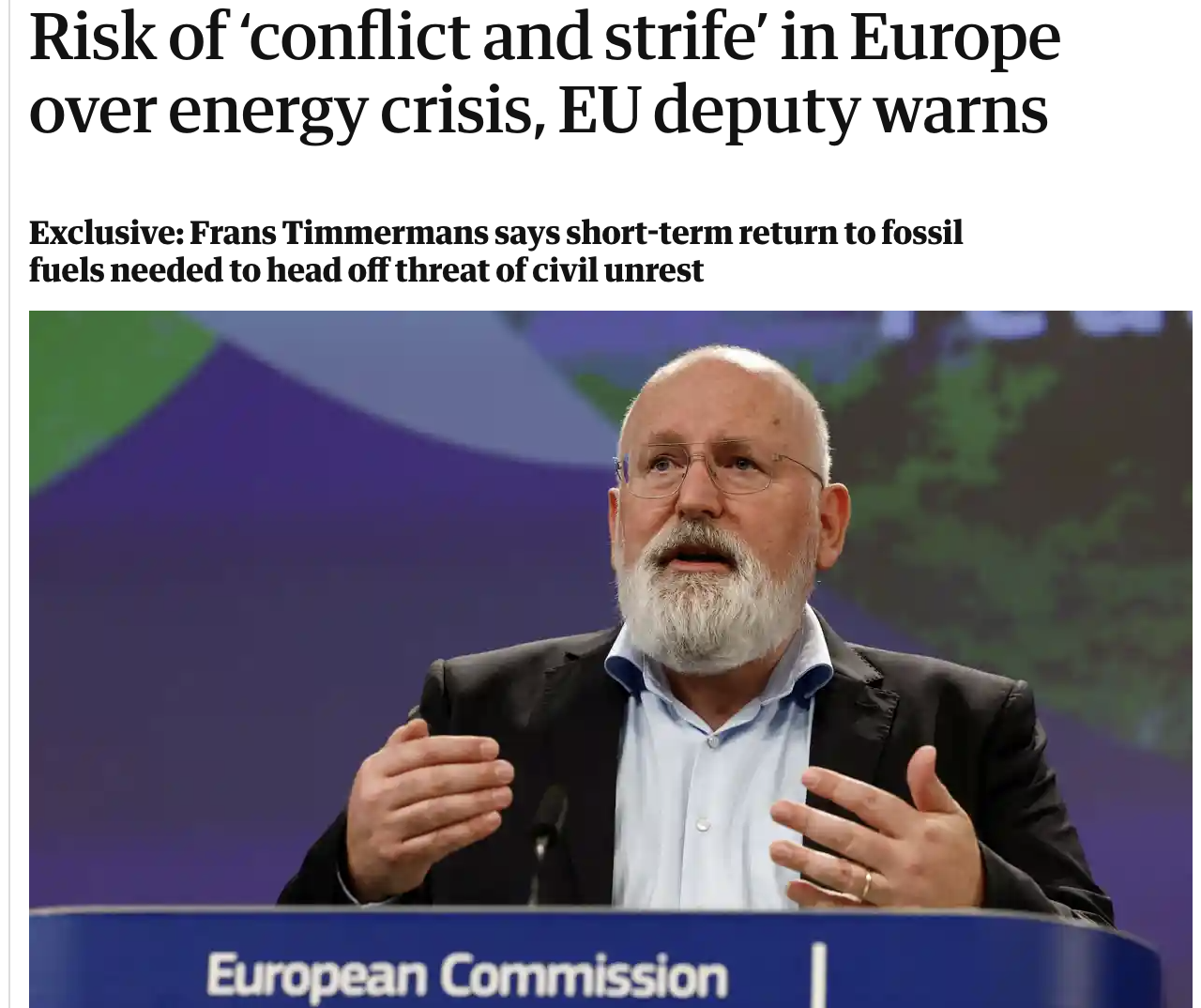 Great Food Reset: Fmr. UN climate chief Figueres urges ‘Changing what we eat is a radical act that will make us & nature healthier & happier’ – COVID ‘has taught us that rapid change is possible’