Calls to prevent fossil fuels to people of color: ‘Africa must forgo gas exploration to avert climate disaster, warn experts’ – ‘Cannot rely on the failed system of the last 200 years’ 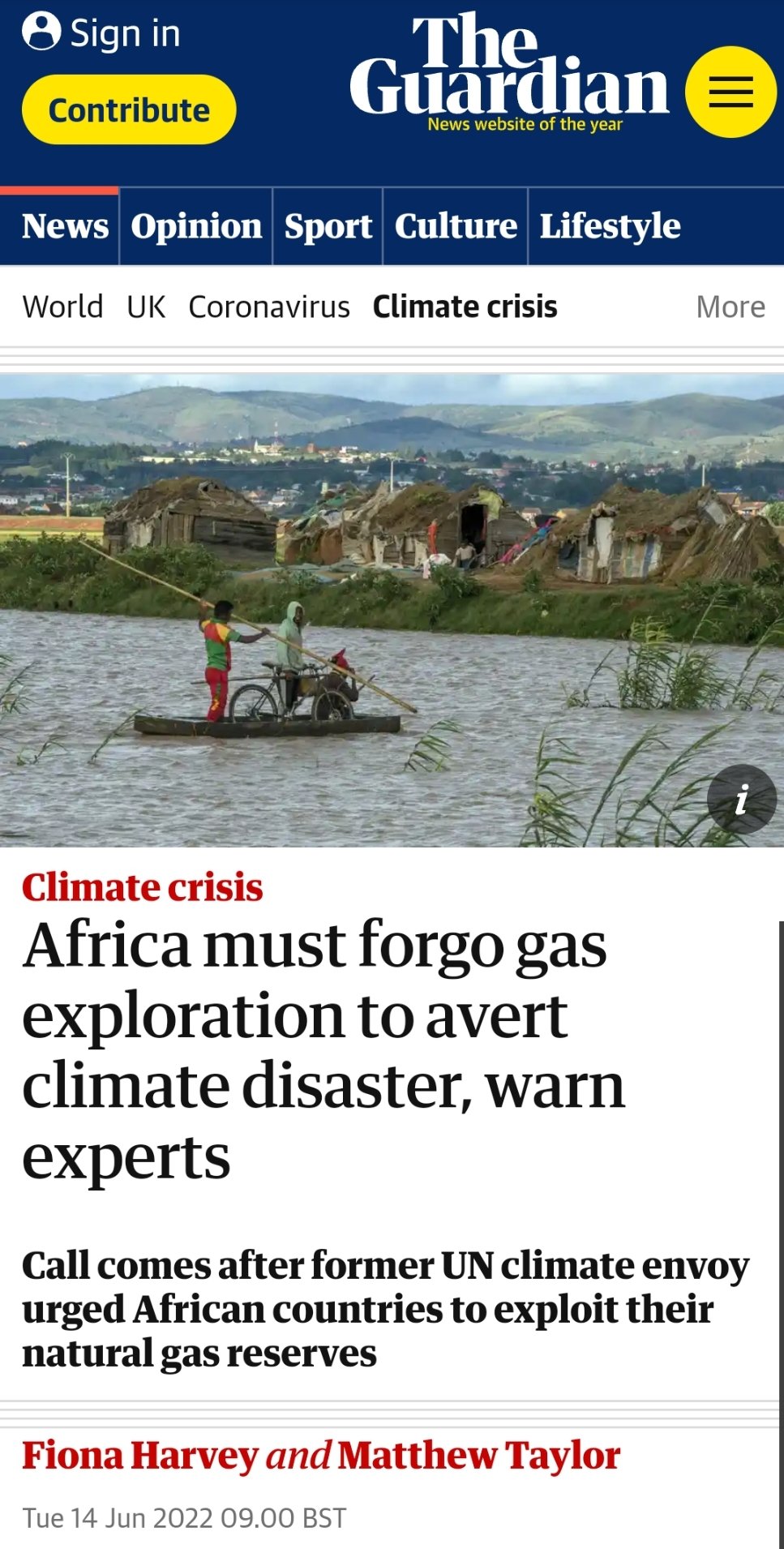 UK Guardian: Africa must embrace renewable energy, and forgo exploration of its potentially lucrative gas deposits to stave off climate disaster and bring access to clean energy to the hundreds of millions who lack it, leading experts on the continent have said.

Mohamed Adow, the director of the Power Shift Africa thinktank and 2020 winner of the Climate Breakthrough prize: “For Africans to achieve the lives of dignity that energy access should bring, we cannot rely on the failed system of the last 200 years. We must leapfrog our thinking and make the investment into distributed renewable energy systems that won’t poison our rivers, pollute our air, choke our lungs and profit only a few,” he told the Guardian. ...

But Mary Robinson, a former president of Ireland, UN commissioner for human rights and UN climate envoy, stoked controversy when she backed an expansion, saying African countries should exploit their gas reserves.

By Fiona Harvey and Matthew Taylor

Africa must embrace renewable energy, and forgo exploration of its potentially lucrative gas deposits to stave off climate disaster and bring access to clean energy to the hundreds of millions who lack it, leading experts on the continent have said.

Their call came as the UN secretary general, António Guterres, warned that exploring for gas and oil anywhere in the world would be “delusional”.

Several African leaders are considering pushing for new investment in exploration as gas prices around the world soar. Some European countries are also eager to provide such investment to replace supplies from Russia.

She said the gas should be used within the continent for clean cooking and power generation for the 600 million people who lacked access to power and the 900 million who were cooking on biomass or dirty oil, rather than exported for profit.

Mohamed Adow, the director of the Power Shift Africa thinktank and 2020 winner of the Climate Breakthrough prize, said Robinson was wrong.

“For Africans to achieve the lives of dignity that energy access should bring, we cannot rely on the failed system of the last 200 years. We must leapfrog our thinking and make the investment into distributed renewable energy systems that won’t poison our rivers, pollute our air, choke our lungs and profit only a few,” he told the Guardian.

Making a distinction between voices from the west and those from Africa, he said: “Climate justice champions who actually live in Africa are very clear that we want access to energy for everyone – but equally we do not want to lock in climate catastrophe for everyone.”

He was joined by Nnimmo Bassey, the director of the Health of Mother Earth Foundation in Nigeria. “Decades of oil and gas extraction on the continent has fed foreign markets and only muddied the water, built violence, and left the people in the cold and in the dark,” he said, highlighting the experience of Nigeria, the Niger Delta and Mozambique, characterised by pollution and profiteering by a few while local people remained impoverished.

He accused political leaders of ignoring these concerns: “Sadly, African politicians acting as middlemen to transnational corporations are happy to parrot this song despite local resistance and the realities of ecocide in the fossil fuel fields.”

The issue of gas in Africa is likely to prove a flashpoint at the Cop27 UN climate summit this November in Egypt. Robinson’s views, first expressed in an interview with the Guardian, sparked a row at UN climate talks in Bonn, where countries have held meetings over the past fortnight in preparatory negotiations for Cop27.

Several African countries are thought to want to use Cop27 to argue for the continent to be allowed to exploit its gas, taking advantage of the fossil fuel bonanza that has followed Russia’s invasion of Ukraine. Egypt is sympathetic, with the finance minister, Mohamed Maait, telling an audience in the City of London recently that poor countries must not be “punished”.

However, Guterres made clear in a speech on Tuesday morning at the Austrian World Summit in Vienna that no new fossil fuels should receive investment.

He said: “New funding for fossil fuel exploration and production infrastructure is delusional. It will only further feed the scourge of war, pollution and climate catastrophe. The only true path to energy security, stable power prices, prosperity and a liveable planet lies in abandoning polluting fossil fuels, especially coal, and accelerating the renewables-based energy transition.”

He did not refer to Africa specifically but indicated the continent was included, by adding: “Renewables are the peace plan of the 21st century. Cheaper, more reliable and fairer energy options are already available in the shape of wind and solar. This is true for all regions.”

He called for a tripling of investment in renewables, the removal of red tape that blocked wind and solar projects and for more of the underlying technology to be made available for use in poor countries through the sharing of intellectual property known as technology transfer.

Prof. Roger Pielke Jr. in Financial Times: Climate activists ‘promote green imperialism that helps lock in poverty’ – ‘Climate policy robs the world’s poor of their hopes’ – ‘Having failed to stem carbon emissions in rich countries or in rapidly industrializing ones, policy makers have focused their attention on the only remaining target: poor countries that do not emit much carbon to begin with…Obama administration ‘imposed a cap on emissions from energy projects of the Overseas Private Investment Corporation, a US federal agency that finances international development. Other institutions of the rich world that have decided to limit support for fossil fuel energy projects include the World Bank and the European Investment Bank. Such decisions have painful consequences. A recent report from the non-profit Center for Global Development estimates that $10bn invested in renewable energy projects in sub-Saharan Africa could provide electricity for 30m people. If the same amount of money went into gas-fired generation, it would supply about 90m people – three times as many’

S. African activist slams UN’s ‘Green Climate Fund’: ‘Government to govt aid is a reward for being better than anyone else at causing poverty’ — ‘It enriches the people who cause poverty’ – ‘The UN is saying to poor countries: ‘Those of you who adopt more anti-prosperity, anti-jobs, and anti-growth policies — under the pretense of environmentalism — we will enrich you”

Watch: Morano on Fox on UN Climate Fund & Reparations: ‘UN climate fund will subsidize governments that are best at keeping people poor. That is obscene’

Al Gore warns black people hardest hit by ‘global warming’ – Flashback 2014: Gore promoted ‘fertility management’ to reduce population in Africa – Gore in 2018: “Speaking at a memorial to the victims of lynching, the former vice-president warned of the disproportionate impacts of global warming”

Gore in 2014: Al Gore advocated “fertility management” to reduce the number of Africans and help mitigate climate change. Gore made his remarks alongside of Bill Gates at a World Economic Forum. The former vice president explained that “making fertility management
ubiquitously available” is “crucial” to reduce resource use. “Africa is projected to have more people than China and India by mid-century—more than China and India combined by end of the century. and this is one of the causal factors that must be addressed,” Gore warned.

Al Gore’s “Fertility Management” Pitch, in a Nutshell: A wealthy white Western politician is telling the world that there are going to be far too many black people in Africa.