Science Daily here reports: “Climate changes in the tropical Pacific have temporarily put the brakes on rapid warming and ice melting in Greenland.“

Science Daily adds: “A puzzling, decade-long slowdown in summer warming across Greenland has been explained by researchers at Hokkaido University in Japan. Their observational analysis and computer simulations revealed that changes in sea surface temperature in the tropical Pacific Ocean, thousands of miles to the south, trigger cooler summer temperatures across Greenland. The results, published in the journal Communications Earth & Environment, will help improve future predictions of Greenland ice sheet and Arctic sea ice melting in coming decades.” 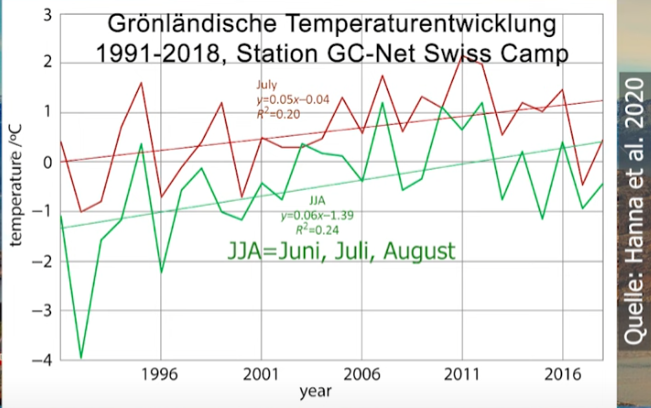 Apparently this is connected to changes to the El Niño climate pattern in the Pacific, say the researchers, and these powerful Pacific cycles have ramifications for weather and climate patterns around the globe.

“The findings, and the slowdown in Greenland’s summertime warming, do not undermine the seriousness of climate change or the need to tackle greenhouse gas emissions,” Matsumura insists. But the scientists admit that the cooler summers in Greenland have been unexpected They also need to need to start admitting that they’ve been severely underestimating these powerful natural oceanic cycles, naively thinking that CO2 drives the whole show.

“We expect that global warming and ice sheet melting in Greenland and the rest of the Arctic will accelerate even further in the future due to the effects of anthropogenic warming,” Matsumura says.

And Matsumura will keep telling us that – until, that is, the next natural cycles bury man’s modest impact once again. A trace gas is no match for the gigantic, still mysterious thermal fluxes of the oceans…a phenomenon for which we have little historical data and remains poorly understood.