Analysis: Why we really DON’T need to eat less meat to save the planet

By SAM TONKIN and JONATHAN CHADWICK  and SOPHIE CURTIS FOR MAILONLINE

Getting people to eat less meat is a ‘fantasy’ and the focus should instead be on finding futuristic ways of slashing greenhouse gases in farming to save the planet, a leading expert has claimed.

Professor Mick Watson, who specialises in methane reduction strategies in cattle, told MailOnline that lower-emission cows being bred by geneticists and the wider use of ‘methane inhibitor’ food additives were two effective options.

The latter claims to reduce the amount of the gas that the animals emit when they graze by 30 per cent.

Professor Watson said shifts to plant-based diets could help to reduce emissions but cautioned that there was ‘no sign that it is happening quickly enough to make a difference’.

Much like the government, he rubbished the idea that telling Britons to eat less beef, pork and lamb was crucial for the UK to achieve its net zero target, adding: ‘Consumers are showing no desire to reduce meat and dairy consumption.’

The academic was responding to remarks made earlier this week by Environment Secretary George Eustice, who said the government had ‘no intention’ of telling the public to eat less meat in the battle against climate change. 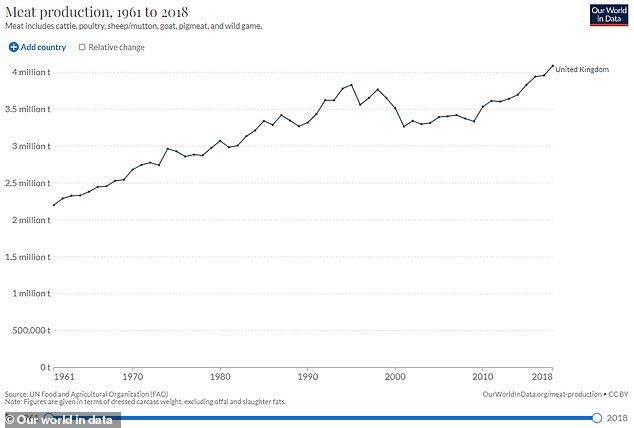 HOW DOES EATING MEAT AND DAIRY HURT THE PLANET?

Eating meat, eggs and dairy products hurts the environment in a number of different ways.

Cows, pigs and other farm animals release huge amounts of methane into the atmosphere. While there is less methane in the atmosphere than other greenhouse gases, it is around 25 times more effective than carbon dioxide at trapping heat.

Raising livestock also means converting forests into agricultural land, meaning CO2-absorbing trees are being cut down, further adding to climate change. More trees are cut down to convert land for crop growing, as around a third of all grain produced in the world is used to feed animals raised for human consumption.

As well as this, the nitrogen-based fertiliser used on crops adds to nitrous oxide emissions. Nitrous oxide is around 300 times more effective at trapping heat in the atmosphere. These fertilisers can also end up in rivers, further adding to pollution.

His comments were in contrast with statements from the Climate Change Committee (CCC), which advises the government on emissions targets.