It’s The Energy, Stupid! Putin Is Taking Advantage Of The Left’s Climate Obsession

This is a battle between the world as it is and the world as the Left wishes it to be. Progressive Western leaders are not up to the task.

We’re seeing now what happens when there is a clash of priorities between left-leaning Western democracies and the leader of a petrol state who sees an opportunity to increase his country’s oil and gas production. He’s doing this because the demand continues to be high, prices are on the rise, and there are no viable alternatives because the environmentalists on the left won’t even consider nuclear power. There’s a lot of money to be made, and Putin thinks Russia should be the beneficiary of it.

Western Leaders are absolutely, unswervingly committed to an ideology that has left them vulnerable to Russia and China, who don’t share the West’s views on energy policy.

There has been a lot of speculation about why Vladimir Putin decided to invade Ukraine almost two weeks ago — getting the ol’ USSR gang together as a legacy project, protecting ethnic Russians and supporting separatist elements in the regions of Donetsk and Luhansk, the “de-Nazification” of Ukraine, pushing back against NATO imperialism, reacting to some bio-labs studying some of the deadliest diseases in the world that was a myth until yesterday, or even that he’s crazy, dying, or perhaps both simultaneously.

But the most likely answer could be the most obvious one… energy.

Russia’s economy is based on fossil fuel exports — oil and gas are huge money-makers.

It’s so obvious that even CNN can see that Russia is dependent on oil and gas to keep its economy going.

It’s also important to note that there’s a lot of swagger around Russia’s position on the world stage that isn’t exactly warranted in the grand scheme of things.

Russia isn’t a superpower, at least not when it comes to the global economy.

Its gross domestic product puts it as only the 12th largest economy in the world according to the International Monetary Fund, about 25% smaller than Italy and more than 20% smaller than Canada, two countries with a fraction of its population…

Now, this isn’t to say that Russia isn’t a threat or that Putin isn’t an evil man who poisons his opposition — those things are true.

And it’s very obviously true that Russia led by Putin and the former Soviet oligarchs is a threat to America — the cyber attacks, the disinformation campaigns, the cozying up with enemies of freedom like China, Iran, Syria, etc. These are all terrible things.

But the worst thing that the Putin-led Russian government has largely gotten away with is the years-long disinformation campaign against fossil fuels.

We’ve known for some time now that Russia has been funding “Big Green” and pushing the West away from fossil fuels — which the Left openly embraces.

The Left is very interested in “Russian collusion” and tosses around many accusations that certain individuals are acting as “puppets of Putin” — but you don’t ever hear them mentioning the anti-fracking propaganda, do you?

That’s because there is an alignment of interests.

The Left won’t ever call out the many Russian disinformation campaigns against the fossil fuel industry in North America and Europe because they also want to stop the development of oil and gas in the West in order to achieve their ambitious climate agenda.

Because of a guy with the last name Biden, we know far too well that the Ukrainian energy sector was — and still is — riddled with corruption.

Even though the annexation of Crimea initially cost Russia billions of dollars in the form of sanctions and a plummeting stock market and currency, in the end, it all worked out for Putin because Russia absorbed Ukrainian oil and gas operations in the region, folding it right into its own state-controlled energy sector.

An article in Forbes from 2019 explains:

The real story here, however, is the gas.

There are nine so-called “blocks” of natural gas available for licensing in Ukraine’s Black Sea, the potential of which ranges from 92 billion cubic meters (bcm) to over 500 bcm, according to an April 2018 survey conducted by Deloitte. While this is a paltry amount compared to 635 bcm Russia produces annually, grabbing new supply and denying gas to Ukraine is an enticing ‘two birds’ opportunity for Moscow.

Russia’s energy ambitions in the Black Sea region are further helped by circumstance and geographical luck. Some 70% of potential natural gas deposits of the Black Sea are concentrated in just two blocks: Neptune Deep and Trident – well within Russia’s newly claimed Exclusive Economic Zone (EEZ) around the Crimea.

Moscow’s intent to exploit Ukraine’s natural gas deposits is not just idle speculation; it is currently underway. When Russian forces annexed Crimea in 2014, they seized subsidiaries of Ukraine’s state energy conglomerate Naftogaz operating in the Black Sea. The Kremlin appropriated these companies — and billions of dollars of equipment — and delivered them to Gazprom, Russia’s state-owned energy giant. In one fell swoop, Russia ended Ukraine’s offshore oil and gas operations and bolstered its own.

It was only a matter of time before Russia turned the thumbscrews on Ukraine to secure their position as an even larger exporter of oil and gas while simultaneously protecting Nord Stream 2 to increase Europe’s dependence on Russian gas.

That’s why Biden’s handing Putin Nord Stream 2 was such a strategic blunder.

While Europe and North America are raising the cost of living on their own citizens by cutting off their own fossil fuel production as they continue in the lofty goal of attaining “net-zero” emissions, pushing expensive and unreliable “green” alternatives, and introducing “carbon taxes” because an autistic teenager with emotional problems has told them that the world is going to end unless we revert to pre-Industrial carbon emissions levels — Russia recognizes an opportunity.

The reliance on fossil fuels hasn’t decreased. There is still a market for it, and, much to the climate zealots’ chagrin, there will be for a very long time.

The world still largely runs on fossil fuels. That will not change overnight, and wishes and dreams won’t make it so. For example, the new tech is being developed — Tesla, but it’s expensive, and many people just can’t afford it. It’s also not as reliable, and the infrastructure for charging EVs isn’t as ubiquitous as gas stations, even though that is improving with heavy subsidies by the government.

Do you notice that the only solutions that the “net-zero” zealots propose cost you more twice — once in tax subsidies and then from your own wallet? You get less, but it costs you more. It’s consistent with typical leftist ideology.

While the pain at the pumps continues, Western leaders like Biden, Trudeau, and Johnson are doggedly refusing to consider increasing fossil fuel production domestically. In contrast, the costs increase for their own citizens. Instead, they blame Russia for the increase in costs rather than admit that their own policies also had a hand in it.

Early on, they even refused to reduce imports of Russian oil and gas even though Russia’s petrol economy is funding the war in Ukraine.

The Left is now simultaneously lamenting that Putin’s invasion of Ukraine is hurting the global effort to “stop climate change” and seeing it as an opportunity to “accelerate” the transition to net-zero.

That sort of thing is getting a lot of applause from leftist, wingnut millionaire celebs like George Takei and Stephen Colbert who insist that it’s your “patriotic duty” or whatever to just take the higher gas prices because it’s immoral to use oil and gas from America or its allies like Canada or Europe. Remember, that’s just Russian propaganda, and they’re playing right into Putin’s hands. 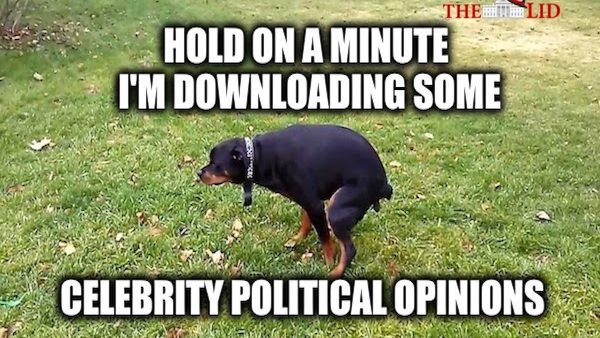 These celebs are not only completely out of touch, but they’re also not serious people. Of course, we already knew that.

The problem is that even less serious people who are even more out of touch are making the decisions.

The drippingly wealthy John Kerry’s first concern was how the invasion of Ukraine would affect the global effort to fight climate change. It was not the violation of sovereign borders or the vast amounts of human suffering and death inflicted on the Ukrainian people — it was that war would “distract” the world from the “climate crisis.” Dude, that is cold. Behold, the “compassionate” Left.

Biden is no better. He’s now claiming that the rise in gas prices — that has steadily increased since he became President and declared war on America’s energy sector (receipts here) — is solely the result of Putin’s actions 5,600 miles away. 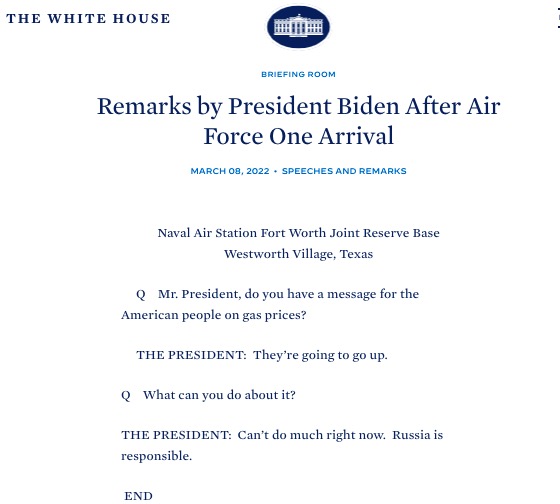 The West Wing LARPers in the administration think this is such a winning message that they’ve posted a very brief exchange between Biden and an unnamed reporter about gas prices on WhiteHouse.gov as an official statement.

Hear that? Gas prices are going up because of Putin. Not the current administration’s consistent attacks on the oil and gas industry in America.

While the Left turns this talking point into a hashtag, remember that Biden promised he’d do his damnedest to destroy America’s oil and gas sector if he became President.

It’s one promise that I, for one, wish that he hadn’t bothered to keep.

The Vice President recently urged Americans to “imagine” a net-zero future that isn’t yet possible and is only driving inflation and making life difficult for Americans right now. This current pain could be solved by increasing oil and gas production in countries that hold to Western values of democracy and liberty — such as they are these days — starting with the United States, Canada, and the United Kingdom.

But you know that the Biden-Harris administration and the Leftists in other Western democracies won’t ever do that. They’d rather fund Russia, Iran, Venezuela, and Saudi Arabia who don’t really give a damn about “net-zero” because they’re making money hand-over-fist by completely ignoring the religious climate fervor in the West.

The shortsighted moral preening of Big Green activists rejecting fossil fuel development within their own borders is creating a new alliance centered around Russia, China, and Iran, that I think in the future, Western democracies will come to regret.

But unfortunately, it won’t be before people have suffered greatly and Western democracies have damaged their own energy sectors beyond repair.

To all the leftwing pundits with Ukrainian flags in their profiles out there wondering why Putin is so very fixated on Ukraine — it’s because of energy, stupid.

The math is simple. A child could do it.

Now, if only someone — anyone — could explain this to the Shambling Husk of Mediocrity in the White House using very small words and speaking very, very slowly, maybe Joe would understand. But I wouldn’t hold my breath on that. This is, after all, Joe Biden we’re talking about.

Buckle up. It’s gonna get a whole lot worse because of the incompetents in power who refuse to see the world as it is and not as they wish it should be.

God help us all.