Morano: ‘In 2020, the United States was back to 1952 with energy, not just independence, but energy dominance'

Tucker Carlson: “So we wanted to walk you some of the likely consequences of what they are now doing in Eastern Europe and Marc Morano seemed like a good man to start with. Thanks so much for joining us tonight. So, without even getting into whether or not Ukraine is a democracy – I’m embarrassed to even – I mean, who cares. But I want to know what the effect on the United States and on the purchasing power of the average person, is likely to be from what they’re doing right now over there.

MORANO: “We are already seeing – the first part of it is in California, $6 a gallon. Gas is already up a dollar. Estimates are seven, $8 a gallon possible with recession if Putin, who we’ve given all of this power to by literally shutting down U.S. domestic energy. 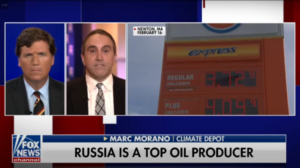 Just a little history lesson here. In 2020, the United States was back to 1952 with energy, not just independence, but energy dominance. We were the world’s largest oil and gas producer. More energy exports and imports, more energy production than consumption and we hadn’t done that since Harry Truman was president. Joe Biden came in at he said the first thing he wanted to do was jail fossil fuel executives. Biden’s energy secretary had done a video singing about no more gasoline, The is world aflame due to global warming.

Biden – by the way – Biden – I’m sorry, Obama’s energy secretary (Chu) said he wanted European-style gas prices. So what happened as he started shutting down the Keystone pipeline, banning drilling on federal lands and Anwar, and defunding energy projects through banks through environmental social governance (ESG). All sorts of things.

So a war on fossil fuels happens. We are now in a much, much weaker position one year into this administration to where now Vladimir Putin is the direct beneficiary of all this. And you can’t keep Europe out of this. Europe is many years ahead of their version of a disastrous Green New Deal. One professor in Europe actually said it’s typical Marxist garbage — what they’ve engaged in. Europe began shutting down their energy, so the whole world has been empowering basically three places. The Middle East for the OPEC, China, and now of course Vladimir Putin’s Russia.

So the people that are screaming the loudest that we need to go in and save democracy in Ukraine have destroyed our energy independence and dominance and made us so much more vulnerable to whatever Vladimir Putin may or may not want to do.”

Morano: No, there are estimates they build about a coal plant a week, they are about 50% of the world’s coal production. They laugh at all of these restrictions, but they were supplying most of our solar panels.

Morano: But here’s the thing. They are not going to learn. Academia has been calling these energy restrictions for decades. This energy policy, what have they done? “the Washington Post” a few months ago actually said that we – if Jimmy Carter had won a second term there would be no climate crisis. They lamented that Ronald Reagan won. To the academia and media elites, Jimmy Carter’s first term was a model, and that’s what they want to do and that’s what we’re facing here.

John Kerry wants to have an urgent climate summit. He announced on Monday. In the midst of all of this, he believes the climate is the greatest threat. Their energy policy is the greatest national security threat we face.

Tucker Carlson: Perfect. Marc, great to see you. Thank you.

Watch CFACT's Marc Morano @ClimateDepot on Tucker Carlson from last night slam net zero energy policies: "the people that are screaming the loudest that we need to go in…Ukraine have destroyed our energy independence, made us so much more vulnerable"https://t.co/ajPzkpuV3Q