More Evidence: Glaciers Existing Today Were Absent For Nearly All Of The Last 10,000 Years

The cryosphere is failing to cooperate with the anthropogenic global warming narrative that says rising greenhouse gas emissions should be catastrophically melting Arctic ice.

Nearby, the ~60 km-tongued Petermann Glacier didn’t even exist during the Roman Warm Period. As the chart on the bottom right of the image below shows, there was no ice in this region for all but a few centuries of the Holocene prior to 2,000 years ago. Petermann’s Little Ice Age size was similar to its modern condition.

Another glaciologist (Winker, 2021) asserts there is “no evidence” that Jostedalsbreen, a southern Norway glacier, even existed during the first several thousand years of the Holocene, or when CO2 hovered near 260 ppm. The glacier reached its maximum advanced phase during the Little Ice Age, which had CO2 concentrations in the 275 to 280 ppm range.

“The ‘Holocene Thermal Maximum’ or ‘Hypsithermal’ at Jostedalsbreen provides no evidence for any substantial glacial activity and can be characterised as a prolongated period of near (possibly even complete) glacier disappearance… By contrast, the highest glacial input is dated to 600 and 200 cal. a BP indicating the local ‘Little Ice Age’-maximum.”

Interestingly, after wasting away rapidly during the 1930s and 1940s, the glacier stabilized. From the 1950s to 1980s, there was a “slight overall advance” in ice extent. This corresponds to a similar melt pattern for the Nigardsbreen glacier. 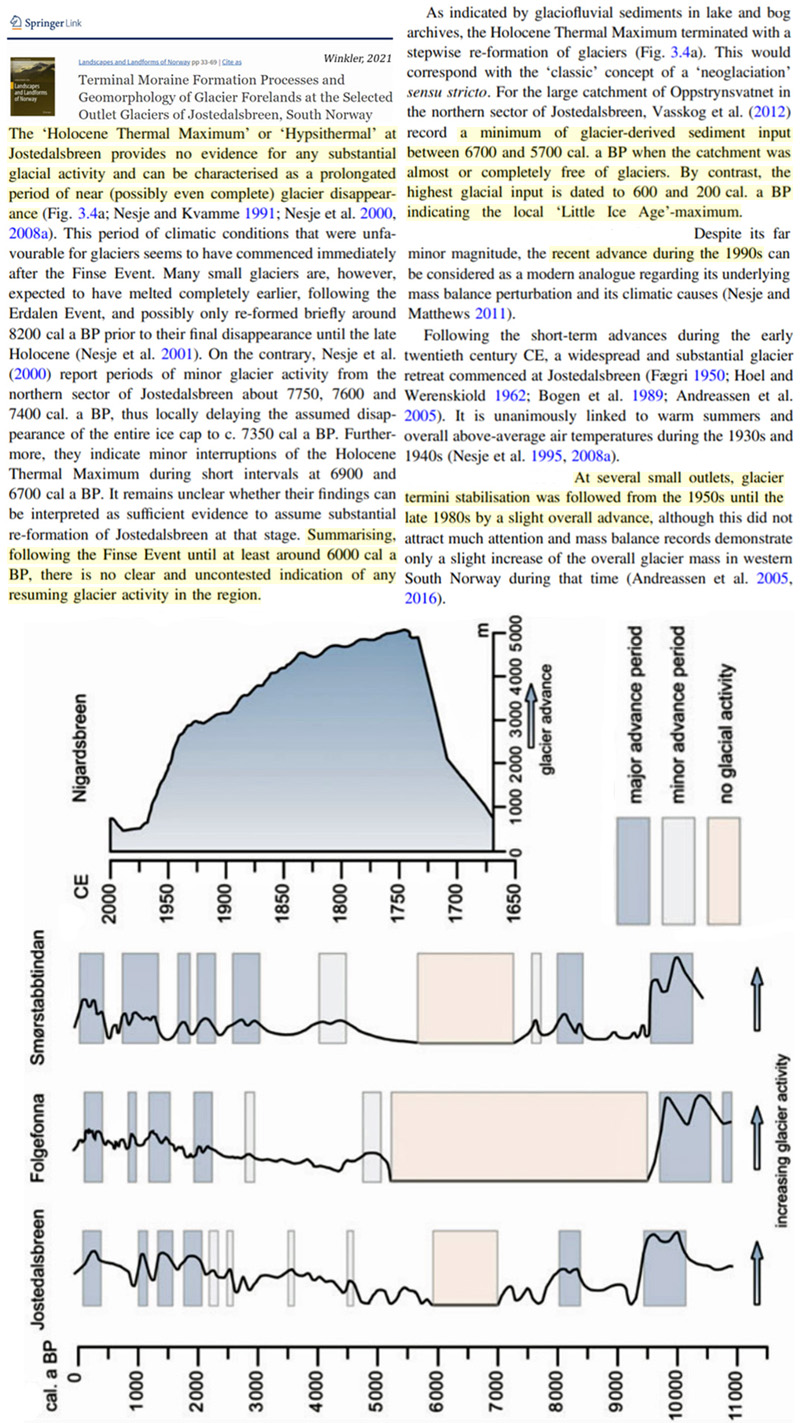 Several months ago we highlighted another new study documenting a much warmer-than-today Early and Middle Holocene in East Greenland. Ice caps were “absent” or far less extensive than they are presently during this period.

What may be surprising is that carbon-dated plant remains buried under retreating glaciers in East Greenland affirm these locations were not covered in glaciers as recently as 400 to 500 years ago, or during the Little Ice Age cold period.

The authors even acknowledge there were occasionally brief “cold stages” during the Holocene when Greenland’s glacier extent advanced to today’s levels.

Of course, this affirms that modern temperatures and ice volumes fall within the range of a “cold stage” too.

So, once again, there is no evidence to support the alarmist claims that modern glacier extents are unprecedented or even unusual relative to the last 10,000 years – including the last few centuries.