Watch: Morano in new video on how climate science has become ‘unfalsifiable’ – Predict both outcomes & You are always correct – ‘There is no way anyone can falsify the global warming theory now’

SCIENCE ABSURDITY: Climate Change Blamed For Lake Victoria Record High Levels (After Being Blamed For Low Levels in 2006)! @derStandardat After years of warnings it would soon dry up, now at RECORD HIGH LEVEL. https://t.co/XUCQ3uiw7C pic.twitter.com/iEW7kPPbfa

In it he examines Lake Victoria in Africa.

Some years ago, in 2006-2007, Lake Victoria in Africa reached near record low levels. The culprit of course, according to the world’s leading “experts”, was climate change due to manmade CO2 emissions. For example, Global Nature Fund Director Udo Gattenlöhner warned (translated from the German):

We are seeing the first effects of climate change on Lake Victoria and other lakes around the world. Without a rapid reduction in greenhouse gases by the industrial countries, the basis for life for millions of people is threatened.”

Austrian national daily Der Standard warned that the African lake was “drying out” in an article titled: “When a lake disappears”.

But then last summer, after months of rains, it was reported by EOS that Lake Victoria levels had since reached a “historic” high level: 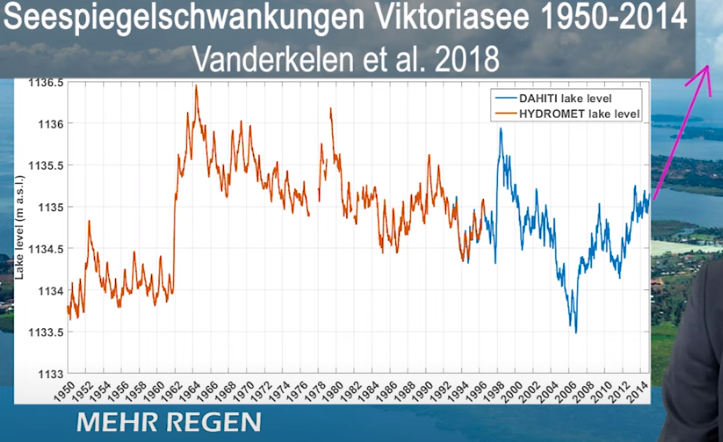 In his video, the German geologist says that the cause of the high level was the positive phase of the Indian Ocean Dipole, which lead to a doubling of the rainfall in the region.

Lake Victoria in fact recorded its lowest level in the early 1920s, bac when atmospheric CO2 was at levels near 300 ppm.

So why has Lake Victoria reached record high levels and flooded homes and hotels? According to Lüning, the “experts”, like Dr. Ramond Omollo, are again blaming (you guessed it!) climate change. 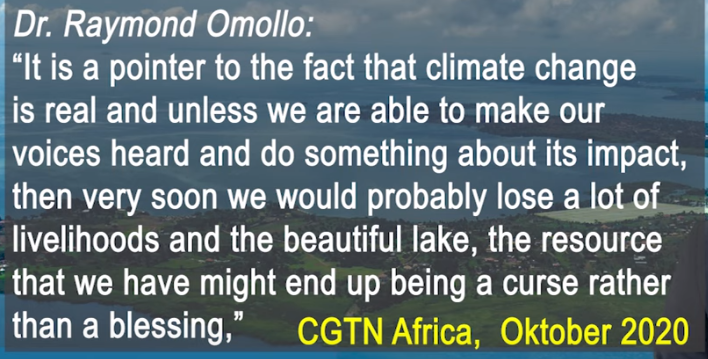 No matter if it’s high or low, manmade climate change will be blamed for all the water level changes in Lake Victoria. But serious scientists remind that the natural fluctuations need to be taken into account in order to avoid contradictory conclusions in the future.”

All images cropped from Klimaschau, Ausgabe 3