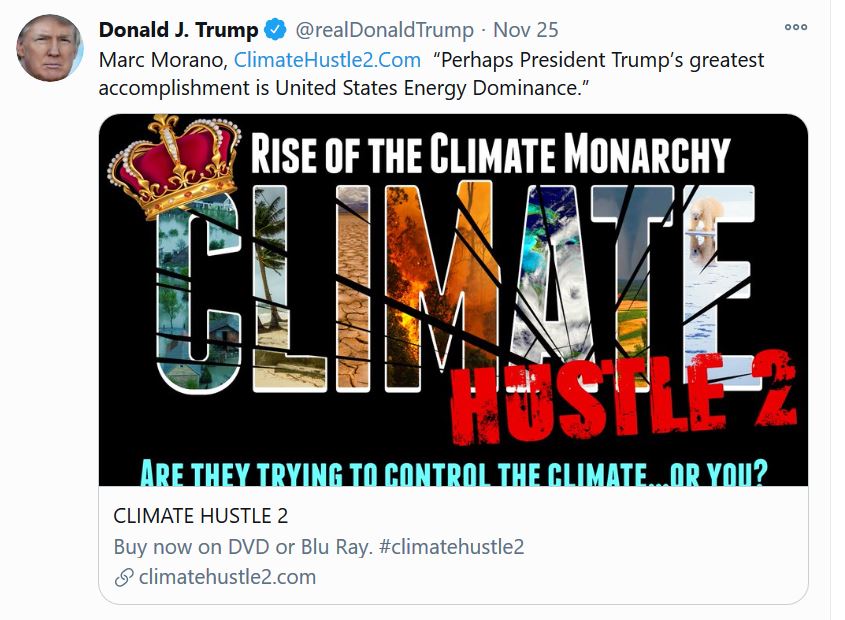 The tweet quotes a comment Morano made this morning during appearance on “Fox & Friends,” and the link is to the website for “Climate Hustle 2,” a documentary produced by Morano narrated by actor Kevin Sorbo that attempts to paint scientists and climate activists as alarmists.

The film focuses on researchers and scientists who reject the scientific consensus on climate change, portraying them as heroes working against the elite, and lists misleading claims and cherry-picked data about climate science (Climatewire, Sept. 28).

“Are these sensational claims based on solid empirical science? Do the facts line up with the hype?” Sorbo asks in a film trailer. “Well, an increasing number of scientists are becoming skeptical.”

The screen flashes clips of interviews with some longtime climate skeptics, including Richard Lindzen, a retired Massachusetts Institute of Technology astrophysicist, and Willie Soon, an astrophysicist who sparked controversy when it was revealed that his work had been funded by fossil fuel interests.

The White House didn’t immediately return a request for comment on whether Trump has seen the film in full.

It’s not surprising that the film would be in the Trump administration’s orbit.

The documentary features David Legates, a University of Delaware professor and well-known climate skeptic whom the administration recently hired for a senior position at NOAA.

Legates, whose views about climate change are widely rejected by the mainstream scientific community, has also been tapped to lead work on the Fifth National Climate Assessment, the periodic sweeping federal report on climate science.

“Climate Hustle 2 was provided to Trump and his administration and it includes several Trump administration scientists including Dr. Will Happer and Dr. David Legates,” Morano said in an email. “I can’t confirm he saw the film, but was most likely made aware of its release.”

Morano is himself a well-known figure in the climate denial world, having worked for the Senate’s most prominent skeptic, Sen. Jim Inhofe (R-Okla.).

He runs Climate Depot, a product of Committee for a Constructive Tomorrow, which has received funding from the energy industry.

Morano said the film “showcases how President Trump has stood against the anti-science climate claims and rejected the UN Paris pact and opposes the Green New Deal.”