Marc Morano: "Former Sec. of State John Kerry is poised to merge 'climate change' with COVID-19. Climate and COVID are intertwined in Kerry's worldview and he will be eager to hitch up the climate 'solutions' to the COVID remedies. Expect COVID lockdowns to morph into climate lockdowns."

Former Sec. of State John Kerry on 'the parallels between the coronavirus and the climate crisis': "Climate change is a threat multiplier for pandemic diseases, and zoonotic diseases — 70 percent of all human infections — are impacted by climate change and its effect on animal migration and habitats."

Biden Transition: “Former Secretary of State John Kerry will fight climate change full-time as Special Presidential Envoy for Climate and will sit on the National Security Council. This marks the first time that the NSC will include an official dedicated to climate change.”

A superb choice by President-elect @JoeBiden of @JohnKerry as Climate Envoy. Kerry’s experience and passion are exactly what we need to restore American leadership abroad and repair the alliances that are crucial to solving the climate crisis.

President-elect Joe Biden has tapped former Secretary of State John Kerry as a special presidential envoy for climate, the Biden-Harris transition said Monday. Kerry will sit on the National Security Council, marking the first time the NSC will include an official dedicated to the issue, the transition said. Kerry’s was one of several names released by Biden’s team on Monday, along with secretary of state nominee Antony Blinken and nominee for United Nations ambassador Linda Thomas-Greenfield.

Here is the https://t.co/O91vN2KQZl statement on @JoeBiden's selection of a career-long American traitor @JohnKerry to be the President's Climate Envoy.https://t.co/29FqXijPGr pic.twitter.com/Lvv2n0WSEK

John Kerry is so clueless about energy that he thinks eliminating fossil fuels would have no negative consequences. I took him to task for this in The Moral Case for Fossil Fuels. This kind of "energy denier" should not be "climate czar" or on our National Security Council. pic.twitter.com/D4Xz8twRel

Watch 1 hour speech in Aug 2020: Morano apologizes for wrongly believing climate ‘solutions’ were the greatest threat to liberty – Now says viral fears/lockdowns are greatest threat – Morano: “On behalf of climate skeptics everywhere, I would like to formally apologize for warning that ‘climate change’ was the biggest threat to our liberty over the last 30 years. Climate change ‘solutions’ are a big threat. It’s just not the biggest in the world.

Viral fear inspired lockdowns are the biggest threat.” “I didn’t see this coming. Public health, the unelected bureaucracy has stepped in and made th UN climate agenda look like an amateur or a farm league when it comes to expanding power and control and instilling fear.”

Bonus Chapter #2 from The Politically Incorrect Guide to Climate Change:

Excerpt: The climate activists have it backward. A 2011 study published by the Center for Strategic and International Studies titled “The Climate Wars Myth” found, “Since the dawn of civilization, warmer eras have meant fewer wars.” As author Bruno Tetrais explained, “History shows that ‘warm’ periods are more peaceful than ‘cold’ ones…

John Horgan, the director of the Center for Science Writings at the Stevens Institute of Technology, explained, “In spite of the recent surge in violence in the Middle East, war-related casualties have fallen over the last half-century, as temperatures have risen…

A 2013 study published in the Proceedings of the National Academy of Sciences found that cold eras were dark times in Eastern Europe. “Some of Eastern Europe’s greatest wars and plagues over the last millennium coincided with cold periods,” explained a summary of the study in Science News.

‘Odd from AP to do a John Kerry fact-check. Finds he lied/exaggerated about climate change’ 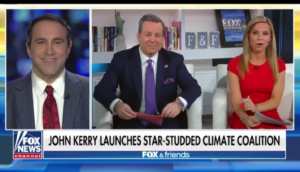 John Kerry Wants to Punish Those Who Mock Climate Change, Including Trump

“The biggest single thing that is lacking today is political accountability,” Kerry said. “People can mock the concept of climate change with impunity and there is no cost to pay. That’s got to stop.”

“Regrettably, President Trump has eliminated American leadership and replaced it (with) know-nothing denial,” Kerry said in an interview Thursday.

Climate Depot’s Marc Morano ripped the UN: ‘The UN climate process will do nothing for climate change and it is completely designed to enrich the UN.’

Sec. Kerry challenges climate skeptics at House hearing: If skeptics are wrong and nothing is done, ‘life on the Earth can literally end’