'The Climate Miracle is nature controls the climate. Our carbon dioxide emissions are irrelevant.' 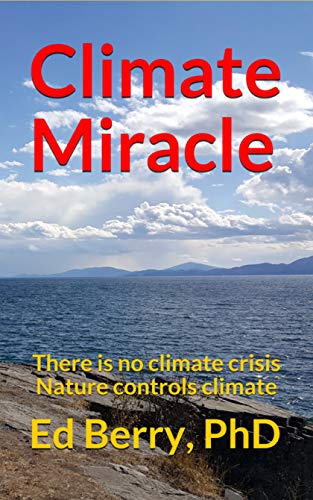 They told you they would save the Earth if you followed their instructions. You must believe what they tell you, accept higher energy costs, pay much more in taxes, forget your personal freedom, and vote for their globalist world government. Then they will absolve you from your environmental sins and save the planet for you. Climate Miracle proves the alarmists’ climate claim is a fraud. The Climate Miracle is nature controls the climate. Our carbon dioxide emissions are irrelevant.

He received his BS in Engineering from the Caltech, his MA in Physics from Dartmouth, and his PhD in Physics from the University of Nevada. Berry’s PhD thesis is still cited as a breakthrough in cloud physics and numerical modeling. His model is used in biology, geology, and cosmology.

Berry is an American Meteorological Society Certified Consulting Meteorologist, and a pilot, with glider, power, and instrument ratings. Once, he flew a sailplane into a Nevada storm and then made a zero-zero landing on a Nevada dry lake in a severe dust storm.

He was the only civilian in a Department of Defense top-secret weather modification project in southeast Asia.

In his private business, he showed the Federal Aviation Administration how to prevent airline crashes caused by severe downdrafts.

Berry used his courtroom numerical model to successfully defend the accused of murder against California Attorney General. He modeled human body responses to heat and humidity inside a box inside a van on a trip from northern to southern California on a hot summer day. His model won the 1993 Microsoft Windows World Open “People’s Choice Award.”

As a graduate student at Nevada, his athletic performance earned him a membership in the elite Sigma Delta Psi national athletic honorary.

He and his wife Valerie as crew won sailing Gold Medals in the 1974 Canadian Olympic Regatta in Kingston, Ontario. They also won US national and North American championships in their high-performance 16-foot centerboard sailboat.

He has placed in the USA Top-10 age-group run-bike-run biathlons and track events. He holds age-group world records in Concept2 rowing.