Excerpt: Dr. Friederike Otto and the World Weather Attribution team studied Harvey and determined that climate change made the rainfall more intense, causing between 12% and 22% more water to drop on Houston and its surrounding area. It’s a relatively new science, determining “whether and to what extent anthropogenic — so human-induced — climate change alters the likelihood and intensity of extreme weather events,” Otto told Digital Trends.

In her new book, Angry Weather: Heat Waves, Floods, Storms, and the New Science of Climate Change, she explains how the World Weather Attribution project began and how its attribution reports can be used to help people sue greenhouse gas emitters.

If climate change made a heatwave three times more likely, then people can start looking at companies or institutions that caused the greenhouse gases of that event and try to hold them accountable. Though one such lawsuit was already dismissed, Otto thinks attribution reports are a crucial piece in getting governments to start changing their policies to create more carbon-neutral societies. 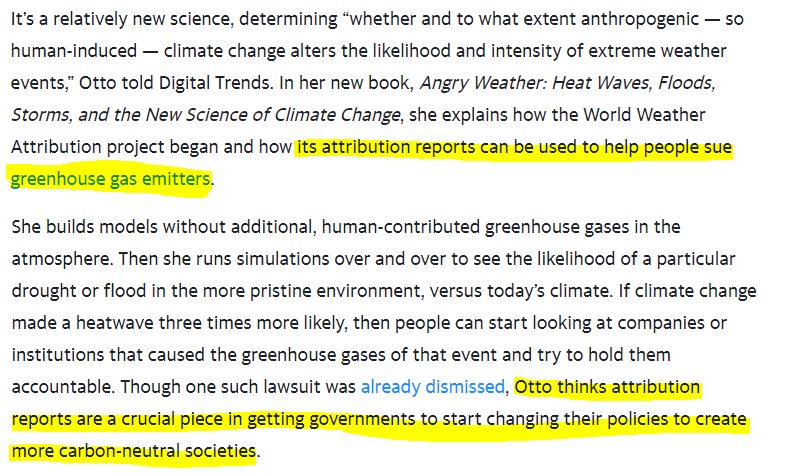 Here are the key facts via climate analyst Paul Homewood:

‘US land falling hurricanes have been at record low levels in recent years, and it is now more than ten years since a major hurricane hit.’

‘There has been a long-term decline in both the number of tornadoes, and particularly, the frequency of stronger ones.’

‘Droughts were much more commonplace, prolonged and severe prior to the 1970s.’

‘There is no indication of precipitation becoming more extreme. The wettest year was 1973.’

‘There has been a marked absence of extreme heatwaves in recent years, and nothing approaches the run of intensely hot summers in the 1930s.’

Science philosopher Karl Popper debunks AGW attribution: Science ‘must be falsifiable; & in so far as it is not falsifiable, it does not speak about reality’ – “It seems like nowadays just about every meteorological phenomenon is a result of global warming. Whether it be increased temperatures, decreased temperatures, tornadoes, earthquakes or even volcanic eruptions, climate change is always the answer, and the majority of these conclusions are drawn with sparing evidence, if any. Meanwhile, any skepticism or dissenting opinion regarding these countless studies is dismissed as unscientific, when in reality, it is quite the opposite.” ….

In its simplest sense, science is the formulation of hypotheses and the evaluation of said hypotheses through observation, experimentation or a mixture of both. What distinguishes science from pseudoscience, though, is whether or not these hypotheses can be disproven as well as proven, a trait known as falsifiability. According to Karl Popper, one of the most influential philosophers of science in the past millennium, “In so far as a scientific statement speaks about reality, it must be falsifiable; and in so far as it is not falsifiable, it does not speak about reality.” In context, the field of astrology — the study of the divine effect of the positions of celestial bodies on our lives — is pseudoscience because it violates this rule.

Rule Number One: Any model used in an event attribution study to quantify a linkage (weasel word) between climate change a specific extreme event should also produce accurate historical climate trends associated with the relevant phenomena. The claim that rainfall from Hurricane Florence was boosted 50% by climate change should have raised immediate doubts because observations have not shown an increase in rainfall related to landfalling hurricanes. Any event attribution study that cannot accurately replicate historical trends using the same model and methods is clearly fatally flawed…