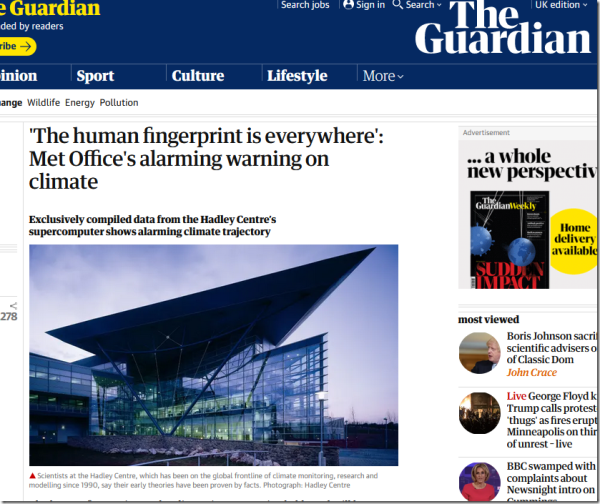 The human fingerprint on the climate is now unmistakable and will become increasingly evident over the coming decades, the UK Met Office has confirmed after 30 years of pioneering study.

Since the 1990s, global temperatures have warmed by half a degree, Arctic sea ice has shrunk by almost 2 million km2, sea-levels have risen by about 10cm and carbon dioxide in the atmosphere has increased by 60 parts per million (17%), according to figures exclusively compiled for the Guardian to mark the 30th anniversary of the Met Office’s Hadley Centre for climate science and services.

The data highlights how a young generation has grown up in a climate unprecedented in a millennium. Future projections suggest that by mid-century a 60-year-old Briton is likely to be living in a climate 1.2C warmer than when they were born.

Scientists at the Hadley Centre, which has been on the global frontline of climate monitoring, research and modelling since it opened in 1990, said early theories about fossil-fuel disruption have been proven by subsequent facts.

“The climate now is completely different from what we had 30 years ago. It is completely outside the bounds of possibility in natural variation,” said Peter Stott, a professor and expert on climate attribution science at the centre.

In the Hadley Centre’s early projections, he said, scientists forecast 0.5C of warming in the UK between 1990 and 2020 as a result of emissions from oil, gas and coal: “We got it spot on.”

Let’s take the claims one by one:

1) Since the 1990s, global temperatures have warmed by half a degree

There was a step up in global temperatures which began in the early 1990s, though disguised at first by the Pinatubo eruption. Since then there has been no noticeable underlying temperature rise, with the record dominated by El Nino events. Statistically, 1998 remains the warmest year on record, tied with 2016.

The Met Office themselves admitted the existence of the pause in 2013, when it published this paper:

Since then the only change has been the record double El Nino, which brought a peak in temperatures in 2016/17. Much of that heat still lingers in the Earth’s atmosphere.

Over the longer term, it is abundantly clear that it is the major ocean cycles, such as PDO and AMO, which dominate global temperature trends.

Again the Met Office are being extremely devious. The decline took place prior to 2007, since when sea ice extent has been stable.

3) Sea-levels have risen by about 10cm

Sea levels have been rising at the same steady rate since 1900, as the world’s climate emerged from the Little Ice Age, a time when glaciers expanded hugely.

There is no evidence of anything unusual occurring in the last thirty years, merely a continuation of much longer term and gradual changes.

Again, we can see that the jump in UK temperatures took place in the 1980s and 90s. For the last two decades, average temperatures have barely risen at all. This fact, of course, raises questions over the claim about fossil fuels. Given that CO2 emissions have been rising faster than ever since 2000, why have not UK temperatures followed suit?

The Met Office’s message is crystal clear – that the world will continue to warm, just as their models predicted. The facts, however, tell a different story.