RIP Princeton Physicist Freeman Dyson: One of the early scientists to study CO2 effects in 1970s – Rips current climate science: ‘If they did not scare the public they wouldn’t get support from the government’

Nat Geo excerpt: Freeman Dyson's criticism of climate science grew out of his own involvement with the JASON group and developed amid the nuclear winter debate with Carl Sagan and others. In his own simple climate model, Dyson underplayed the effects of greenhouse gases. Atmospheric physicists savaged his model for going against a broad consensus. That stung Dyson, who insisted that "global warming is grossly exaggerated as a problem." His skepticism continued to bring scathing criticism during his final years, as evinced in a New York Times Magazine article headlined "The Civil Heretic."

Flashback: Renowned Princeton Physicist Freeman Dyson: ‘I’m 100% Democrat and I like Obama. But he took the wrong side on climate issue, and the Republicans took the right side’

More Dyson: ‘CO2 is good for vegetation. About 15% of ag yields are due to CO2 we emit… it’s a real plus to burn coal and oil’

Dyson is also featured in book, The Politically Incorrect Guide to Climate Change.

Excerpt from Freeman Dyson's email to Climate Depot's Marc Morano on March 3, 2018: Dyson: "Congratulations for the success of the book and for the serious attention it is getting from people who matter. The experts will of course continue to put you down with a sneer. The people who matter are those who are not experts but can tell when they are being scammed. Keep up the good work! Yours sincerely, Freeman Dyson."

BY ANDREA STONE
A GREAT FIGURE in 20th-century physics, Freeman J. Dyson—the theorist who unified the world of the atom and the electron, a critic of nuclear weapons tests, a designer of space civilizations, and a steadfast climate change contrarian—died on February 28, 2020, in Princeton, New Jersey. He was 96 years old.

At his death, Dyson still maintained an office at the Institute for Advanced Study (IAS) in Princeton, New Jersey, where he took up residence in 1953 as a professor of physics. The IAS confirmed Dyson’s passing to National Geographic.

Freeman Dyson: Quotable Quotes: ‘We now have academic snobbery, the snobbery of people who think that just because they work at a university and have a Ph.D. after their name they are a superior breed and are entitled to despise others’

“The people who are supposed to be the experts and who claim to understand the science are precisely the people who are blind to the evidence…I hope that a few of them will make the effort to examine the evidence in detail and see how it contradicts the prevailing dogma, but I know that the majority will remain blind. That to me is the central mystery of climate science. It is not a scientific mystery but a human mystery. How does it happen that the whole generation of scientific experts is blind to obvious facts?” – Freeman Dyson, foreword in a report by Indur Goklany

FREEMAN DYSON: THE GREENING OF THE UNIVERSE

‘Sometime in the next few hundred years, biotechnology will have advanced to the point where we can design and breed entire ecologies of living creatures adapted to survive in remote places away from Earth. I give the name Noah’s Ark culture to this style of space operation.’ 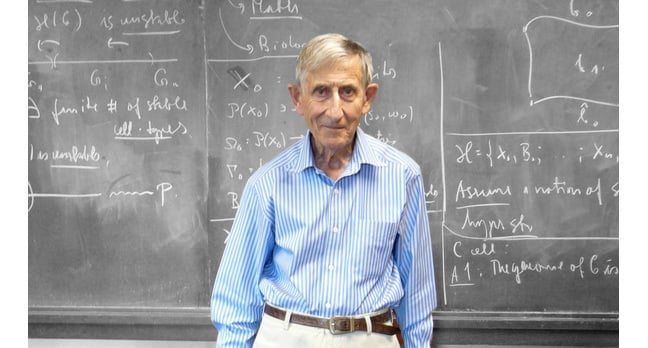 An Obama supporter who describes himself as “100 per cent Democrat,” Dyson is disappointed that the President “chose the wrong side.” Increasing CO2 in the atmosphere does more good than harm, he argues, and humanity doesn’t face an existential crisis.

‘What has happened in the past 10 years is that the discrepancies between what’s observed and what’s predicted have become much stronger.’

‘Pollution is quite separate to the climate problem: one can be solved, and the other cannot, and the public doesn’t understand that.’

Prominent physicist Freeman Dyson: ‘It would be crazy to try to reduce CO2’ – ‘Earth is growing greener as a result of carbon dioxide’

Dyson: ‘There certainly is an enormous religion in which there are lots of true believers who think that climate change is evil and that we’re going to run into big catastrophes if we don’t do something drastic. That’s a sort of belief system which exists…I don’t understand it and I don’t pretend to understand their motives.’

Renowned Princeton Physicist Freeman Dyson: ‘I like carbon dioxide’ – Warns ‘Climate experts have set themselves up as being the guardians of the truth…& that is a dangerous situation’

Q: Dyson asked if he is hoping we reduce Co2 levels:

0800 min: Dyson: ‘The effects of co2 on climate are really very poorly understood…The experts all seem to think they understand it, I don’t think they do…Climate is a very complicated story. And we may or may not understand it better (in the future). The main thing that is lacking at the moment is humility. The climate experts have set themselves up as being the guardians of the truth and they think they have the truth and that is a dangerous situation.

0900: Dyson: ‘I don’t think that’s sensible. It means you are doing huge damage to the environment…at cost of large amounts of money and very likely getting no benefits at all. I don’t think its a good bargain no matter which way you look at it.’

Climate ‘consensus’: ‘Is carbon dioxide the new cholesterol?’ Freeman Dyson: ‘Science of course is always correcting mistakes. That’s what it’s all about’

Climate science is infinitely more complicated than human physiology. Once all of the data are in, we may find that atmospheric carbon dioxide‚ actually has the effect predicted by physicist Freeman Dyson of the Institute of Advanced Study in Princeton. The 90-year-old Dyson, whom many consider to be the smartest guy on Earth, argues that far from harming the planet, atmospheric C)-2‚ may have a positive effect by increasing plant growth.

Perhaps you disagree. Fine, but you’re disagreeing with a guy who calculated the number of atoms in the sun when he was 5 years old and who’s been at the institute since Einstein was walking the grounds. Science requires taking the long view, said Dyson when I called him the other day. “Science of course is always correcting mistakes,” he said. “That’s what it’s all about.” It is indeed. What it’s not about is consensus.

Freeman Dyson — the world-renowned mathematical physicist: ‘I have strong views about climate because I think the majority is badly wrong’

Dyson: Global warming is ‘the only field in which I’m opposed to the majority. Generally speaking, I’m much more of a conformist, but it happens I have strong views about climate because I think the majority is badly wrong, and you have to make sure if the majority is saying something that they’re not talking nonsense.’

THE SCIENTIST AS REBEL: A TRIBUTE TO SKEPTIC FREEMAN DYSON ON HIS 90TH BIRTHDAY

On the occasion of his 90th birthday, we republish an CCNet-interview he gave Benny Peiser in March 2007