'The oceans heated less rapidly … from 2005 to 2017, than … from 1993 to 2005.' ...It’s obvious that the ocean heating rate – characterized by the slope of the graph – slowed down over this period, especially from 2003 to about 2008 when ocean heating appears to have stopped altogether. Both the IPCC’s table and figure in the report completely contradict its conclusions.This contradiction is important not only because it reveals how the IPCC is a blatantly political more than a scientific organization/

Part of the drumbeat accompanying the narrative of catastrophic human-caused warming involves hyping or distorting the supposed evidence, as I’ve demonstrated in recent posts on ice sheets, sea ice, sea levels and extreme weather. Another gauge of a warming climate is the amount of heat stashed away in the oceans. Here too, the IPCC (Intergovernmental Panel on Climate Change) and alarmist climate scientists bend the truth to bolster the narrative.

Perhaps the most egregious example comes from the IPCC itself. In its 2019 Special Report on the Ocean and Cryosphere in a Changing Climate, the IPCC declares that the world’s oceans have warmed unabated since 2005, and that the rate of ocean heating has accelerated – despite contrary evidence for both assertions presented in the very same report! It appears that catastrophists within the IPCC are putting a totally unjustified spin on the actual data. 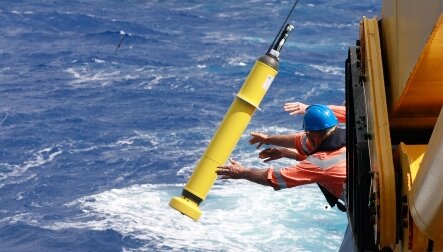 Ocean heat, known technically as OHC (ocean heat content), is currently calculated from observations made by Argo profiling floats. These floats are battery-powered robotic buoys that patrol the oceans, sinking 1-2 km (0.6-1.2 miles) deep once every 10 days and then bobbing up to the surface, recording the temperature and salinity of the water as they ascend. When the floats eventually reach the surface, the data is transmitted to a satellite. Before the Argo system was deployed in the early 2000s, OHC data was obtained from older types of instrument.

The table below shows empirical data documented in the IPCC report, for the rate of ocean heating (heat uptake) over various intervals from 1969 to 2017, in two ocean layers: an upper layer down to a depth of 700 meters (2,300 feet), and a deeper layer from 700 meters down to 2,000 meters (6,600 feet). The data is presented in alternative forms: as the total heat energy absorbed by the global ocean yearly, measured in zettajoules (1021 joules), and as the rate of areal heating over the earth’s surface, measured in watts (1 watt = 1 joule per second) over one square meter.

Examination of the data in either form reveals clearly that in the upper, surface layer, the oceans heated less rapidly during the second half of the interval between 1993 and 2017, that is from 2005 to 2017, than during the first half from 1993 to 2005.

The light and dark green bands in the figure show the change in OHC, measured in zettajoules, from the surface down to 2,000 meters (6,600 feet), relative to its average value between 2000 and 2010, over the period from 1995 to 2017. It’s obvious that the ocean heating rate – characterized by the slope of the graph – slowed down over this period, especially from 2003 to about 2008 when ocean heating appears to have stopped altogether. Both the IPCC’s table and figure in the report completely contradict its conclusions.

This contradiction is important not only because it reveals how the IPCC is a blatantly political more than a scientific organization, but also because OHC science has already been tarnished by the publication and subsequent retraction of a 2018 research paper claiming that ocean heating had reached the absurdly high rate of 0.83 watts per square meter.

If true, the claim would have meant that the climate is much more sensitive to CO2 emissions than previously thought – a finding the mainstream media immediately pounced on. But mathematician Nic Lewis quickly discovered that the researchers had miscalculated the ocean warming trend, as well as underestimating the uncertainty of their result in the retracted paper. Lewis has also uncovered errors in a 2019 paper on ocean heating.

In a recent letter to the IPCC, the Global Warming Policy Foundation has pointed out the errors and misinterpretations in both the 2018 and 2019 papers, as well as in the IPCC report discussed above. There’s been no response to date.