New Study: The Tropical Atlantic Was 7.5°C Warmer Than Current Temperatures At A Time When While CO2 Was 220 ppm

New Study: The Tropical Atlantic Was 7.5°C Warmer Than Now While CO2 Was 220 ppm

New Study: The Tropical Atlantic Was 7.5°C Warmer Than Now While CO2 Was 220 ppm

by Kenneth Richard
NoTricksZone: Not here to worship what is known, but to question it …Today, 08:39

Another new paper published in Paleoceanography and Paleoclimatology casts further doubt on the paradigm that says CO2 has historically been a temperature driver. 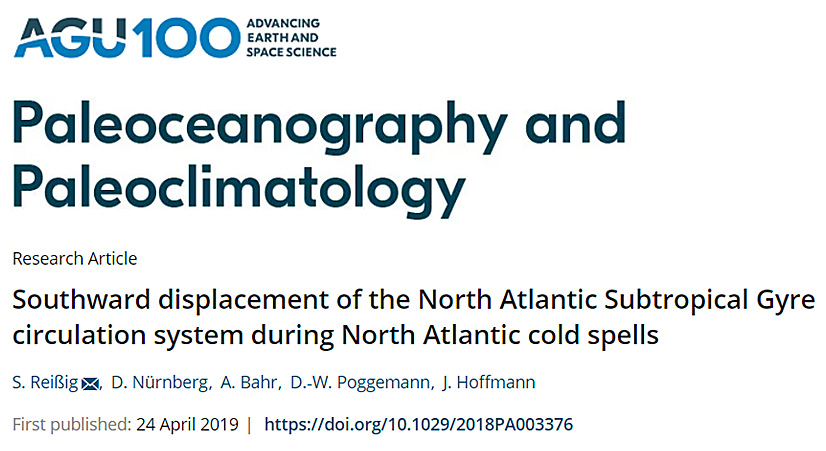 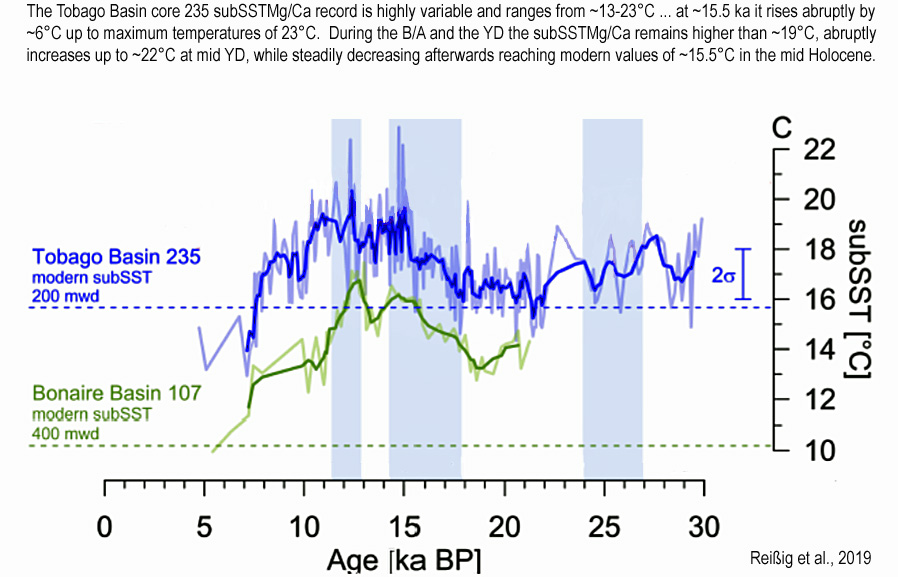 “[T]he Tobago Basin core 235 subSSTMg/Ca record is highly variable and ranges from ~13-23°C, which is approximately three times as much as at Beata Ridge.. In Tobago Basin, the subSSTMg/Ca decrease by ~2°C from 30 ka BP (18°C) to the onset of HS1 (16°C). Within HS1, the subSSTMg/Ca increase continuously by 2°C, while at ~15.5 ka it rises abruptly by ~6°C up to maximum temperatures of 23°C. The abrupt subSST rise is delayed too the reconstructed SST rise at the beginning of HS1 by Bahr et al. (2018) (Fig. S7). Subsequently, subSSTMg/Ca scatters around 20°C until the beginning of the Bølling-Allerød (B/A). During the B/A and the YD the subSSTMg/Ca remains higher than ~19°C, abruptly increases up to ~22°C at mid YD, while steadily decreasing afterwards reaching modern values of ~15.5°C in the mid Holocene. Lowest subSSTMg/Ca of ~13°C are observed after ~7 ka BP. On average, the LGM subSSTMg/Ca are warmer by ~2.5°C than during the Holocene.”

“[T]he subsurface temperature variability is a robust climate signal in the tropical W Atlantic. Both records show an increase of ~5°C in subSSTMg/Ca from the LGM to the early YD and a subSSTMg/Ca decrease by ~7-8°C during the Holocene suggesting that both sediment cores are influenced by the same oceanographic changes. Notably, the mid Holocene subSSTMg/Ca in Tobago and Bonaire Basins remain cooler by ~1.5°C and ~3°C, respectively, than during the LGM.”

“At Tobago Basin and Bonaire Basin, the deglaciation is characterized by abrupt rises in subSSTMg/Ca by ~5.5°C at the end of HS1 and by ~6°C at the middle of the YD to peak values of up to ~23°C and ~22°C, respectively, accompanied by changes towards saline conditions (mean δ18Osw-ivf of ~2.25‰ and ~2‰, respectively (Fig. 3). These highly variable changes occur within less than 400 years.”

“In contrast to modern conditions Tobago Basin core 235 was influenced by a warm water mass between 30-10 ka BP, indicated by elevated subSSTMg/Ca (~2.5°C warmer than the modern conditions).”