The NOAA has updated its tide gauge data for 2018 and says the average global sea level rise rate is 1.7-1.8 mm/yr.

Stations illustrated with negative trends (blue-to-purple) are experiencing global sea level rise and a greater vertical rise in the local land, causing an apparent decrease in relative sea level. These rates of relative sea level rise reflect actual observations and must be accounted for in any coastal planning or engineering applications. 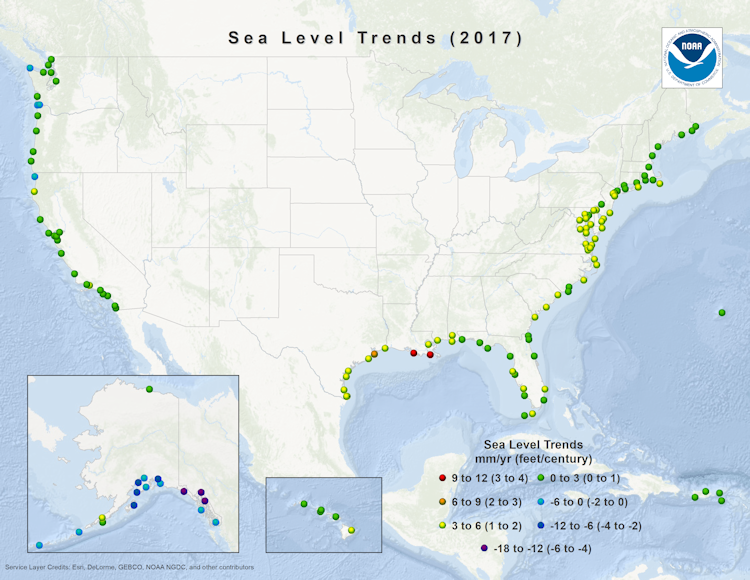 Analysis Debunks Absurd Sea Level Rise Claims About South Florida – Sea level rise in the Miami area is not accelerating and it is rising at a rate of about 1 foot per century.

Climatologist’s sea-level rise study disputes climate-disaster predictions – In many cases, ‘half of the sea-level rise is really from land sinking’ –  “Miami Is Sinking, But That Doesn’t Mean Sea Levels Are Rising”

Sea level expert Geologist Dr. Nils-Axel Mörner ridiculed the claim in Al Gore’s An Inconvenient Truth that Florida would be half covered by rising seas. “These are models. They are doing it wrongly, and this is lobbying. Geologic facts are on one side, lobbying and models are on the other side.” Morner added, “The rapid rise in sea levels predicted by computer models simply cannot happen.” …

Geologist Dr. Don Easterbrook: “If you look at the total global sea level from about 1850 until the present time it’s been rising at a fairly constant rate, rather slow—about 7 inches a century…. It’s about 1 to 2 mm a year so if you’re 50 years old you experienced a sea level rise about 3 ½ inches and you probably didn’t even notice it,”

Former NASA Climatologist Dr. Roy Spencer:  “Sea level rise, which was occurring long before humans could be blamed, has not accelerated and still amounts to only 1 inch every 10 years.” … Spencer on Miami flooding: “That flooding is mostly a combination of (1) natural sea level rise (I show there has been no acceleration of sea level rise beyond what was already happening since the 1800s), and (2) satellite-measured sinking of the reclaimed swamps that have been built upon for over 100 years in Miami Beach.”

U. Penn Geologist Dr. Robert Giegengack explains, “At the present rate of sea-level rise it’s going to take 3,500 years to get up there [to Gore’s predicted rise of 20 feet]. So if for some reason this warming process that melts ice is cutting loose and accelerating, sea level doesn’t know it. And sea level, we think, is the best indicator of global warming.”

No, ‘global warming’ and sea level rise are not threatening U.S. Naval facilities