12th IKEK: Nils Axel Mörner – the Kattegat and others among test areas for sea level 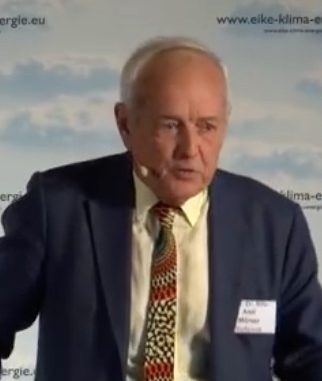 Mörner studied the Kattegat Sea between Denmark and Sweden. In this region sea level has not increased as announced by climate alarmists, but instead decreased. The actual oceanic increase in the past 125 years can be estimated as modest at 0.9 mm per year.

Stockholm’s tide record is the second longest in Europe; the mean long-term change in sea level is a decline of 3.8 mm per year. The country itself is rising 4.9 mm per year due to the post-glacial rise of the continental landmass. The difference of 1.1 mm per year is the true oceanic component.

In addition to European locations, Mörner also looks at the Indian Ocean and the Pacific. He has just returned from the Ouvéa area off Nova Scotia. In the 17th century, the sea level was 70 cm higher, as confirmed by immutable geomorphological facts.

At that time, the “Little Ice Age” with larger glaciers prevailed in the Alps (as Professor Patzelt showed). How could more liquid water be present at the equatorial area at the same time?

Video of the lecture (in English!)  by Prof. em. Axel Mörner at the 12th IKEK in Munich.

The phenomenon thus proves that the IPCC is wrong.

In warm times, the sea level does not rise globally. The reason for this is the so-called rotational eustasy of the planet: In the north, the volume of water increases a bit, at the equator it remains about the same.

Also other islands or coastal regions show a sea level change, such as the island Ouvéa, also the Fiji Islands, the Maldives and Goa in India. Here, too, the oceans sank around 1700, rose around 1800 and sank again after 1950.

Mörner emphasized that the solar cycles and gravity of our neighboring planets, the solar wind and the moon, determined our climate and our environment. The carbon dioxide greenhouse effect has no place.

With his presentation in Munich, the speaker wanted to send a message to the world climate conference COP24 in Katowice / Poland, which took place shortly after the EIKE conference. That message is: “Some of their statements fall into the area of ​​anti-scientific nonsense. The polar ice does not melt so quickly and the sea level does not rise in a short time. ”

Mörner recommends observing physical laws and the evidence from nature for the procedure of determining sea level.