New Study Reveals The Arctic Region Was 4.6°C Warmer Than ‘Present Day’ During The 1930s 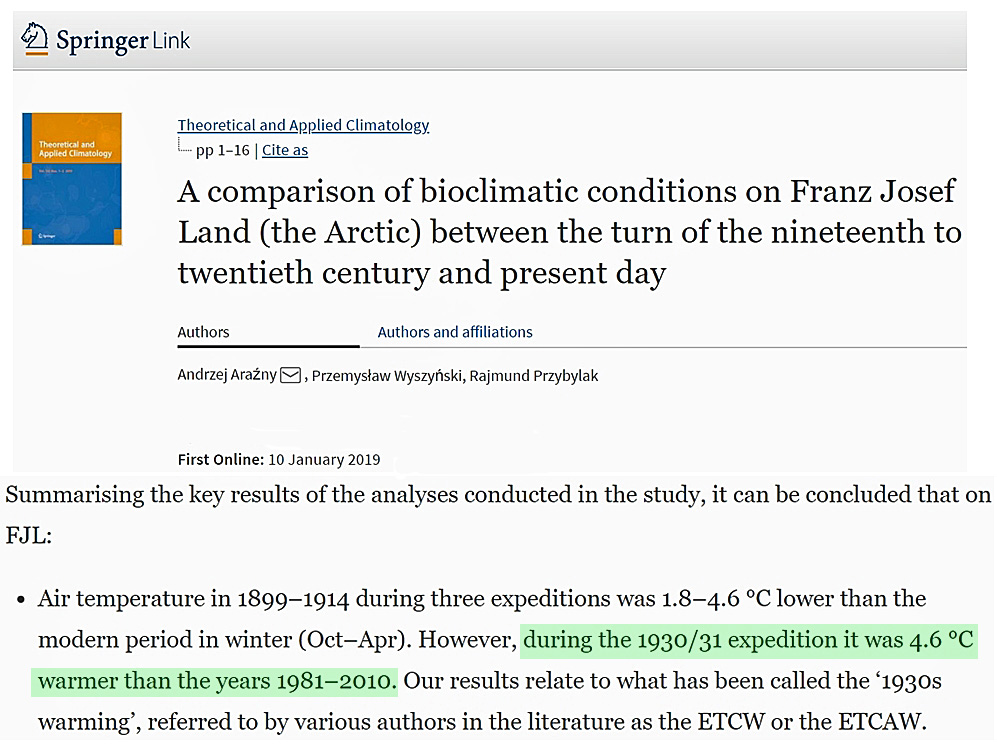 Yet another scientific paper presents evidence that the Arctic region was warmer than recent decades during the 1930s, leading scientists to conclude there is “still-insufficient knowledge of the mechanisms governing the Arctic Climate System.”

A comparison of bioclimatic conditions on

Franz Josef Land (the Arctic) between the

turn of the 19th to 20th century and present day

“In individual months, the highest negative anomalies were identified in Calm Bay (hereafter CB) in January 1914 (− 7.4 °C) and in February 1900 (− 6.8 °C). In contrast, during the 1930/31 expedition, it was 4.6 °C warmer than the present day in CB [Calm Bay]. Such a high thermal anomaly was influenced by a warm autumn and winter, especially February 1931, when the average monthly temperature was 10.7 °C higher than in the modern period.”

“In approximately the last 140 years, there have been two periods of significant temperature increases in the Arctic. The first began in around 1918–1920 and lasted until 1938 and has been called the ‘1930s warming’ (Bengtsson et al. 2004). Other works have referred to this period as the ‘Early Twentieth Century Warming’ (ETCW, Brönnimann 2009) or the ‘Early Twentieth Century Arctic Warming’ (ETCAW, Wegmann et al. 2017, 2018). Our results confirm the observations for the last expedition from the historical study period in 1930/1931. These years covered the warmest part of the ETCW.  In turn, the second increased warming of the Arctic began around 1980 (Johannessen et al. 2004) or according to Przybylak (2007) in about the mid-1990s. Changes in overall atmospheric circulation have long been believed to have been the cause of the ETCW (e.g. Scherhag 1937). As the modern climate warming (since 1975) has progressed in a largely similar manner to the progression of the ETCW (Wood and Overland 2010; Semenov and Latif 2012), there has been renewed interest in the insufficiently well-explained causes of the ETCW using the latest research methods, including, primarily, climate models. An analysis of the literature shows that the cause of such a significant warming in the present period is still not clear. There is even controversy over whether the main factors in the process are natural or anthropogenic, although the decided majority of researchers assign a greater role to natural factors (Bengtsson et al. 2004; Semenov and Latif 2012). It would appear that the greatest differences of opinion on the causes of the ETCW are to be found in works presenting climate models (see, e.g. Shiogama et al. 2006; Suo et al. 2013), which is an excellent illustration of the still-insufficient knowledge of the mechanisms governing the Arctic Climate System.” 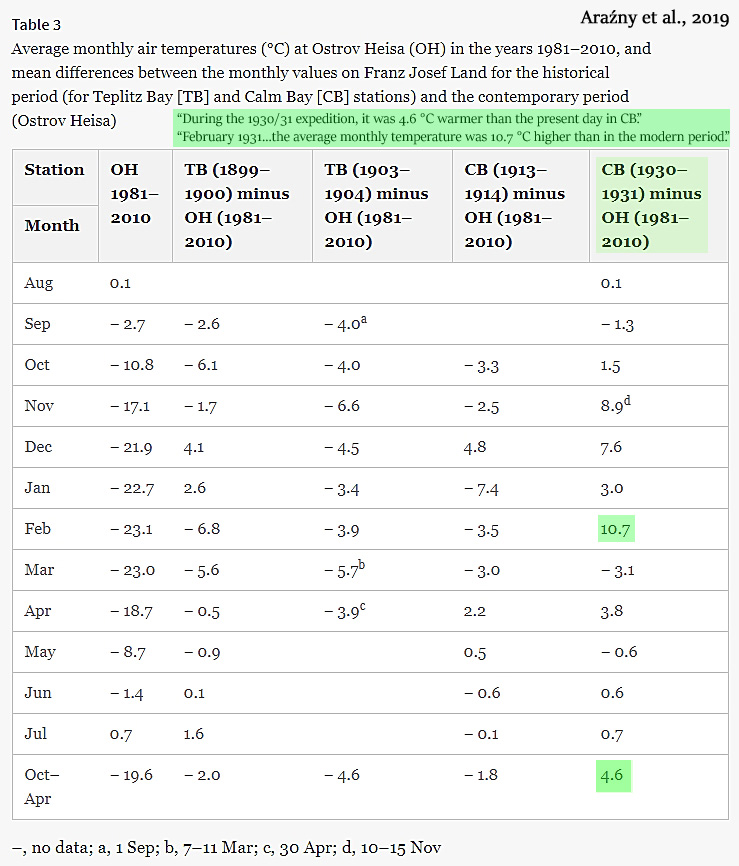 A reconstruction of warm water inflow to Upernavik Isstrøm

since AD 1925 and its relation to glacier retreat

“A link between the physical oceanography of West Greenland and Atlantic SSTs has indeed been suggested previously: a positive phase of the AMO [Atlantic Multidecadal Oscillation] is related to an increase of warm Atlantic waters flowing towards and along the SE and W Greenland shelf (Drinkwater et al., 2014; Lloyd et al., 2011). Our data indeed supports that the AMO influences bottom water temperature variability along the West Greenland shelf and shows that this influence is strong within Upernavik Fjord.

“Despite differences in the timing and magnitude of the retreat of the different glaciers, they broadly share the same retreat history. High retreat rates occurred between the mid ‘30s and mid ‘40s (400-800 m/yr), moderate retreat rates between 1965-1985 (~200 m/yr, except for Upernavik) and high retreat rates again after 2000 (>200 m/yr).”

“[O]ur study shows that while warming of ocean waters in Upernavik fjord likely contributed to the retreat phases during the 1930s and early 2000s, ocean warming is not a prerequisite for retreat of Upernavik Isstrøm.”

“This is important since it implies that the future potential oceanic forcing of Upernavik Isstrøm will depend on changes related to circulation in the North Atlantic (i.e. the AMO). Since the meridional overturning circulation strength and associated heat transport is currently declining, (Frajka-Williams et al., 2017), this may lead to cooling bottom waters during the next decade in Upernavik Fjord and most likely also other fjords in West-Greenland.” 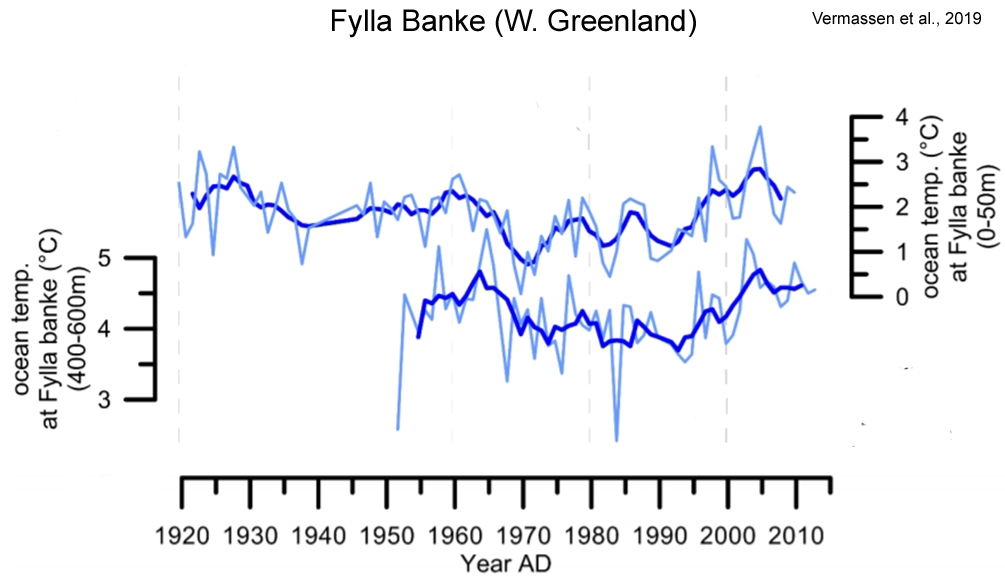