Far from the 2007 predictions of a 67% decline in global polar bear numbers, the new report reveals that numbers have risen to the highest levels in decades. 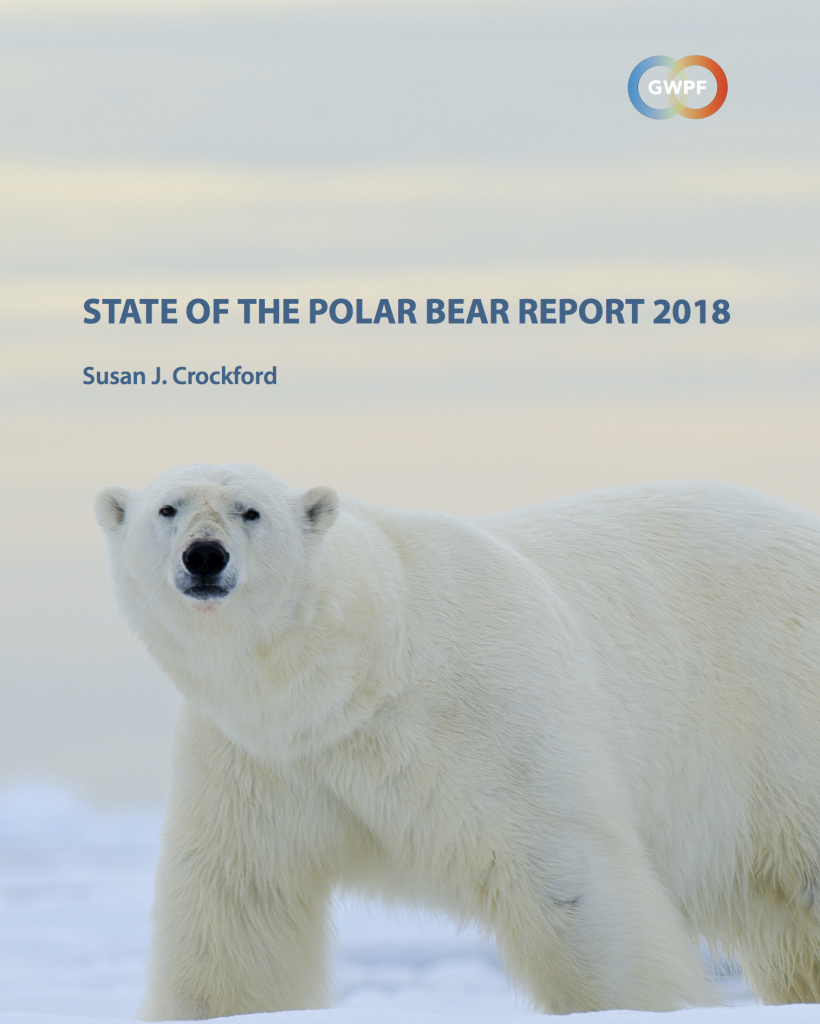 A new paper written by zoologist Dr Susan Crockford to mark International Polar Bear Day today has found that global polar bear numbers have continued to rise. Numbers have been steadily increasing since 2005, with 2018 data estimating the highest number of polar bears globally since they were protected by international treaty in 1973.

Numbers are so high that Inuit leaders have been pleading with he Canadian government for more polar bear population control as violent attacks against native populations have dramatically risen in recent years. Far from the 2007 predictions of a 67% decline in global polar bear numbers, the new report reveals that numbers have risen to the highest levels in decades. Happy International Polar Bear Day!

The 2018 State of the Polar Bear report, published today by the Global Warming Policy Foundation, confirms that polar bears are continuing to thrive, despite recent reductions in sea ice levels. This finding contradicts claims by environmentalists and some scientists that falls in sea ice would wipe out bear populations.

The report’s author, zoologist Dr Susan Crockford, says that there is now very little evidence to support the idea that the polar bear is threatened with extinction by climate change.

“We now know that polar bears are very resourceful creatures. They have made it through warm periods in the past and they seem to be taking the current warming in their stride too”.

In fact, it is the human residents of the Arctic Circle who seem to have most to worry about. With more and more bears on the landscape at all times of year, there have been worrying reports of people being threatened, mauled and even killed, particularly from Nunavut, in the Canadian north.

“The people of Nunavut are not seeing starving, desperate bears – quite the opposite. Yet polar bear specialists are saying these bears are causing problems because they don’t have enough sea ice to feed properly. The facts on the ground make their claims look silly, including the abundance of fat bears. Residents are pushing their government for a management policy that makes protection of human life the priority.”

· Data published since 2017 show that global polar bear numbers have continued to increase slightly since 2005, despite the fact that summer sea ice in 2018 was again at a low level not expected until mid-century: the predicted 67% decline in polar bear numbers did not occur.

· Despite marked declines in summer sea ice, Chukchi Sea polar bears continue to thrive: reports from the first population-size estimate for the region, performed in 2016, show bears in the region are abundant (almost 3000 individuals), healthy and reproducing well.

· National Geographic received such a profound backlash from its widely viewed ‘this is what climate change looks like ’ starving polar bear video, released in late 2017, that in 2018 it made a formal public apology for spreading misinformation.

· In Canada, where perhaps two-thirds of the world’s polar bears live, the Committee on the Status of Endangered Wildlife (COSEWIC) decided in 2018 to continue to list the polar bear as a species of ‘Special concern’ rather than upgrade to ‘Threatened.’

· Polar bear attacks made headlines in 2018: two fatal attacks in Nunavut, Canada and a narrowly averted death-by-mauling in northern Svalbard caught the world by surprise.