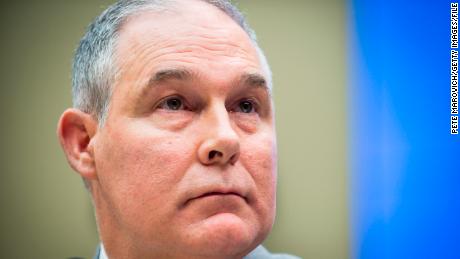 Washington (CNN)Oklahoma Republican Sen. James Inhofe said Wednesday he was nearing his limit with Environmental Protection Agency Administrator Scott Pruitt and that an agreeable alternative would be to replace Pruitt with his deputy.

“One of the alternatives would be for him to leave that job,” Inhofe said. “I would say this, that there’s a guy behind him in (EPA Deputy Administrator) Andrew Wheeler who is really qualified too, so that might be a good swap.”
Inhofe, in the interview with conservative radio host Laura Ingraham, expressed regret about his disappointment with Pruitt, whom he called a “good friend.” Both Inhofe and Pruitt are Oklahoma Republicans who were sharp critics of Obama-era environmental regulations.
Citing their shared background and beliefs, Inhofe said he was surprised by the near-constant churn of bruising stories about Pruitt’s ethics and personal conduct in office.
“All these things that are coming out are really not good things,” Inhofe said, adding later, “So I’ve kind of taken the position, if that doesn’t stop, I’m going to be forced to be in a position where I’m gonna say, well, Scott, you’re not doing your job.”
Inhofe made clear to reporters in the Capitol on Wednesday that he was “absolutely not” calling for Pruitt to resign. But Inhofe said he would like to talk to Pruitt about the “piling on” of ethics allegations so he can assess what is true and what is not.
“I’ve said there are a lot of things that he has done — I know him very well — some are not characteristic of him at all,” Inhofe said. “And I would like very much to have a communication with him about what is and what isn’t.”
Inhofe said he would support congressional hearings to examine Pruitt’s conduct but that was up to Sen. John Barrasso, R-Wyoming, who chairs the Environment and Public Works Committee, to call for them.
Inhofe used to chair the committee and now chairs one of its subcommittees.
Sen. Joni Ernst, R-Iowa, said on Twitter that she supported Inhofe’s call for a review of Pruitt by Congress and suggested President Donald Trump review Pruitt’s conduct as well.
“I support Sen. @JimInhofe’s call for a hearing on EPA Administrator Pruitt’s scandals; and I continue to urge the President to take a hard look at Mr. Pruitt’s actions — as I do not feel that Mr. Pruitt is serving @RealDonaldTrump’s best interests.

I support Sen. @JimInhofe’s call for a hearing on EPA Administrator Pruitt’s scandals; and I continue to urge the President to take a hard look at Mr. Pruitt’s actions – as I do not feel that Mr. Pruitt is serving @RealDonaldTrump’s best interests.

Twitter Ads info and privacy
In the interview, Ingraham said she was already at her breaking point with Pruitt and argued his “bad judgment” was hurting Trump and conflicting with the President’s “drain the swamp” message. Inhofe, in turn, said, “It hurts me to say this, but I agree 100% with you.”
The National Review, a conservative outlet broadly in support of Pruitt’s policies, echoed some of that sentiment in a piece published Wednesday calling for his exit.
“Pruitt is replaceable,” the piece read. “And he should be replaced.”
For months, Pruitt has faced questions about his use of official resources for personal reasons as well as ethical questions about his connections to lobbyists and others involved in industries he is tasked with regulating. At the same time, Pruitt has worked to roll back pillars of the Obama administration’s legacy on the environment and earned plaudits from conservative corners.
Trump has continued to vouch for Pruitt and said last week that Pruitt “is doing a great job within the walls of the EPA.”
Wheeler, whom Inhofe floated as a potential replacement for Pruitt, was confirmed to his position in April and previously worked in Inhofe’s office and as a lobbyist.
Ahead of the confirmation vote in April, Inhofe came to Wheeler’s defense and vouched for both his character and anti-regulation bona fides.