During The 800s-1300s AD, Wine Grapes Were Grown At Latitudes Where Polar Bears Now Roam 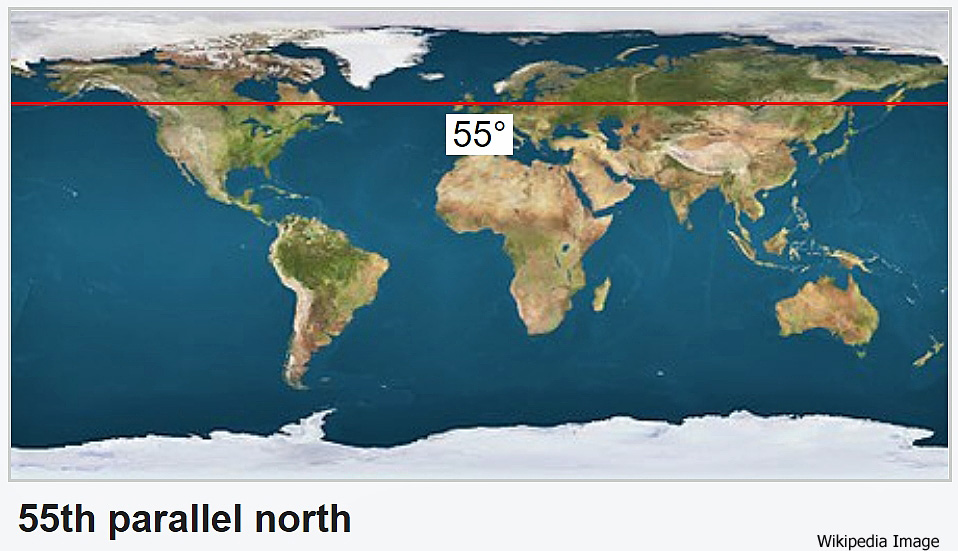 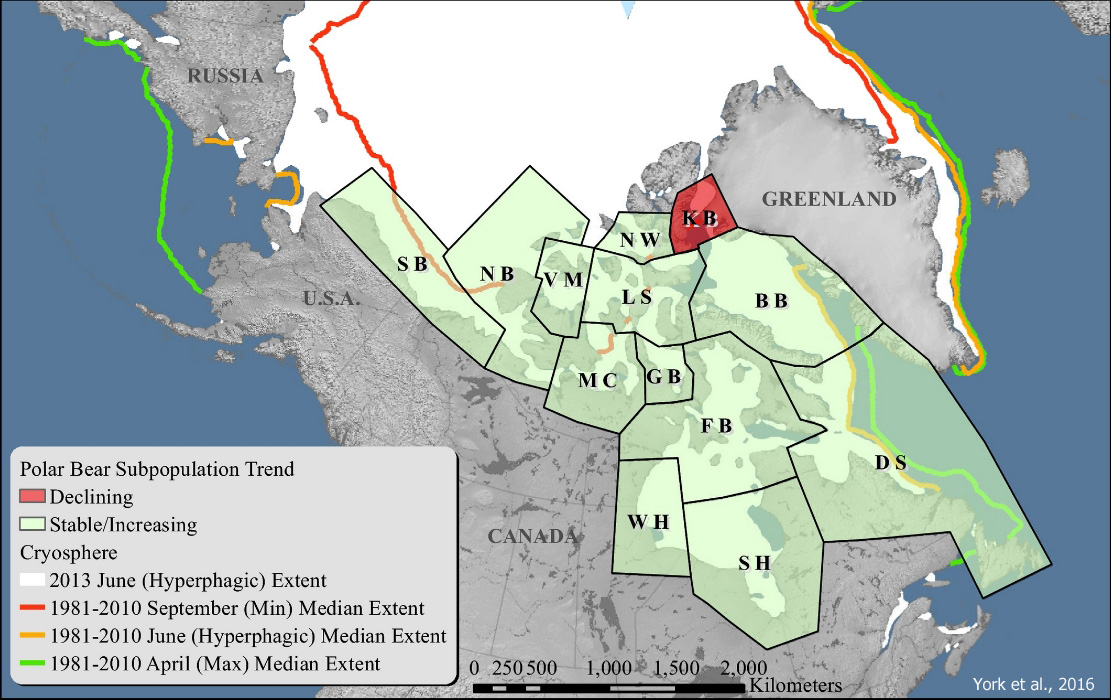 According to published geological evidence from the 1950s, remnants of wine grape vineyards have been unearthed in regions as far north as the polar-bear-inhabiting 55th parallel during the Medieval Warm Period (~800s to 1300s AD).

OUR CHANGING CLIMATE, PAST AND PRESENT

“There was a secondary optimum of climate between 400 and 1200 A.D., the peak probably being 800-1000 A.D. This was on the whole a dry, warm period and apparently remarkably stormfree in the Atlantic and in the North Sea. It was the time of lowland settlement in the Saxon lands and of considerable flowering of Celtic and Northumbrian cultures. Missions from the Celtic Church in Ireland were sent as far as Africa and Iceland. It was also the time of great Viking voyages and the settlement of Iceland and Greenland. The early Norse burials in Greenland were deep in ground which is now permanently frozen. There were several visits to America (probably many timbergetting voyages between Greenland and Labrador) and there is evidence which suggests that at least one Viking ship got through the North-West Passage and ultimately reached the Gulf of California (cf. Ives 1953).”

“In Domesday Book (1085) 38 vineyards were recorded in England besides those of the king. The wine was considered almost equal with the French wine both in quantity and quality as far north as Gloucestershire and the Ledbury area of Herefordshire where the soil is said to resemble that of the Rhine and Moselle wine districts. The London basin, the Medway valley and the Isle of Ely were also favoured districts.

The northernmost vineyards were near York [northern England] but the most favoured country was from Northants and the Fenland southwards. This implies summer temperatures perhaps 1 to 2°C higher than today, general freedom from May frosts (particularly suggested by the exposure to the north of several low-lying vineyard sites, e.g. at Tewkesbury, in the Fens and at Teynham, Kent) and mostly good Septembers.” 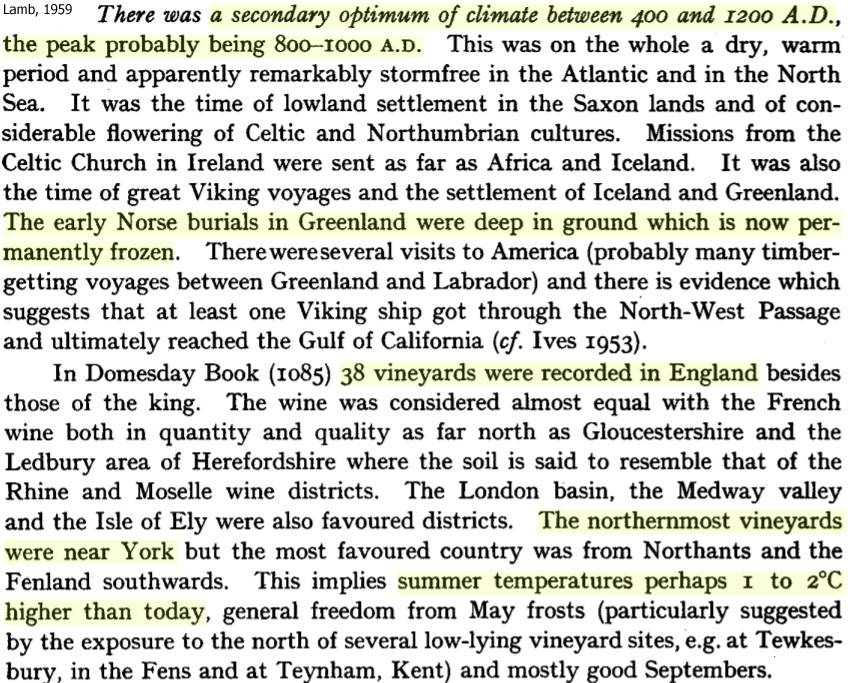 Wine Produced At 220 Meters Higher Elevation Than 1959…And Today

The highest vineyard in Germany today, located at Lake Constance, is still 560 m above sea level, the same maximum height as it was in the late 1950s.  The modern elevation is therefore 220 meters lower elevation for German wine-making than during the Medieval Warm Period.

“The Medieval Warm Period (MWP) was a time of warm climate from about 900 A.D. to 1300 A.D. when global temperatures were apparently somewhat warmer than at present. Its effects were evident in Europe where grain crops flourished, alpine tree lines rose, many new cities arose, and the population more than doubled. The Vikings took advantage of the climatic amelioration to colonize Greenland, and wine grapes were grown as far north as England where growing grapes is now not feasible and about 500 km north of present vineyards in France and Germany. Grapes are presently grown in Germany up to elevations of about 560 m, but from about 1100 A.D. to 1300 A.D., vineyards extended up to 780 m, implying temperatures warmer by about 1.0-1.4°C (Oliver, 1973). Wheat and oats were grown around Trondheim, Norway, suggesting climates about 1°C warmer than present (Fagan, 2000).” 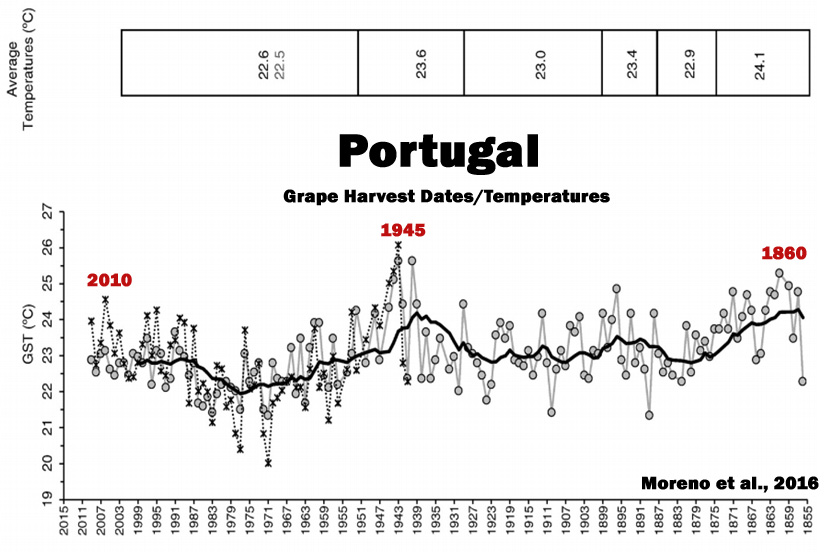