Via Urban Dictionary: RAVs - Russians, Arabs, and Villains. - "Mr. Naylor's here to see if we can't get cigarettes into the hands of somebody other than the usual RAVs." - Thank You for Smoking (2005)
UK Guardian: "Climate change is a common theme across a broad range of movies this year, either as an obvious baddie or a subtextual spectre."

In 2004, when climate change was still called global warming, it was considered sensational enough to get top billing in The Day After Tomorrow, a city-smashing blockbuster by disaster master Roland Emmerich. But the incremental death march of the real thing was considered a little too slow for Independence Day’s king of kablooey. So impatient was he to bring forth a biblical flood and subsequent ice age that was epic enough to swallow the Statue of Liberty, Emmerich conspired to make his cataclysm happen in days, not decades, courtesy of a cosmically unlucky (and scientifically unlikely) flash freeze. 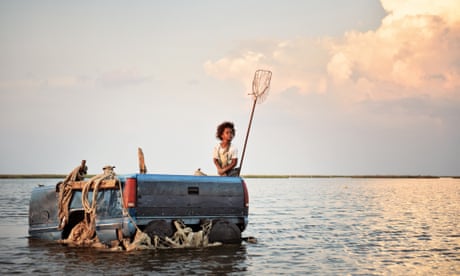 In 2017, the desire to accelerate climate change – even in the name of brash, mass-market pop art – is quaint yet horrifying. The nagging feeling that humankind may already have zoomed past some sort of ecological tipping point thanks to our voracious appetites for cheap energy and consumer goods seems increasingly undeniable. Previously, we looked to the multiplex to vicariously experience the catastrophic aftermath of freak super-storms and monster tsunamis; now we see these images appear with increasing and distressing regularity in the news.

Perhaps that is why climate change is a common theme across a broad range of movies this year, either as an obvious baddie or a subtextual spectre. The forthcoming eco-thriller Geostorm optimistically suggests that we could circumvent the cataclysmic heavy weather caused by climate change if only we tasked someone like scientist-astronaut Gerard Butler to invent a network of weather-controlling satellites. But when that system malfunctions, the planet reaps the whirlwind (not to mention mega-storms and tidal waves). Director Dean Devlin, who produced Independence Day with Emmerich, seems keen to outdo his old partner in terms of on-screen mass obliteration, with cities such as Dubai, Tokyo and Moscow in his apocalyptic sights.