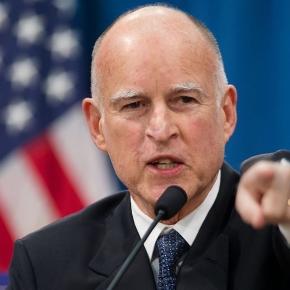 Is Jerry Brown California’s savior? – rstreet.orgA coalition of green and public interest groups has published a report that says Gov. #Jerry Brown (D-Calif.) was living up to his surname: he’s more ‘Brown’ than green. It accuses him of promoting the use of fossil-fueled power plants, allowing toxic emissions, and not limiting the state’s oil drilling. The 56-page report, written by 12 groups, pointed out #California now gets 60 percent of its electricity from fossil fuel facilities, a jump of seven percent since 2012.

Brown has been an enthusiastic supporter of solar and wind and is considered one of the country’s loudest global warming activists, second to Al Gore. One reason for the increase in natural gas power plants is the recent five-year drought that officially ended a few months ago. Many reservoirs didn’t have enough water to power hydroelectric plants, so the state turned to cleaner burning natural gas when permitting new power plants.

The report said Brown ‘encouraged’ a glut of power plants that has consumers paying for 20 percent more capacity than they need or will use. Some of the groups who co-wrote the report include the Food & Water Watch, Restore the Delta, Consumer Watchdog, and Physicians for Social Responsibility, and eight others. Restore the Delta opposes Brown’s plan to prevent freshwater from being dumped into the Pacific Ocean near the Sacramento-San Joaquin river delta, approved by many residents.

Consumer Watchdog accused Brown of governmental corruption, a charge Brown has refused to comment on furthering speculation. Brown’s spokesperson said it was the “same drivel, different day,” with the claims being nothing new against the governor. Food and Water Watch was livid over Brown’s political appointees considering reopening the Aliso Canyon gas storage field but at one-third its previous levels.

The storage field is owned by Southern California Gas Co. (SoCal Gas) whose parent company is Sempra Energy, where his sister draws a six-figure salary as a board member thus creating the appearance of a conflict.

A special investigation revealed the leak was caused by a metal pipe in a breached seven-inch casing of injection well SS 25. The 1950-era safety valves were also removed but not replaced. SoCal Gas believes the leak was less than 500 feet down the column used to move gas in and out of the well. The Aliso Canyon closure has led to a widespread strain on the state’s electrical grid.

Nuclear power fades in California as energy grid gets stressed

As California faces the possibility of energy blackouts, the state may be closing its last nuclear power plant.

The report also scolded Brown for “nurturing drilling and fracking,” a contention hurled against him after he fired regulators who delayed approval of fracking and gas drills in Kern County. Regulators, they charge, wanted assurances fracking wastewater didn’t contaminate ground water used for agriculture irrigation.

While Brown has signed #Climate Change legislation and other measures, he also neglected to fix the Oroville hydroelectric dam despite repeated warnings. He did find money for his ‘high-speed train to nowhere’ and illegal immigrant programs. He even passed legislation to regulate cow flatulence emissions and called his climate crusade akin to building Noah’s Ark.

Gov. Jerry Brown had been constrained in criticism of President Donald Trump, but on Tuesday, in an unusual State of the State address, he excoriated Trump without saying his name, and seemingly…

Taxpayers are also on the hook for Eric Holder’s $25,000-a-month fee ($300,000 per year) in his ongoing war with the Trump administration, despite the state employing hundreds of lawyers. He warned that if President Trump scuttled the weather satellite program the state would launch them instead.

Many pundits believe that Brown is setting himself up for a U.S. senatorial run or possibly as a 2020 presidential candidate as his final term comes to an end.