In turns out that polar bears are much more resilient to changing levels of sea ice than data collectors assume and the proof is in the current healthy populations everywhere.

If 10 years of summer sea ice levels expected to kill 2/3 of the world’s polar bears by 2050 hasn’t had an impact, why would anyone expect a bit less summer ice will do the job? 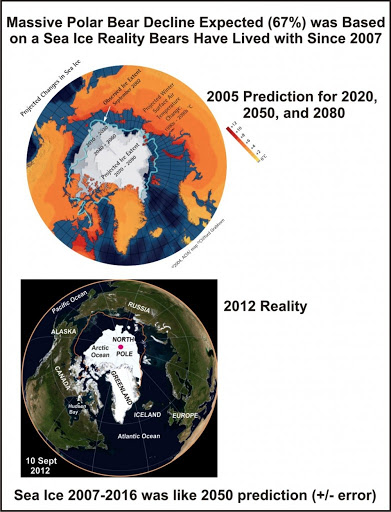 The more the polar bears fail to die in droves, the shriller the message from activist polar bear researchers – via willing media megaphones – that the great death of the bears will soon be upon us, just you wait and see!

Some big media guns were out this past week spreading the prophesy of doom fed to them by the polar bear researchers most committed to the “threatened with extinction” narrative: The New York Times, The Atlantic, The Guardian. The desperation is becoming palpable as the public catches on to their epic failure.

In 2007, the sea ice dropped to a level the experts said wouldn’t be reached until mid-century, and since then, it has remained at that low level (about 3-5mkm2, give or take some measuring error). And in 2007, US Geological Survey (USGS) biologists said with absolute confidence that when sea ice levels reached that point, 2/3 of the world’s polar bears would be gone.