Warmist Naomi Klein: ‘Climate change is violence’ – ‘When govts & corporations knowingly fail to act to prevent catastrophic warming, that is an act of violence’

'It is. Some of the violence is grindingly slow: rising seas that gradually erase whole nations, and droughts that kill many thousands. Some of the violence is terrifyingly fast: storms with names such as Katrina and Haiyan that steal thousands of lives in a single roiling event. When governments and corporations knowingly fail to act to prevent catastrophic warming, that is an act of violence. It is a violence so large, so global and inflicted against so many temporalities simultaneously (ancient cultures, present lives, future potential) that there is not yet a word capable of containing its monstrousness. And using acts of violence to silence the voices of those who are most vulnerable to climate violence is yet more violence.' 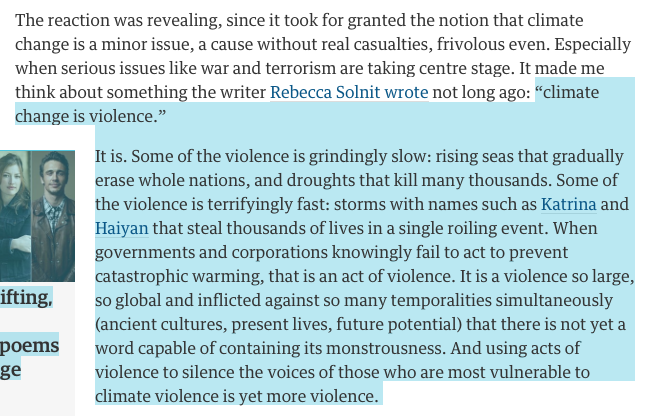