Morano: Warmists are embarrassed by 'flat-lining temperatures. So the whole movement has shifted to extreme storm' claims 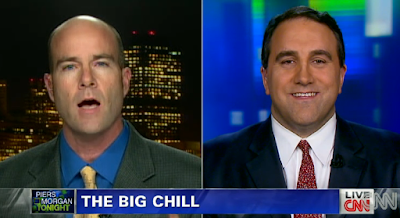 PIERS MORGAN, HOST: President Obama is making the fight against extreme weather part of his second term agenda. He believes that science proves it has a human cause. With me now is Marc Morano, editor in chief of ClimateDepot.com, and Michael Brune. He’s the executive director of the Sierra Club.

Welcome to you both. Michael — Marc, I’ll start with you. When I last spoke to you about this, we had a pretty fiery debate about it. And you were impeccably opposed to any suggestion that there’s any real science to confirm global warming or genuine climate change. So rather than me get involved with this, I’m going to rest my weary voice box and let Michael tell you why there is science.

Michael, over to you.

MICHAEL BRUNE, THE SIERRA CLUB: Sure, well, actually I don’t want to waste any time on this. The science is settled. We noticed that last year we had record numbers of wildfires throughout the Mountain West, as you cited; 61 percent of the country suffered a crippling drought. We had Superstorm Sandy with 1,000-mile diameter storm hitting the east coast, flooded my parents house, caused billions of dollars worth of damage.

The reality is that extreme weather is here. Our climate has begun to be destabilized. The good news is that we can do something about it. We have solutions to the cause of climate change. And those solutions will both help keep our families safe and help our economy grow at the same time.

MORGAN: OK. Marc, there you have it. What do you say to that?

MARC MORANO, CLIMATEDEPOT.COM: I say you look at the peer reviewed literature. We now know a study in journal “Nature” show that there’s 60 years, no trend in droughts. In fact, there was a decline in droughts in the U.S., except the most recent one in 2012, which wasn’t even as big as the one in the 1950s or the 1930s.

In terms of flood, 80 to 117 [correction 127] years, there’s no trend in floods. Big tornadoes are down dramatically since the 1950s — F3 or larger. And hurricanes, eight years now — the longest period without a major land falling category 3 or larger hurricane. Eight years, the longest stetch since 1900. So if you start looking at these measures —

MORGAN: Answer me this point. You wouldn’t dispute there’s been increased acceleration in CO2, right?

MORANO: No, CO2 is rising. Global temperature has now stalled for 15 or 16 years. And that is — now James Hanson of NASA has admitted at least decade of no warming, or as he said flat lining temperatures. This is an embarrassment right now.

So the whole movement has shifted to extreme storms. That’s what they’re trying to focus on now. Evidence is everywhere when you look for extremes. But the bottom line is we have always had extreme weather. In the 1970s, the CIA report and “Newsweek” and all the people worried about a coming Ice Age blamed extreme weather, droughts and bad weather and crop failure on global cooling. Now they have reversed and they are blaming the same phenomenon on global warming. It’s very convenient.

MORGAN: Michael, over to you?

BRUNE: Yes, Piers, I haven’t met Marc. I’m sure he’s a nice guy. He’s not a climate scientist. He runs a website that’s financed by Chevron and Exxon.

BRUNE: Why don’t I make my point. The peer reviewed science is in. Climate scientists around the world agree in overwhelming numbers that climate change is real. It’s here. It’s happening. And extreme weather is the new normal.

What is also true is that the United States has begun to fight this. Our CO2 levels have now reached 20 year lows. We’re back now to where 1992 was.

MORANO: Due to fracking.

BRUNE: As we get off dirty fuels, as we reject dirty pipelines from the tar sands, for example, or as we replace dirty coal plants with clean energy, we create more jobs; we support the local tax base; we grow the economy; we clean up our air, clean up our water, and we stabilize our climate.

The only folks who are against that are the oil companies, gas companies and coal companies that routinely fund the climate skeptics and climate deniers that you have on your show here tonight.

MORGAN: I have got to leave it there, sadly. I’m sure the debate will run. But my view remains why take the risk. I want my kids and their kids to live in a healthy planet.

MORANO: And CO2 is nothing to be — it’s pure fearmongering.

MORGAN: Chaps, thank you both very much.

Analysis of CNN Climate Debate by Physicist Dr. Lubos Motl: ‘When it comes to Morano’s ability to localize the relevant literature & data for a question, to figure out their implications…’‘…& to clearly present them — he would probably beat a vast majority of scientists & non-scientists on both sides of dispute’ — ‘Morano was able to efficiently & quantitatively explain in the highly limited room he was given that none of these ‘bad events’ actually has had any positive (i.e. harmful) trend in recent years or decades. These are just scientific facts’

Sierra Club’s Michael Brune during CNN Debate with Morano: ‘Our climate has begun to be destablized’ — but we can fix it by enacting Obama’s agenda. What the hell on earth?

‘Brune forgot that the Sierra Club took $26mm from nat gas to attack coal. Is that why Climate Depot’s Morano was cut off?’

Sierra Club gets fossil fuel funding: New York Times Feb. 13, 2012: ‘The recent disclosure of the Sierra Club’s secret acceptance of $26 million in donations from people associated with a natural gas company has revived an uncomfortable debate among environmental groups about corporate donations and transparency’

Watch Now: Climate Depot’s Morano on Canadian TV on Obama’s speech: ‘Skeptics are not denying reality, we are denying [the warmists’] fictional version of reality’ — Morano: ‘What more powerful storms? We are having a hurricane drought. Big tornadoes are down dramatically from 1950’s. There is no trend in droughts. There is no trend in floods’

Watch Now: Climate Depot’s Morano on Fox News on World Economic Forum $14 Trillion Climate Plan: ‘It implies that if we spend $14 trillion we can prevent another storm like Sandy’ — Morano: ‘With Obama now invoking God, this report is a serious threat…Governments cannot control weather and climate…but the report implies we can control the weather. At the same time it wants to control the economy. It’s as though the World Economic Forum report looked at Obama’s green stimulus and instead of seeing a fiasco — which it was — they looked at it and said wow, how can we expand this globally’