EU countries now import more natural gas from the U.S. than from Russia 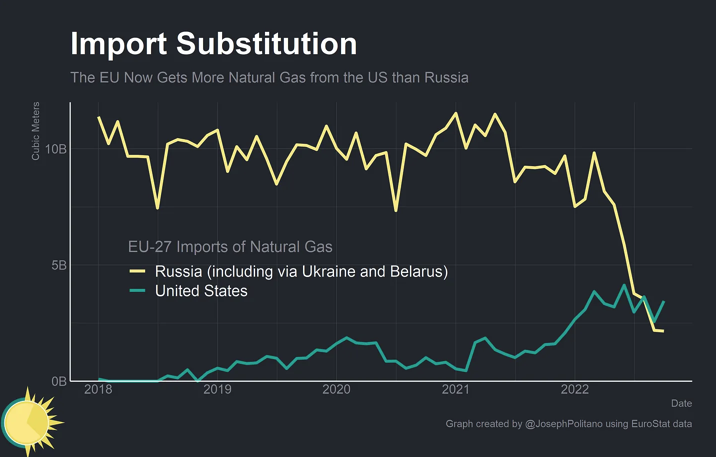 That you observe in those data. I have to wonder how much energy from other sources originates in Russia.

Pretty unbelievable, and not cost effective at all. Only took a war in Ukraine and 1.5 pipelines to blow up to make it happen.

No they don't. That's just gas. They still overall import more energy from Russia, by volume (but not by price).

By Joseph Politano
The European energy shortage was already acute before Russia’s invasion of Ukraine nearly one year ago—and the invasion itself turned a bad situation into a crisis. European countries depended on Russian energy products, especially natural gas, for their basic economic health and welfare, hence why energy was largely excluded from the original sanctions against Russia. Then, as the country’s military offensive in Ukraine began deteriorating, Russia began drastically reducing the amount of natural gas it sent to Europe in a bid to inflict economic pain on its foes and to gain the leverage necessary to reduce EU support for Ukraine. Today, the EU is being forced to decouple from Russian energy as gas exports to the EU have fallen by nearly 90% compared to pre-pandemic levels.

However, thanks to a rapid buildout of liquefied natural gas capacity, new sources of energy imports, reduced consumption, and fortuitously warm weather, the EU has significantly improved its energy outlook since this summer—and the worst possibilities for this winter look to have been avoided. The energy crisis is still a significant drag on European growth and a massive contributor to inflation, and markets still anticipate elevated natural gas prices until 2026, but the situation now poses less of an existential risk. Critically, European economies have been able to buy themselves more time—the most valuable resource in their efforts to become independent of Russian energy.