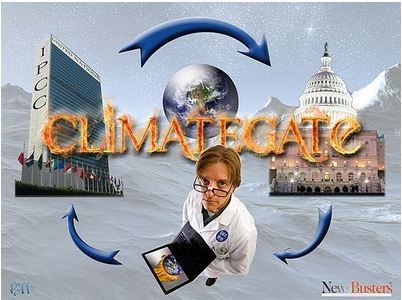 Excerpt: One high-profile site is climatedepot.com, run by Marc Morano, a former aide to U.S. Republican Senator James Inhofe, who is an outspoken critic of climate change policies.
Morano, who told Reuters he had also been the target of abusive emails, has been quoted as saying that climate scientists should be publicly flogged.
“The global warming scientists need to feel and hear the public’s outrage at their shenanigans like “climategate” … There is no advocacy of violence or hint that people should threaten them,” Morano said, adding: “Public outrage is healthy.”
#
Flashback: Don’t Let Media Whitewash Climategate! Read Chapter excerpt revealing the truth behind scandal

The Anniversary of Climategate scandal

UN IPCC exposed as “the best science that politics and activism could manufacture.”

Morano: “The Climategate scandal revealed that the UN IPCC was simply a lobbying organization portraying itself as a science panel. If the UN failed to find carbon dioxide was a problem, it would no longer have a reason to continue studying it—or to be in charge of offering ‘solutions’…The leading UN IPCC scientists were caught red-handed artificially manufacturing the “scientific consensus” for the global warming narrative. Their own words betrayed that they were acting like political partisans, not scientists—crafting a predetermined message rather than following the evidence. Climategate exposed the work product of the IPCC as the best science that politics and activism could manufacture.”

Morano: “When the scandal broke, the global warming establishment—led by the UN, academia, and the media—immediately went into move-along-nothing-to see-here mode. There were several high-profile “investigations” of Climategate that were obviously designed simply to restore credibility to the UN and climate scientists The global warming industry investigated itself and exonerated itself.”

Rex Murphy of the Canadian Broadcasting Corporation summed it up: Climategate “pulls back the curtain on a scene of pettiness, turf protection, manipulation, defiance of freedom of information, lost or destroyed data and attempts to blacklist critics or skeptics of the global warming cause.” Murphy added, “Science has gone to bed with advocacy and both have had a very good time.”

Clive Crook, writing for the Atlantic: “The Penn State inquiry exonerating Michael Mann—the paleoclimatologist who came up with ‘the hockey stick’—would be difficult to parody. Three of four allegations are dismissed out of hand at the outset: the inquiry announces that, for ‘lack of credible evidence’, it will not even investigate them…. You think I exaggerate?…In short, the case for the prosecution is never heard. Mann is asked if the allegations (well, one of them) are true, and says no.”