Death to humans! NYT profiles founder of ‘Voluntary Human Extinction movement’ – ‘Earth Now Has 8 Billion Humans. This Man Wishes There Were None’ 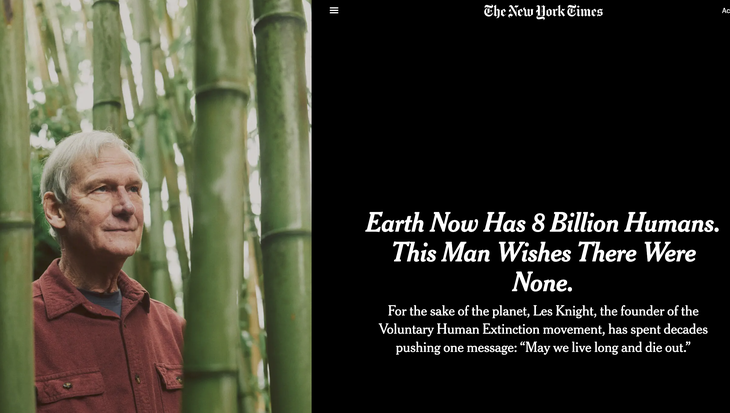 Lots of people want to save the Earth, but most of them are concerned about a deteriorating environment leading to human misery and extinction.

Les Knight, the founder of the Voluntary Human Extinction movement, wants human beings to go extinct in order to save the planet from us.

It is an unusual point of view, if not exactly unique these days. In his decades of arguing for the death of the human species he has picked up quite a few followers and garnered more than his share of attention. And with the world crossing the 8 billion population record for the first time, The New York Times decided to do a profile. I have to admit it was interesting on a number of levels and worth a read.

It’s not often one reads a profile of an actually happy person who wishes the human race would die off, and Les is apparently a happy-go-lucky guy with a bizarre preference for Gaia to people.

PORTLAND, Ore. — For someone who wants his own species to go extinct, Les Knight is a remarkably happy-go-lucky human.

He has regularly hosted meteor shower parties with rooftop fireworks. He organized a long-running game of nude croquet in his backyard, which, it should be mentioned, is ringed by 20-foot-tall laurel hedges. Even Tucker Carlson proved no match for Mr. Knight’s ebullience. During a 2005 interview with Mr. Knight on MSNBC, Mr. Carlson criticized him for espousing “the sickest” of beliefs but then added, “You are one of the cheeriest guests we’ve ever had.”

Mr. Knight, 75, is the founder of the Voluntary Human Extinction movement, which is less a movement than a loose consortium of people who believe that the best thing humans can do to help the Earth is to stop having children.

Mr. Knight added the word “voluntary” decades ago to make it clear that adherents do not support mass murder or forced birth control, nor do they encourage suicide. Their ethos is echoed in their motto, “May we live long and die out,” and in another one of their slogans, which Mr. Knight hangs at various conventions and street fairs: “Thank you for not breeding.”

No surprise he lives in Portland. Perhaps if I did I, too, would think the human race should disappear. Just kidding!

Most environmentalists express their love for the Earth in terms that appeal to human self-interest. We are depleting resources, killing off vital species, potential medicines in the rainforest are getting destroyed…you know the drill, and in many cases there is some truth to the warnings.

Human flourishing should be compatible with conservation, and the wealthier the society the more effort is put into preserving the environment. The more wealth, the healthier the Earth will be in the long run.

But it is rare to find anyone who publicly goes as far as Mr. Knight, who never had children and got a vasectomy in 1973 at the age of 25. Beyond advocating for universal access to birth control and opposing what he calls reproductive fascism, or “the lack of freedom to not procreate,” Mr. Knight says that despite our many achievements, humans are a net detriment to the Earth.

“Look what we did to this planet,” Mr. Knight said during a chat in his sunlit backyard one warm morning this fall. “We’re not a good species.”

What a bizarre point of view. It is based upon the idea that the ecosystem of the Earth is a kind of Eden, and human beings have brought in the original sin of consumption. This is so far from the truth that there is no way to reconcile the view with reality.