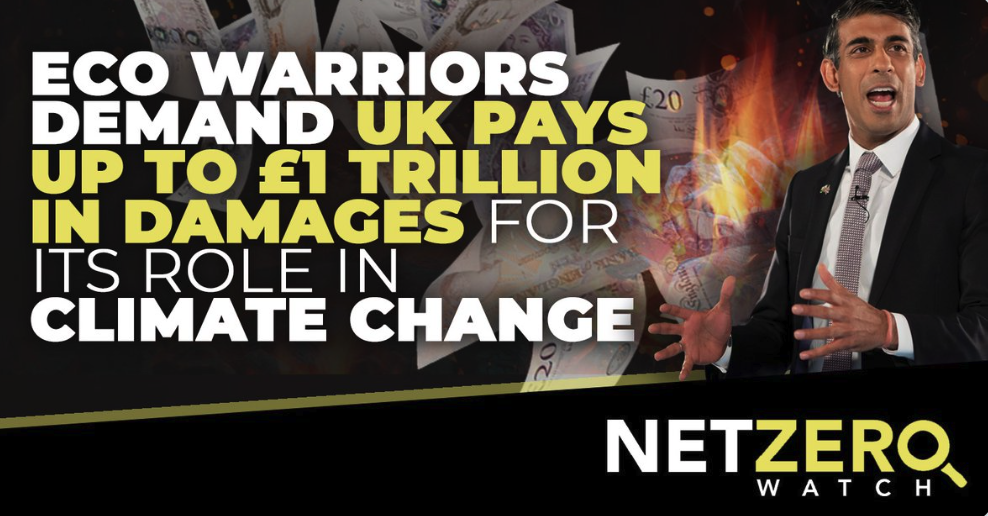 Eco warriors demand UK pays up to £1 TRILLION in damages for its role in climate change
Daily Mail, 7 November 2022

The demands came as the UN climate conference, Cop27, got under way in Egypt amid warnings the world is on a ‘highway to climate hell with our foot on the accelerator’.

Rishi Sunak echoed the late Queen’s words in his address to the Sharm El-Sheikh gathering this evening, as the Prime Minister reflected on the achievements of the UK’s hosting of last year’s Cop26 conference in Glasgow.

In his first speech to an international summit as PM, Mr Sunak reminded world leaders of Her Majesty’s address to that summit 12 months ago….

In a short speech, Mr Sunak also pledged the UK would triple its funding to help nations adapt to the impacts of climate change as he noted how ‘finances are tough’ both in Britain and across the world.

Mr Sunak insisted it was ‘morally right to honour our promises’ when faced with extreme events such as recent devastating flooding in Pakistan.

The PM also promised £65million investment in a range of green projects in Kenya and host nation Egypt. And he insisted Russia’s invasion of Ukraine was a reason to ‘act faster’ on climate issues as ‘climate security goes hand in hand with energy security’.

But Mr Sunak was also facing a storm tonight over discussions about ‘loss and damage’ – compensation payments to countries suffering the impacts of climate change – which are on the summit’s agenda for the first time.

Amid the demands by campaigners for Britain to stump up an astonishing £1trillion, former PM Boris Johnson said the UK simply ‘could not afford’ to hand over such vast sums – while another MP said paying any reparations was ‘complete and utter madness’.